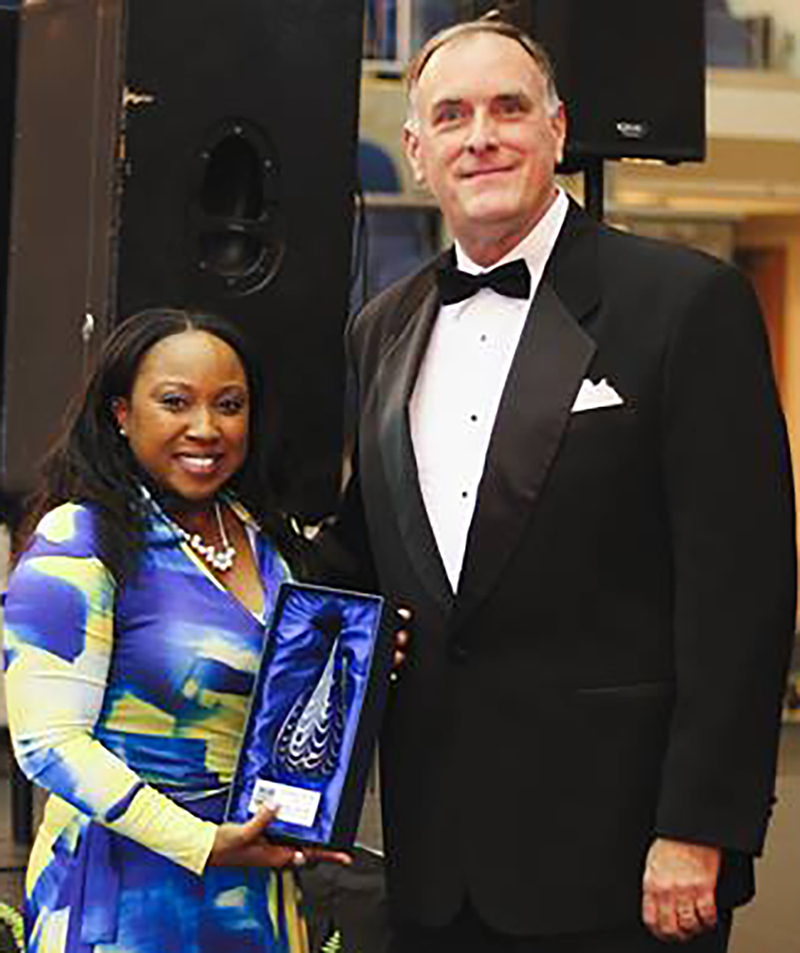 AMERICUS — Approximately 260 people gathered Saturday in the Storm Dome at Georgia Southwestern State University (GSW) for the third annual Paint the Town Blue Gala, an event to benefit the Smarr Smith Foundation. Americus Police Officer Nick Smarr and GSW Police Officer Jody Smith were shot in December 2016, while responding to a domestic disturbance call. Smarr died at the scene, and Smith succumbed to his injuries the following day. In the wake of the tragedy, a group of local citizens got together and founded the Foundation to honor the two young officers killed in the line of duty, and to provide funding for needed equipment, scholarships, and other needs of local law enforcement agencies.
The evening’s festivities included an auction, the magic of Eric Jones, dinner, followed by music from the Swingin’ Medallions.
The highlight of the evening was the announcement of the top employees of three local law enforcement agencies.
The Americus Police Department’s Employee of the Year was presented by Chief Mark Scott to Sierra Harvey, his administrative assistant. According to the introduction of Harvey, here’s what her colleagues had to say about her. “Within the last several years, the department has grown internally and externally. Mrs. Harvey has done a tremendous job of building the relationship between the department and community. No matter the need, Mrs. Harvey is always making herself available to ensure the needs of the department are met. Mrs. Harvey has taken the lead on several community events that have allowed for the community and department to interact with one another. Mrs. Harvey comes to work pleasant and ready to tackle any challenge. She is also on several committees throughout the city. Mrs. Harvey is also constantly encouraging everyone to participate in events and stay motivated.”
Balancing work and family, Harvey is also civically involved and serves on the Americus Times-Recorder’s Reader Advisory Committee. 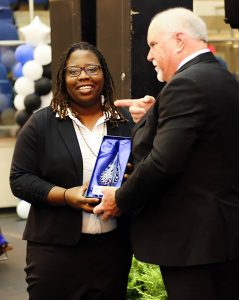 The Officer of the Year from Georgia Southwestern State University (GSW) Campus Safety was presented by Chief Mike Tracy to Officer Chelsee DeeAnne Wright. Wright grew up as the only child of Benjamin and Wanna Wright in Muscogee County. Her mother is a recruiter in the Bureau of Administrative Services at the Columbus Police Department where she has worked for more than four decades and holds the position of major. Her father recently retired after 35 years as a journalist at the Columbus Ledger-Enquirer newspaper.
After graduating from Pacelli High School, Wright earned degrees in biology and psychology, and was a student-athlete on the women’s soccer team at GSW. She currently attends Fort Valley State University, pursuing a master’s degree in biotechnology.
Outside of work and school, Wright said she finds time for a wide range of community projects, as an advisor of the Sigma Gamma Rho Sorority Inc. and co-advisor of the National Pan-Hellenic Council at Georgia Southwestern.
She currently serves on a team of police officers promoting the Back the Blue campaign through athletics in Albany. She is the recipient of the Phoebe Sumter Health Initiative award on behalf of her work through her sorority with women’s health and wellness in the community. She served on the Black Voters Matter campaign in 2018, and worked with the Sumter County Intermediate School by reading with students and helping with comprehension of materials.
Other community efforts include mentoring at-risk children at Furlow Charter School, working with the Girl Scouts in Sumter County as a mentor, and creating a team with local Americus residents and other organizations to keep children off the streets and to promote positive activities in the community. “I believe selfless service is key to helping to improve a community. As a God-fearing Christian, I believe that his work is a priority,” she said in her background material. 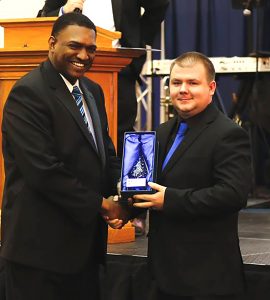 The Sumter County Sheriff’s Officer of the Year was presented by Chief Deputy Col. Eric Bryant to Deputy Brandon Glover. Glover is married and the father of two sons. He attends Cornerstone Church, enjoys the outdoors and fishing, watching football, cheering on the Atlanta Braves baseball team, and listening to county music. He grew up in Cuthbert in Randolph County with one brother and several sisters. The guidelines for his family were always to treat others how you want to be treated, help out whenever you can, and the belief that hard work always pays off. His moto is “Hakuna Matata” meaning “no worries.” This has been a way of life for him and now he is reaping the benefits.
Glover, according to the biographical information provided by the sheriff’s office, was scheduled to try out with a minor league baseball team the day he had an interview with the sheriff’s office, and he chose the latter.
He began working with the Sumter County Sheriff’s Office in 2010, as a bailiff for the courts, then moved on as a part-time civil assistant. He wanted more ways to give back to his community so he attended jail school, became a Detention Officer and then decided to attend the Police Academy.
After becoming a sheriff’s deputy, Glover also wanted to do something that no one else in his family has ever done and he will accomplish in May: graduate from college with an associate’s degree in criminal justice.
His colleagues refer to him as the “go-to guy” that will go above and beyond the call of duty and always have your back. Even though he worked as a deputy for a year without a patrol car he managed to get his duties completed. His career has excelled over the years by completing supervision training levels 1, 2, 3, and he is now a Field Training Officer. He also works with Superior Court Judge James Sizemore and the Southwest Judicial Circuit as a drug court surveillance officer.
“He was chosen as Officer of the Year for his hard work, positive attitude and professionalism. His dedication to his job, the drive to help others and willingness to go above and beyond the call of duty doesn’t go unnoticed. A phrase you might hear him say, ‘Gear up men; it’s time to take that hill!’”