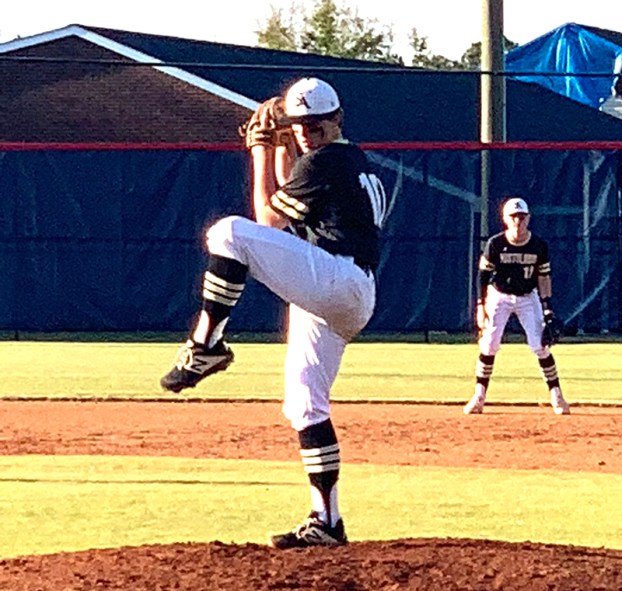 Southland Academy relief pitcher Chase Ledger struck out three batters, walked one and gave up no runs on one hit in 4.2 innings pitched. Photo by Ken Gustafson

Morgan struck out 12 Raider batters in 5.2 innings of work. He gave up two runs on seven hits and walked six.

This was a game in which the Raiders could not afford to make base running mistakes or to commit errors, but unfortunately, both of those things happened.

“We made some mistakes early. We knew that if we got behind by too much, it would be an issue. Unfortunately, that’s what happened. We couldn’t stop the bleeding,” SA head coach John Brady said. “The second inning cost us. It was the difference in the game. We won 2-0 the last five innings, but in the first two innings, we lost 5-0. It was a tough one, but we have to come back and go to work next week.” 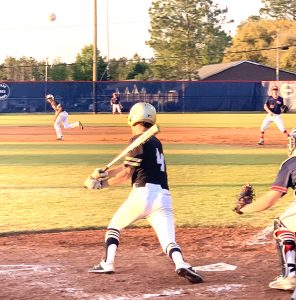 Southland Academy’s George Wall singles in the top of the fifth inning to try to get the Raiders back in the game against Deerfield-Windsor.
Photo by Ken Gustafson

Leading 1-0 going into the bottom of the second inning, the Knights scored four more runs to take a 5-0 lead. Will Gray led off the inning with a single off of SA starting pitcher Adam Smith. Gray then stole second base. This was followed by a walk to Jake Kinney and a wild pitch, allowing the runners to advance to third and second. Smith struggled to find the strike zone in the bottom of the second inning. He walked the next two batters, allowing DWS to score a run. Jack Kimbrel was then hit by a pitch, allowing another run to score. DWS scored two more runs in the inning to take a 5-0 lead. That would be more than enough for Morgan as he was able to shut down the Raider offense for most of the game.

The Raiders committed a total of three errors on the day, while the Knights committed two. The Raiders had runners in scoring position on more than one occasion throughout the game, but were unable to come up with the big hit.

SA scored their two runs in the top of the fifth. Tyler Kennedy led off the inning by reaching on an error. Hunter McCain followed that up with a single. After Luke Law struck out for the first out of the inning, Landon Law singled, driving in the Raiders’ first run of the game. Law was able to advance to second on the Knights’ second error of the game. George Wall then singled, driving in another run. The Raiders were back in the game and down by just three runs. However, Morgan was able to retire Owen Exley and Chase Ledger to end the Raiders’ threat. 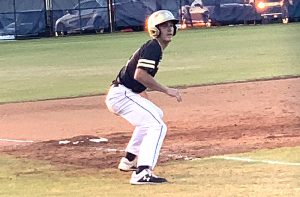 Southland Academy left fielder Landon Law gets his lead off third base in anticipation of scoring.
Photo by Ken Gustafson

The Raiders had another chance to get more runs in the top of the sixth. Freddie Updike led off the inning with a walk and then reached second on a wild pitch. However, Updike was picked off at second, which proved to be crucial. After Clay Owens struck out for the second out, Kennedy reached on a bunt single. Hunter McCain and Luke Law both drew walks to load the bases for Landon Law. Unfortunately for Law and the Raiders, he popped out to second base to end the inning.

The Raiders had one last chance in the top of the seventh. With two outs, Ledger singled. Ross Minick came in as a courtesy runner for Ledger and stole second base to keep the Raiders’ hopes alive. However, Updike struck out to end the game.

On a positive note, Hunter McCain went 2-for-2 with two singles, two walks and a stolen base. He also scored one of the Raiders’ two runs. Ledger pitched 4.2 innings of relief. He gave up no runs and only gave up one hit. He walked one batter and struck out three.

Up next for the Raiders is a trip to St. Simons Island, GA for the Frederica Invitational Friday and Saturday, April 5-6. Their next home game will be on Tuesday, April 9, against Tiftarea Academy. First pitch is scheduled for 4:30 p.m.

From Staff Reports   AMERICUS – The Georgia Southwestern State University baseball team took it on the chin this week... read more