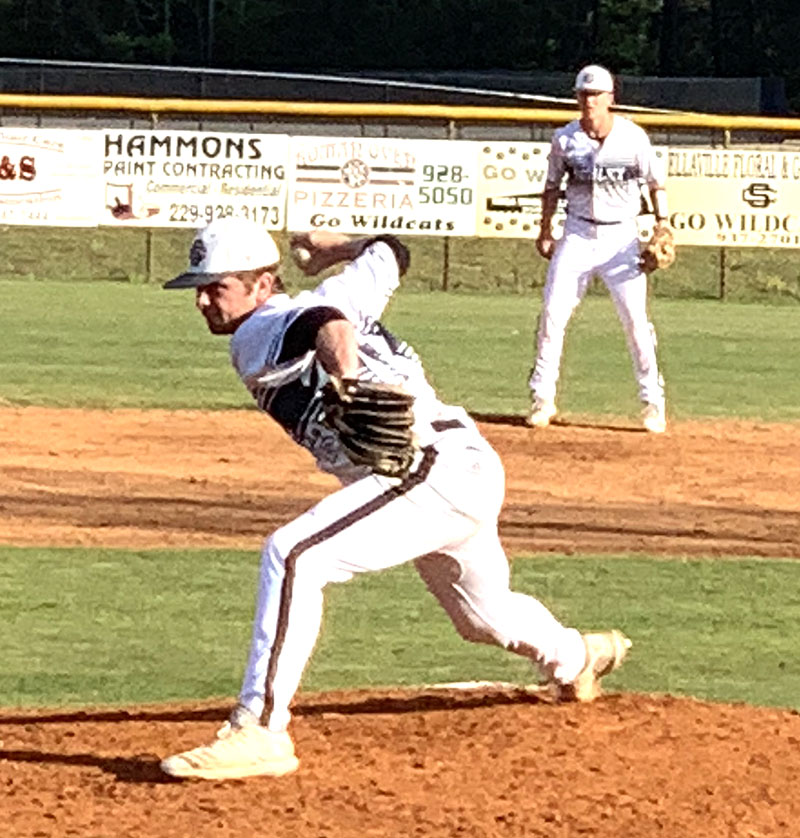 Schley County starting pitcher Garrett Peavy pitched two innings against Taylor County. He gave up no runs or hits, walked one and struck out two. Photo by Ken Gustafson

ELLAVILLE – It was another day at the office for the Schley County Wildcat baseball team. First baseman Dylan Windham knocked a two-run home run over the right field wall in the bottom of the fourth inning to complete a 10-0 shutout of Region 4-A opponent Taylor County on Tuesday, April 2, at Schley County High School.

SC head coach Chuck Cheek was extremely pleased with the all-around performance of his team. “It was good. We hit the ball well. We took advantage of some gifts they gave us early, such as some hit batters and some walks. We hit the ball hard behind it,” Cheek said. “Dylan Taylor had a good game going the other way with the ball. This was something that we’ve been working on. Dylan Windham had some big hits for us. He smoked that home run over the right field wall. Defensively, we made a couple of mistakes, but we’ve been playing a whole lot better defensively. I’ve really been proud of that.” Cheek went on to say that he was really pleased with the pitching in the game. Being that the Wildcats were able to amass a big lead early, it gave Cheek a chance to use multiple pitchers and give them some innings. 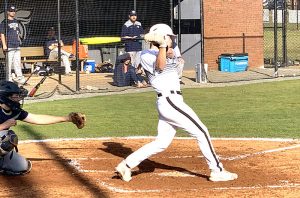 Schley County shortstop/pitcher Dylan Taylor gets a single. Taylor went 2-2 at the plate with a double and s single. He scored three runs and drove in an RBI.
Photo by Ken Gustafson

Dylan Taylor was the final pitcher used by the Wildcats. Taylor pitched the final two innings, giving up no runs, hits or walks and striking out one batter.

Taylor also had a solid day at the plate. He went 2-for-2, scored three runs and drove in an RBI. Dylan Windham was 1-for-3 with the two-run home run in the bottom of the fourth. In total, the Wildcats scored 10 runs on eight hits and committed four errors, while TC went scoreless on two hits and committed one error.

The Wildcats took advantage of two walks, two hit batsman and an error in the bottom of the first. As a result, they scored six runs on just two hits. Peavy singled to lead off the inning and Taylor belted a double.

Taylor led off the bottom of the second with a single. After Windham popped out to the pitcher, Ashton Goodin singled to center field, advancing Taylor to third base. Goodin was caught stealing second base for the second out, but Taylor was able to score on a passed ball, giving the Wildcats a 7-0 lead.

In the bottom of the third, Trypp Lumpkin got hit by a pitch, allowing him to reach first. Tyler Welch, who came in to run for Lumpkin, advanced to second on a wild pitch. Michael Wainwright then singled, driving in Welch to increase the lead to 8-0. 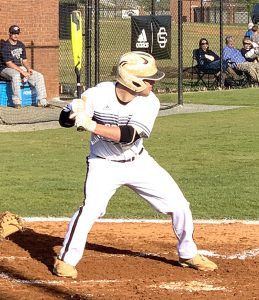 Schley County right fielder Trent Bivins went 1-for-2 with a double. He scored a run and drove in another in the win over Taylor County.
Photo by Ken Gustafson

The Wildcats put the icing on the cake in the bottom of the fourth. Taylor drew a walk to lead off the inning. Then Windham belted the two-run home run to complete the scoring for SC.

TC had one man on with one out in the top of the fifth due to a hit batsman, but Taylor was able to get Trent Bennett to hit into a double play to end the game. The game ended after 4.5 innings due to run rules.

With the win, the Wildcats improve their overall record to 17-1 and are still undefeated in region play at 11-0. Since their 10-3 loss to Johns Creek on Saturday, March 16, the Wildcats have won four in a row. They will try to continue their winning streak when they travel to Roberta, GA to take on Region 4-A opponent Crawford County on Tuesday, April 9. First pitch is scheduled for 6 p.m.