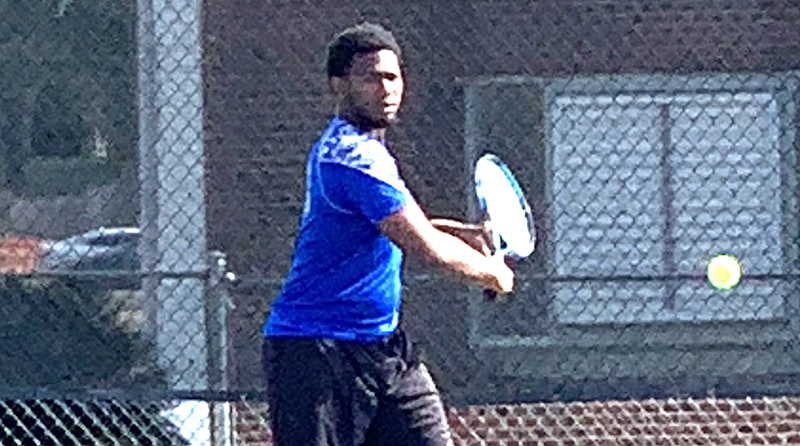 Americus-Sumter’s boys’ No. 2 player, Braxton Cross, returns a serve from Crisp County’s Jeremiah Bell. Cross defeated Bell 7-2 in a tiebreaker in the first set, then won the second set 6-1. Photo by Ken Gustafson

AMERICUS – ASHS boys head tennis coach Carl Willis and girls’ head coach Terri Lee were both hoping that their teams would finish the regular season strong when they hosted Crisp County on Wednesday, April 3, at the Americus-Sumter High School tennis complex on Wednesday, April 3. Unfortunately for both the Panthers and Lady Panthers, the visitors from the other side of Lake Blackshear had other ideas and were able to make those ideas a reality.

The Cougars and Lady Cougars soundly defeated both ASHS teams. ASHS girls’ No. 1 player Teigan Pepito lost to Jordan Lawson in straight sets 0-6, 1-6. The Lady Panthers’ No. 2 player, Kirby Perry, fell in straight sets to Audrey Mercer 3-6, 2-6. Rebecca Ingle was the final hope to keep the Lady Panthers’ hopes alive for a team win. However, Ingle lost to Hannah Cook 2-6, 4-6. The loss insured that the Lady Cougars would win the girls’ team match. 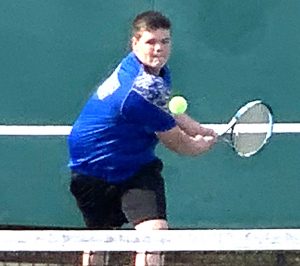 ASHS doubles player Christopher Wooden about to return a serve in his doubles match.
Photo by Ken Gustafson

The ASHS girls’ doubles teams tried to salvage some wins to keep from getting shut out. However, things did not go so well for them either. The Lady Panthers’ duo of Taylor Garcia/Hannah Martinez lost to the Lady Cougars’ duo of Brittany Bertelson/Bailey LaGrone 1-6, 3-6. The ASHS duo of Israel Broomfield/Courtney Dew tried to keep the team from being totally shut out in the match, but the Lady Cougars’ team of Tatum Coleman/Tess Stripling won the doubles match in straight sets 1-6, 0-6. The ASHS girls’ team lost the match to the Lady Cougars 5-0.

The ASHS boys’ team came into Wednesday’s match with the intention of getting a win to give them momentum going into the Region 1-AAAA Tournament. However. The Cougars won the match 4-1. The lone singles win for the Panthers came when Braxton Cross defeated Jeremiah Bell. The first set ended in a tiebreaker, with Cross edging out Bell 7-2 in the tiebreaker. Cross easily won the second set 6-1 to win his match. Unfortunately for the Panthers, that would be the only win in singles and doubles play. 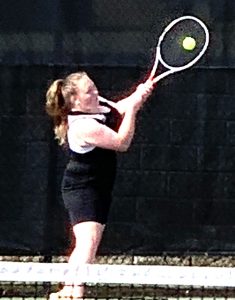 Aaron John Ndaayezwi, the ASHS No. 1 boys’ player, lost to Fabian Bartell in straight sets 2-6, 0-6. Zach Johnson fell to Nathan Willis 2-6, 2-6. This gave the Cougars a 2-1 lead overall, but the Panthers had a chance to take the match if their doubles teams could come through. However, that would not be the case. The ASHS doubles team of Keldrich Flemming/Christopher Wooden lost in a hard-fought match to the CC team of Tyler Adams/Drew Braziel 4-6, 4-6. That ensured victory for the Cougar boys’ team. The only thing that would matter now is whether or not the Cougars would win 4-1 or 3-2. The Panthers could still salvage a doubles win with the team of Chandler Reddix/Aaron Lewis. However, Reddix and Lewis lost to the Cougars’ duo of Dayshawn Collins/Ryland Reed in straight sets 2-6, 1-6. The Panthers had fallen to the Cougars 4-1.

For both the ASHS girls’ and boys’ teams, it’s now on to the Region 1-AAAA Tournament, which will take place on Tuesday and Wednesday, April 9-10. Time and location are still to be determined.