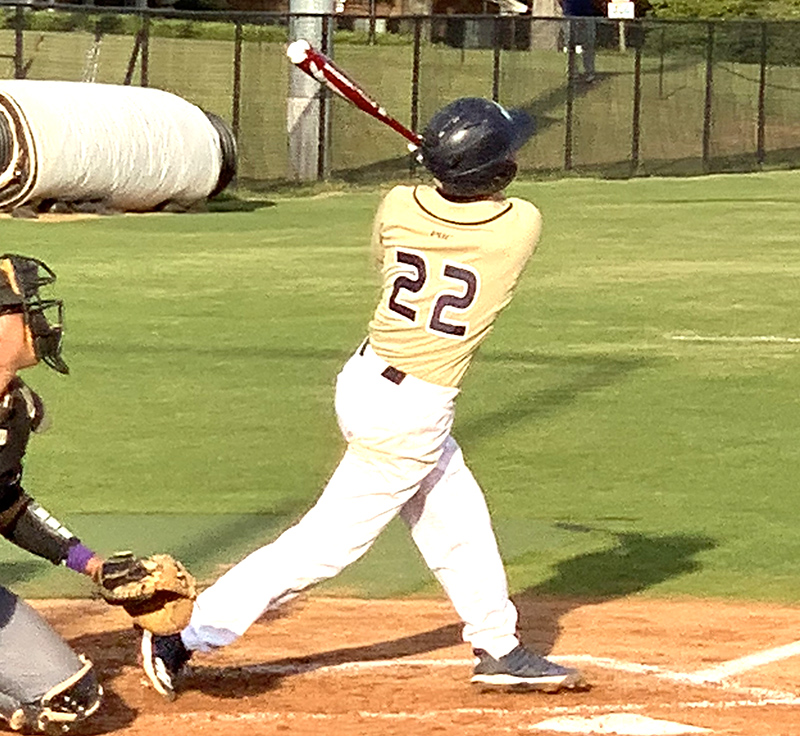 GSW third baseman Jamison Wilks went 2-for-4 at the plate with two singles and drove in two RBIs in the Hurricanes’ loss to Middle Georgia State. Photo by Ken Gustafson

AMERICUS – The Middle Georgia State University Knights scored five runs in the top of the first inning and set the tone for what would be a 15-3 blowout win over the GSW Hurricanes on Wednesday, April 3, at Hurricanes Stadium.

MGSU, ranked #8 in the country in the most recent National Association of Intercollegiate Athletics (NAIA) Top 25 poll, dominated early and never looked back on their way to the 15-3 win.

The Knights improve to 28-8 on the season, while the Hurricanes drop to 12-24 overall and are 6-12 in the Peach Belt Conference. The Hurricanes have now dropped four straight games.

The game began inauspiciously for the Hurricanes when their starting pitcher, Stewart Tyler, was pulled after just facing to hitters in the top of the first in favor of reliever Cole Garrett. Tyler hit the leadoff hitter, Trenton Nash. He then walked Robbie Hanlon III, putting runners on first and second with nobody out. 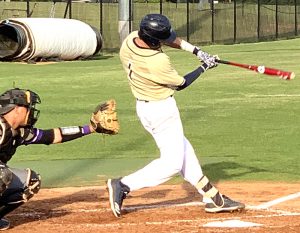 GSW first baseman Tyler Skelton went 2-for-4 at the plate with a single and a double. He also scored a run.
Photo by Ken Gustafson

At this point, GSW head coach Josh McDonald had seen enough. McDonald replaced Tyler with Garrett to try to stop the early bleeding. However, things didn’t get much better. The Knights’ designated hitter, Blake Jackson, singled home an RBI to give MGSU an early 1-0 lead. They followed that up by scoring four more runs in that inning via another walk and two more hits. Before they even began their first at bat, the Hurricanes found themselves down 5-0 to the Knights.

Though the Hurricanes tried to get the bats going, they struggled against MGSU starting pitcher Dalton Rentz. Rentz pitched six innings, allowing three runs on six hits. He walked none and struck out eight Hurricane batters. Rentz went on to become the winning pitcher, and his record is now 3-1 on the season.

The Hurricanes tried to get some offense going in the bottom of the second. Outfielder Hunter Foster led off by getting hit by a pitch. He then made it all the way around to third on a passed ball. After Andy Moore flew out for the first out of the inning, Tyler Skelton singled and advanced to second on the same passed ball. GSW had runners at second and third with one out with a great opportunity to score some runs to close the gap. However, Jamison Wilks flew out and Jeremiah Barnett struck out to end the inning. 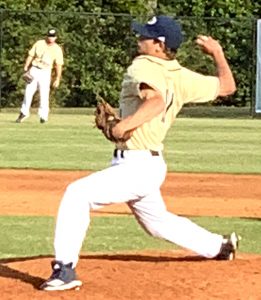 GSW relief pitcher Cole Garrett came on in relief in the first inning to try to pitch out of a jam. Unfortunately, he gave up five runs on four hits. He walked two and struck out two in 3.1 innings pitched.
Photo by Ken Gustafson

The Knights added another run in the top of the second and two more in the top of the fourth to take an 8-0 lead. Both Nash and Hanlon drew walks to begin the fourth. Then Jackson doubled for his second RBI hit of the game, followed by a fielder’s choice by Zach Cornell, which scored another run. In the bottom of the fifth with nobody out, Wilks singled and advanced to second on a balk called against Rentz. The Hurricanes had a runner in scoring position. However, Jeremiah Barnett struck out, Jacob Harrell hit into a fielder’s choice and Jason Baita struck out to end the threat.

In the top of the sixth inning, GSW pitcher Jared Donalson came on in relief of Hayden Martin. Martin pitched 1.2 innings, allowing one run on two hits. He walked three and struck out one. Donalson walked Jackson to start off the inning. After Cornell flew out, MJ Rookard belted a two-run home run to give the Knights a 10-0 lead. Fortunately for GSW, Donalson was able to get out of the inning without any further damage. 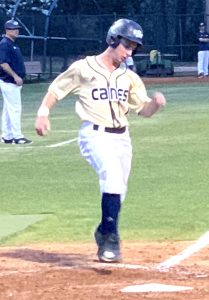 GSW shortstop Matthew Mamatas scores the Hurricanes’ first run of the game. Mamatas went 1-for-5 with a double and scored a run against Middle Georgia State.
Photo by Ken Gustafson

The Hurricanes finally were able to score some runs in the bottom half of the sixth.

Shortstop Matthew Mamatas led off with a double. Jonathan Martin flew out and Hunter Foster hit into a fielder’s choice. However, Andy Moore singled, driving in Mamatas for the Hurricanes’ first run of the game. Skelton followed this with a double. Wilks then singled, driving home Moore and Skelton to cut GSW’s deficit to 10-3. Though they were still down by a lot of runs, the Hurricanes were finally able to cash in with runners in scoring position and still had hopes of getting back in the game.

However, those three runs would be the final runs scored by GSW in this game. The Knights scored three runs in the seventh and two in the ninth to seal the 15-3 victory.

In total, MGSU scored 15 runs on 12 hits and committed two errors. GSW scored three runs on seven hits and committed no errors. One problem the Hurricanes had in this game was the number of walks issued by GSW pitchers. GSW used seven pitchers in this game. They gave up a combined 11 walks and struck out a combined total of 9 MGSU batters. MGSU used three pitchers. They combined for only one walk and 14 strikeouts. GSW starter Stewart Tyler, who only faced the first two batters of the game, ended up being the losing pitcher and is now 1-3 on the season. Another problem GSW had was the inability to get the big hit with runners on base. With the exception of the bottom of the sixth inning, this was a reoccurring problem for the Hurricanes in this game 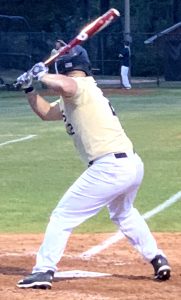 GSW designated hitter Andy Moore went 1-for-3 at the plate with an RBI single against Middle Georgia State.
Photo by Ken Gustafson

Offensively for the Hurricanes, they were led by Skelton and Wilks. Both hitters went 2-for-4 at the plate. Skelton scored a run and Wilks drove in an RBI.

Of the numerous pitchers used by GSW, reliever Morgan Bell had the best performance. Bell pitched two innings and allowed two runs on two hits. He walked two and struck out five.

GSW will try to rebound from this latest setback when they step back into Peach Belt Conference play this weekend. They will travel to Columbus, GA to take on Columbus State in a three-game series. The first game will be on Friday, April 5, at 5 p.m. There will be a doubleheader on Saturday, April 6, with the first game starting at 1 p.m. Game 2 of the doubleheader is scheduled to begin at 4 p.m.