Ovando’s goal not enough for Panthers against Crisp County 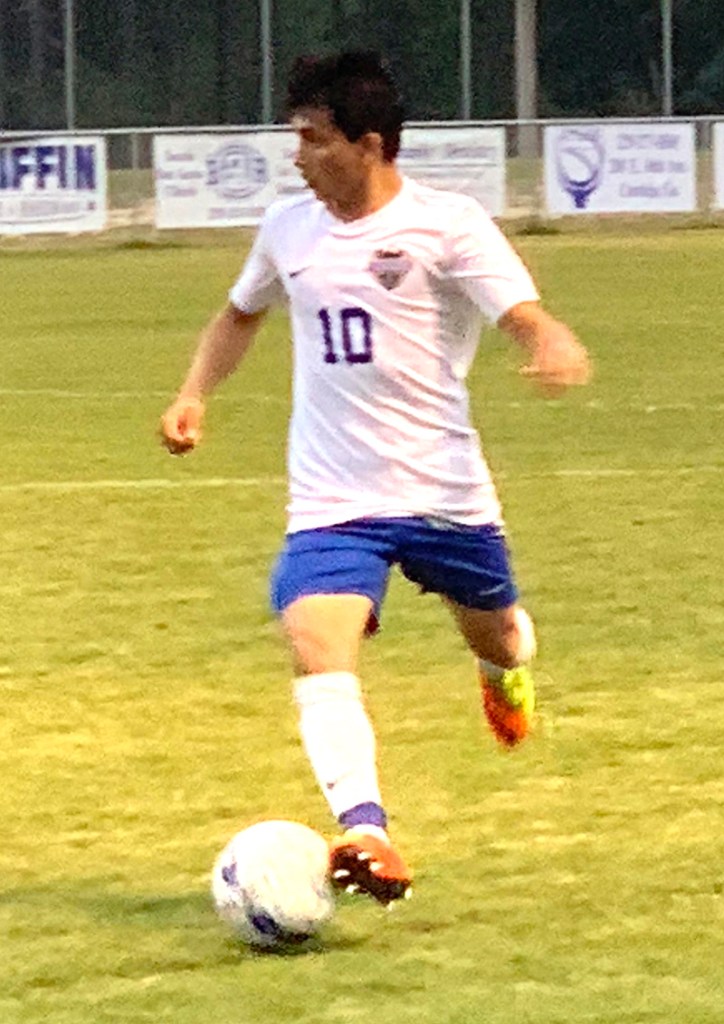 Americus-Sumter midfielder David Ovando with the ball. Ovando converted a penalty kick late in the game, but the Panthers fell to the Cougars 2-1. Photo by Ken Gustafson

CORDELE – Coming off a 5-0 Region 1-AAAA win over Carver on Thursday, April 4, the Americus-Sumter boys’ soccer team was ready to continue their winning ways as they traveled across Lake Blackshear to take on the Cougars of Crisp County (CC) on Friday, April 5, at Crisp County High School. In the closing minutes of the game, ASHS midfielder David Ovando dribbled into the 18-yard box and was fouled, earning a penalty kick for the Panthers. Ovando converted the penalty kick, but it would not be enough as the Cougars came away with a 2-1 victory. 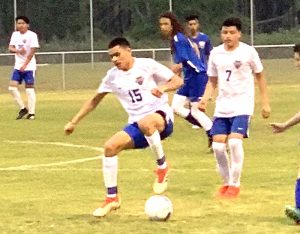 Americus-Sumter’s Jessie Rodriguez trying to advance the ball up the field. Rodriguez was in the field during the first half, but played goalkeeper in the second half.
Photo by Ken Gustafson

It was an extremely hard-fought match between both teams from start to finish. Both teams had chances to score. In the first half, ASHS forward Montavious Nedd drove the ball towards goal and was one-v-one with CC goalkeeper Griffin Musslewhite. However, before Nedd could get a shot off, Musslewhite was able to knock the ball away via a slide tackle. The Panthers continued to try to score by moving the ball up the left flank and crossing it into the box so an on-coming runner could get to it and get a shot on goal. However, the Cougars’ back line was up to the task in stopping the Panthers’ attack. The Panthers were flagged for being offside on more than one occasion as well.

Through much of the first half, CC had numerous chances to score, but the ASHS defense was able to keep the Cougars off the scoreboard. By halftime, the score remained 0-0. 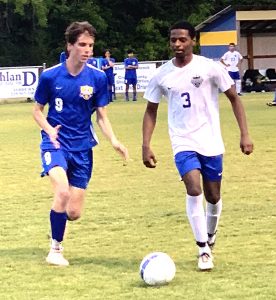 Americus-Sumter forward Montavious Nedd with the ball against a Crisp County defender.
Photo by Ken Gustafson

In the second half, CC broke the deadlock when Elijah Reynolds took a shot that was blocked by ASHS goalkeeper Jessie Rodriguez, but Jordan Fawkes was there for the rebound and scored to give the Cougars a 1-0 lead. A few minutes later, the Cougars added to their lead when CJ Daniels took a shot that went right underneath a diving Rodriguez and into the net.

With about three minutes left in the match, Ovando drove into the box to try to score and was fouled by a CC defender. The referee awarded the Panthers a penalty kick. Ovando stepped up and converted the spot kick, but it was too little, too late for ASHS as the Cougars went on to win 2-1. 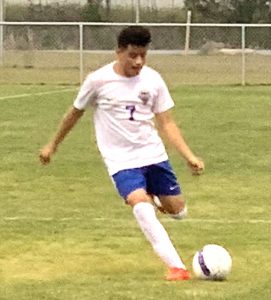 Americus-Sumter forward Victors Rodriguez with the ball for the Panthers.
Photo by Ken Gustafson

The Panthers will finish up the regular season on Monday, April 15, when they travel down to Bainbridge to take on the Bearcats. Kickoff is scheduled for 5:30 p.m.