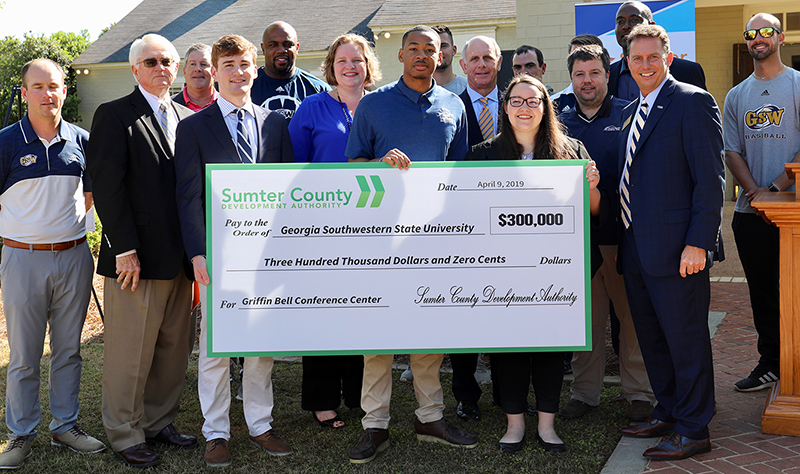 AMERICUS — On Wednesday, Georgia Southwestern State University President Neal Weaver announced plans for the future of the Griffin Bell Golf and Conference Center, and accepted a generous gift from the Sumter County Development Authority (SCDA) for the project.
Weaver told a gathering of local leaders about the legacy of the late Griffin Bell. “He was a man who achieved incredible things in his life. He served our country at the highest levels, and we are fortunate at the university to have a facility that honors him and recognizes him.” Weaver also mentioned that GSW has had the privilege of hosting the Griffin Bell Lecture Series, bringing “incredible people to our campus and to this community.”
Weaver said that as GSW president, when he first saw the conference center. He didn’t think it “lived up to the man that we’re honoring.” He said discussions began on what the building was and what it could be and “how this building could, not just honor Judge Bell, but it can honor him in a way that represents the way he served this community, by bringing us together socially, bringing us together in pursuit of economic advancement of this community and our region, and bringing us together to live together and work together and enjoy one another.”
Weaver explained that the purpose of the new conference center will be to enhance the golf course and as a community resource. “One that is used by people across the spectrum of our community,” he said, adding that it will be used not only for social events such as weddings and class reunions, etc., but for community-wide celebrations such as Chamber banquets, Books for Sumter events and such.
“It should also be a building that has an academic function,” he said. “as a part of the university, we need to be engaged academically here and … in the economic development of the community. … Those are the things we hope to accomplish.”
Americus Mayor Barry Blount, in brief comments, recalled the building as the former Americus Country Club, built in 1946. He also said research shows that every 2.5 students enrolled in a college or university creates one job. “My hope is that this facility, once it’s renovated and restored and repurposed, will help to increase the student enrollment at Georgia Southwestern State University … If you increase enrollment by 1,000 students, that’s 300 jobs.”
Weaver pointed out the architectural drawings of the new conference center, and that two separate architects have been hired to advise on what the center could be. He said both had advised that a renovation would cost from 20 to 30 percent more than razing it and rebuilding it. One of the approaches is very modern and the other “respectful of the current and original design of this building.” But, he said, “In both cases, the footprint is the same as exists today.”
Weaver disclosed some of the interior plans such as a grill/bar area for use by golfers, a ballroom that holds seated events for up to 400 people, a terrace in the rear, a co-working space for business incubation and entrepreneurial activity that will bring GSW students and faculty together with community leaders and mentors, as well as professionals who want to serve the local community.
Weaver introduced Paul Hall, chairman of the Sumter County Development Authority. Hall commented on how important the partnership is between GSW and the development authority for economic development of the community and region. He cited several local entrepreneurs who had launched successful businesses such as Larry Comer (Metalux), Georgia Eusner (Mullite), and the two sisters, Eshonda Blue and Jessica Wright, who founded Innovative Senior Solutions.
Hall announced an investment of $300,000 to GSW for the new conference center. “In return for the support, the authority will have endless future access to the facility to host meetings, community sessions, and any activity which promotes economic development. This center provides a unique option to work towards development that is highly needed in our community and region.”
Barbara Grogan, executive director of the SCDA, said, “As a community partner, we are proud to be a supporter of this community and workforce development initiative. Entrepreneurs are a vital part of any community’s workforce. To grow the ideas into reality, we must have a space for creativity and strategic planning.”
Grogan said the SCDA approved the funding because similar to the SCDA’s past investments in the South Georgia Technical College Foundation and the Ignite College and Career Academy, this project will ensure workforce development opportunities of all types are available and thriving in the community to ensure the community’s future prosperity.
According to GSW’s Weaver, “Getting this strong commitment from our local development authority will only further assist us in reaching our goal of $3.2 million to make sure our students and the entire region has the proper facilities for community events. In addition, because the conference center has a concentrated workspace to help incubate area entrepreneurial efforts, we will see community collaboration daily at this beautiful new hub combining live, work and play. We are most grateful for the Sumter County Development Authority’s support.”