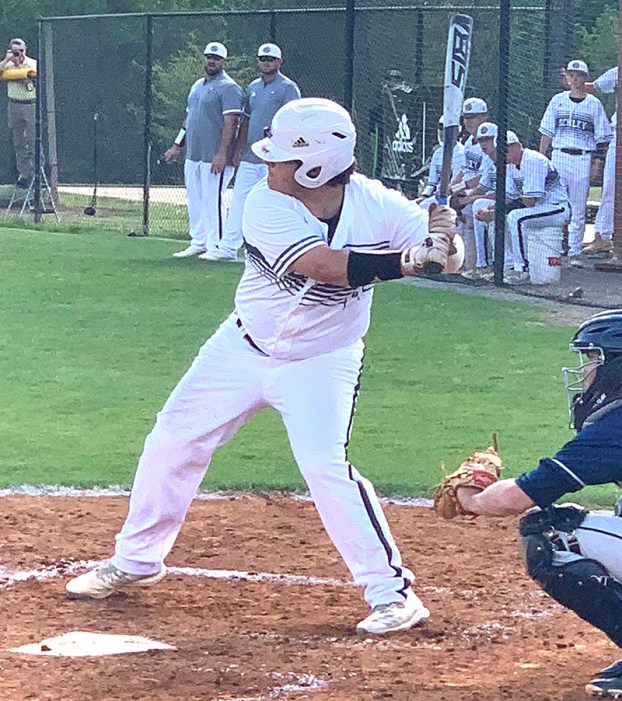 Schley County’s Dylan Windham at the plate for the Wildcats in a previous game. Windham was one of only three SC players to get a hit in Monday’s 7-4 loss to Westfield. ATR Archive

ELLAVILLE – For the first three innings of the game, it was a scoreless affair between Schley County and Westfield. However, the Hornets scored two runs in the top of the fourth inning and four in the fifth on their way to pulling off a 7-4 upset win over the Wildcats in SC’s regular-season finale on Monday, April 15, at Schley County High School.

Up until Monday’s loss to the Hornets, the Wildcats (20-2) had won eight-straight games.

Trailing 6-0 in the bottom of the sixth with two outs, the Wildcats were able to score three runs to cut their deficit. They did this by taking advantage of two errors and a walk by the Hornets. With two runners on base, Dylan Windham doubled to center field, scoring Dakota Albritton and Dylan Taylor and bringing the Wildcats to within three.

The Hornets added an insurance run in the top of the seventh, but the Wildcats still had a chance for a come-from behind victory as they batted in the bottom half of the inning.

Things started off well for SC as Ashton Goodin singled to lead off the inning. However, Lorne Barineau struck out and Trypp Lumpkin grounded out to first, putting the Wildcats within one out of their first defeat in over a month. Wurtz kept hope alive for SC by drawing a walk. Peavy then singled, scoring Goodin and bringing the Wildcats to within three at 7-4. However, Albritton grounded out to second base to end the game.

The Wildcats struggled against solid pitching by the Hornets. Peavy, Windham and Goodin were the only Wildcats to earn hits in the game.

Trent Bivins started on the mound for the Wildcats. He pitched three innings and gave up no runs or hits. He walked three and struck out five. Michael Wainwright came on in relief of Bivins. He gave up five runs on three hits and walked two batters.

By Ken Gustafson   AMERICUS – The Southland Academy Raider baseball team scored five runs in the bottom of the... read more