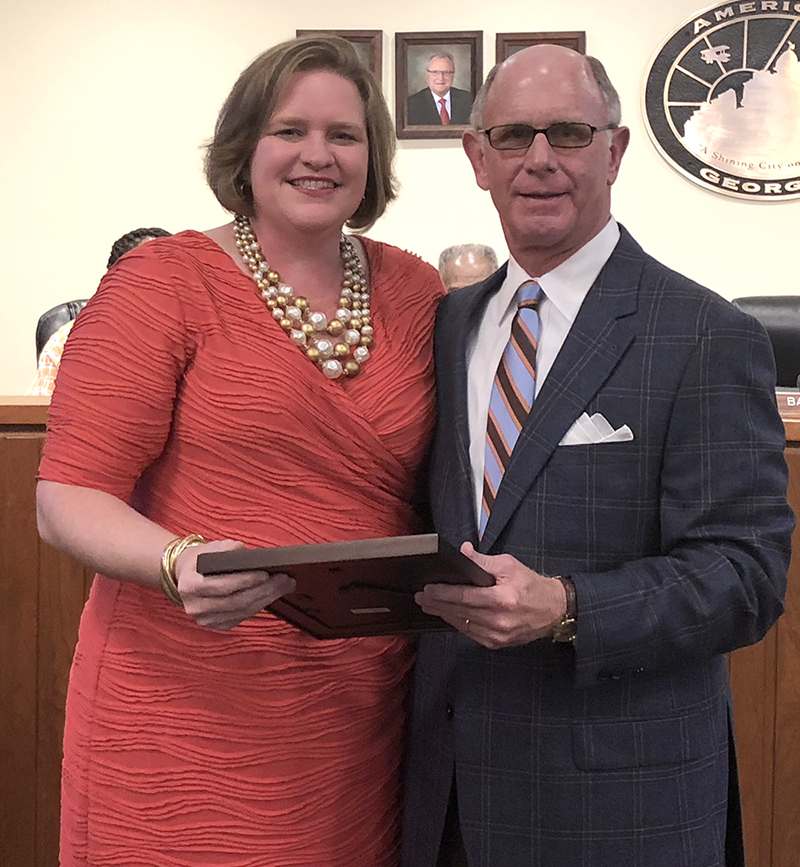 Barbara Grogan accepts a proclamation from Americus Mayor Barry Blount at Thursday’s city council meeting in recognition of her 10 years of service to the community. She is leaving to take a position in Moultrie.

AMERICUS — The monthly meeting of the Americus Mayor and City Council on Thursday was a time of recognition, as well as action.
The Rev. David Stone, an ordained minister as well as a city employee, gave the invocation at the beginning of the meeting. Council member Nelson Brown’s Honorary Council Member for April, Roger Jackson, was recognized and presented with a proclamation by Mayor Barry Blount. The mayor administered the oath of office to Patricia Harris who was recently appointed to serve in the Theater and Cultural Authority.
Barbara Grogan, executive director of the Sumter County Development Authority, was also presented with a proclamation from the mayor recognizing her for 10 years of service in the community, first as the Archway professional, and later for leadership roles with the Chamber of Commerce, Americus-Sumter County Payroll Development Authority, and her current position. Grogan, in accepting the recognition, commented on how much she has enjoyed her time here and that she always felt welcome, and enjoyed working with everyone in a spirit of cooperation. Grogan is leaving to accept a new position with the Moultrie Colquitt County Development Authority. She is native of that area.
Blount also read a proclamation in recognition of April as Child Abuse Prevention Month. Following the council meeting, blue balloons were released from the courtyard of the Russell Thomas Jr. Public Safety Building in recognition of child abuse prevention. (Watch it at https://www.facebook.com/Americus-Times-Recorder-129884770363190/ )
Blount read a proclamation in recognition of April as National Volunteer Appreciation Month. He asked that anyone in the audience who had volunteered at any city event in the past year come forward. About a dozen did.
Blount also proclaimed the week of April 21-27 as Georgia Cities Week. Americus City Clerk Paula Martin announced three activities planned for next week:
• Tuesday — Council member Lou Chase will read to students at Georgia Southwestern State University Early Childhood Development Center.
• Wednesday — Customer Service Appreciation Day 11 a.m.-1 p.m. at the City of Americus Customer Service Center, 1401 E. Forsyth Street. The public is invited to free enjoy a free hotdog, chips and soft drink in celebration.
• Thursday — “Touch the City Equipment” Event, 2-4 p.m. at Joyce Myers Park, 701 E. Church St. The public is invited to enjoy free ice cream.
On the consent agenda for Thursday’s monthly meeting was the approval of the purchase of a new communication repeater for Americus Fire & Emergency Services for $6,925.
The council also took the following action Thursday.
• Unanimously approved the second and final reading of the request to annex property at 1219 S. Martin Luther King Jr. Blvd., where Dialysis Clinics of Americus will construct a $2.4 million clinic.
• Unanimously approved an alcohol license application for the sale of beer, wine, and liquor on premises at Lounge 323, located at 323 W. Forsyth St., with Broderick Coley as applicant.
• Approved the appointment of Angela Allen to serve on the Americus-Sumter Tourism Council, replacing Jackie Bryce, whose term expired.
• Approved the appointment of Donovan Smalley to the Theater and Cultural Authority, replacing Leila Case, whose term expired.
• Approved the reappointment of Oneida Ingram to the Historic Preservation Commission.
• Approved the reappointment of Charles Crisp to the Historic Preservation Commission.
• Approved the reappointment of Cecil Horne to the Walk of Fame Committee.
• Approved the reappointment of Marvin Harris to the Walk of Fame Committee.