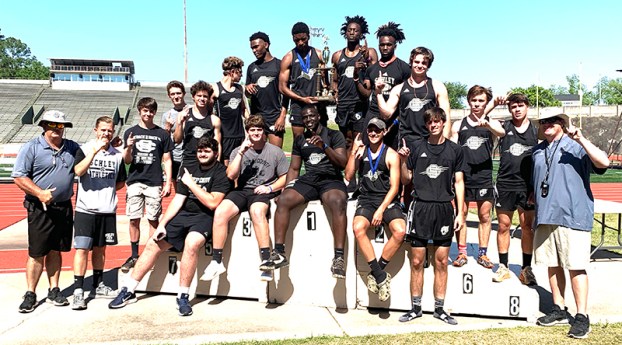 ALBANY – It was an outstanding day for both the Schley County boys and girls’ track and field teams. The Wildcats won the GHSA Area 1-1A Public Meet for the third year in a row, while the Lady Wildcats finished as area runners-up. The meet was held on Monday, April 22, at Hugh Mills Stadium in Albany.

“This is a big area. We are in the biggest area in the state There are 25 teams in our area,” SC boys’ coach Scott Burgess said. “We were able to have a lot of guys place in the top four, which advances us to state. We’re going to have a shot at winning state. We’ll see what happens.” 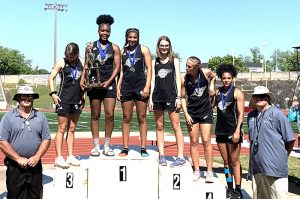 The Schley County girls’ track and field team finished as area runners-up at the Area 1-1A Public Meet on Monday, April 22, at Hugh Mills Stadium in Albany.
Photo by Ken Gustafson

Jackson Fulks took home the top prize in several events. Fulks won the boys’ long jump competition by jumping a length of 22-04.00 (22 feet, four inches). Fulks jumped well over a foot farther than second place finisher Jessie Davis of Marion County. Davis’s best jump was 21-00.00. Fulks also won the boys triple jump competition by jumping a length of 44-11.50, which was over a foot farther then Davis’s best jump of 43-08.25. Davis finished second behind Fulks in this event as well. Even though Fulks was happy with the results in the triple jump, he believes he can do even better. “I need to bring more speed and have better focus in getting my legs extended in the jump,” Fulks said. In addition to winning the long jump and triple jump events, Fulks also won the boys 200-Meter Dash. “I really wasn’t feeling it before the race, but once I got in there, it went good,” he said. 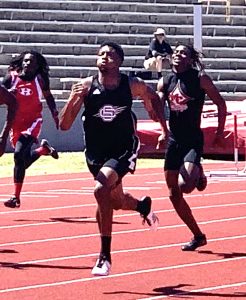 Schley County’s Jackson Fulks won the long jump, triple jump and the 200-Meter Dash to lead the Wildcats to their third straight Area 1-1A Championship in Boys’ Track & Field.
Photo by Ken Gustafson

In the Boys’ 3200-Meter race, the Wildcats finished in first and second place. David Williams won the event in a time of 11:12.61 and Aaron Pinckard finished right behind Williams with a time of 11:13.86. However, there was controversy involving the last lap of the race. According to Burgess, an official rang the bell signaling the last lap on the seventh lap of the race instead of the eighth. As a result, the Boys’ 3200-Meter Run will have to be run again. It will be run on Wednesday, April 24, at 6 p.m. at Hugh Mills Stadium. 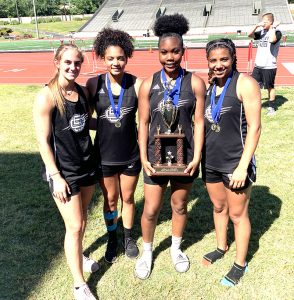 In the Boys’ Discus competition, Zykevious Walker, known for his exploits on the football field, finished in third place and earned himself a spot in the state meet in that event. Walker’s best throw was for a length of 119-05.50. In the Boys’ 1600-Meter Run, Aaron Pinckard finished in second place with a time of 5:12.73, a little over two seconds behind first place finisher Trevez Howard of Central Talbotton (5:10.17). In the area meet, the top four finishers in each event advance to the GHSA Class A-Public State Meet. 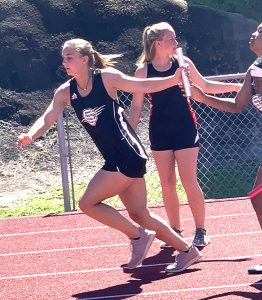 Dasani Minter passes the baton to Perri DeVane during the Girls’ 4×400-Meter Relay at the Area 1-1A Meet. Schley County finished in third place in that event.
Photo by Ken Gustafson

In the Boys’ 110-Meter Hurdles, SC’s Landon Dailey finished in third place with a time of 16.61. Dailey also had a strong finish in the Boys’ Pole Vault event as he finished in second place. His best vault was for a height of 10-06.00 (10 feet, six inches).

The Wildcats continued to rack up points in their run to an area championship. Noah Hammons won the Boys’ 800-Meter Run with a time of 2:11.94. “I run each event differently depending on how the race feels,” Hammons said. “I got out really quick and I ran my first lap in a minute, but you want to run two even times. The first lap, I ran in a minute. In the second lap, I ran that in 1:10, which wasn’t very smart strategy. If I would have slowed up on the first lap, I probably would have had a better time, but I’m still happy with the win.” 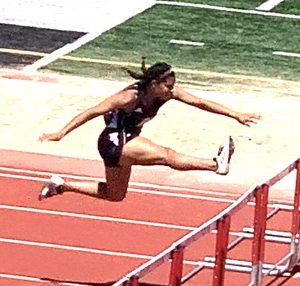 SC’s Nyiah Kelley competing in the Girls’ 100-Meter hurdles. Kelley won the event in a time of 17.01.
Photo by Ken Gustafson

Hammons’ teammate, Tucker Welch, finished third in the event with a time of 2:15.25. Hammons was a member of the SC Boys’ 4×400-Meter Relay Team that finished in third place in the event with a time of 3:40.40. The Macon County team barely beat them out for second place, finishing with a time of 3:40.30. “Everybody just needed to run their best 400,” Hammons said. “Jackson (Fulks) was a little hurt in the last meet, but he came out today and got a good time, which is all we really needed. We’re moving on to state.” 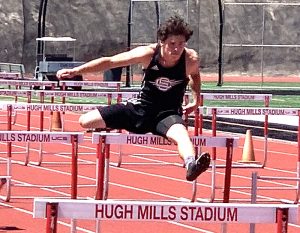 Schley County’s Landon Dailey competes in the Boys’ 110-Meter Hurdles event. Dailey finished in third place in that event and finished in second in the Boys’ Pole Vault.
Photo by Ken Gustafson

The Lady Wildcats came close to winning the Area 1-1A Public Meet Championship, but fell short to the Lady Eagles of Marion County. However, several SC athletes finished in the top four of their events and will advance to the state meet. 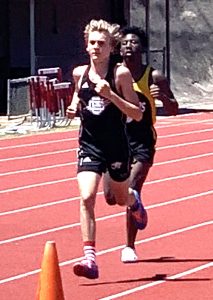 Schley County’s David Williams won the Boys’ 3200-Meter Run, but the result was nullified because of a discrepancy. The race will be run again on Wednesday, April 24, at 6 p.m.
Photo by Ken Gustafson

In the Girls’ 100-Meter Hurdles, Nyiah Kelley won the event for SC with a time of 17.01. Her sister, Tamia Kelley, finished in second place in the Girls’ 100-Meter Dash with a time of 12.94. In the Girls’ Long Jump event, Dasani Minter brought home an individual title for SC by jumping a length of 16-08.00, four inches better than second place finisher Kniyah Watson of Terrell County (16-04.00). Minter almost won the Girls’ 400-Meter Dash, but finished in second place with a time of 1:02.05. “It was a good meet. The girls put forth great effort,” SC girls’ coach Jim McFather said. “It’s going to be tough at state because you have preliminaries. That means you run and then come back and run again. We are just going to have to bow up and make it happen. I was really proud of my girls.” 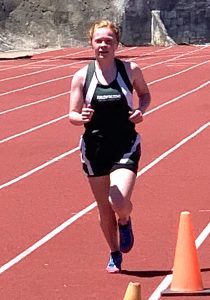 While the SC girls finished in second as a team, they weren’t the only area representatives that turned in an outstanding performance. Furlow Charter (FC) only had one athlete competing in the meet, but that athlete dominated the Girls’ 1600-Meter Run. FC’s Maya Wynn took control of the race early and never looked back. She dominated the field, winning the event in a time of 6:21.49. The runner-up in the event was SC’s Grace Hardage. Hardage finished in a time of 6:36.60. When asked how she is able to run as well as she does, Wynn simply said that she stays relaxed, runs with the proper form and uses correct breathing techniques. “My strategy in this race was to focus on my form, my breathing and staying calm,” Wynn said. 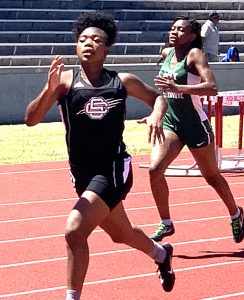 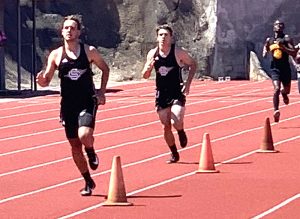 Schley County’s Noah Hammons is about to capture the Boys’ 800-Meter run. His teammate, Tucker Welch, is right behind him. Welch finished in third in the event.
Photo by Ken Gustafson

In the Girls’ Discus event, Rene Rix of SC barely missed qualifying for state in the event. Rix finished in fifth place, with her best throw being 90-06.50. Fourth place finisher Aleena Fuller of Pelham threw the discus three feet farther (93-06.50).

The SC 4×400-Meter Relay Team made up of Perri DeVane, Tamia Kelley, Dasani Minter and Nyiah Kelley finished the event in third place. 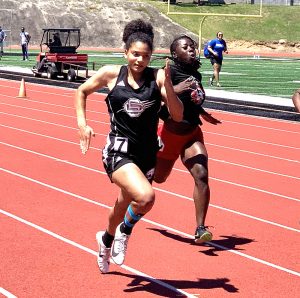 SC’s Tamia Kelley finished in second place in the Girls’ 100-Meter Dash with a time of 12.94.
Photo by Ken Gustafson

Both the Wildcats and Lady Wildcats will be back at Hugh Mills Stadium for the GHSA Class A-Public State Meet, which will take place Thursday through Saturday, May 9-11.