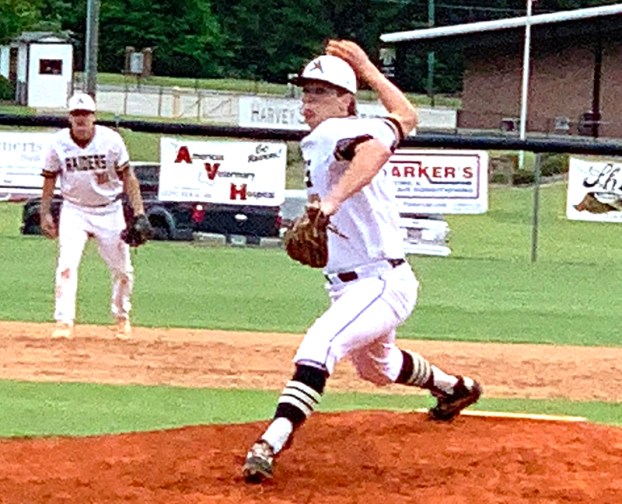 Southland Academy pitcher Chase Ledger seen here pitching in a previous game. Ledger struck out the side against Westfield to preserve the 5-4 victory for the Raiders. Photo by Ken Gustafson

PERRY – The Southland Academy Raider baseball team ended their regular season on a high note by defeating Westfield 5-4 on Wednesday, April 24, at the Westfield School.

Going into the top of the sixth inning, the score was tied 4-4, but the Raiders were able to get the go-ahead run and held on to win. With one out in the top of the sixth, Tyler Kennedy singled to centerfield. George Wall hit into a fielder’s choice, but Kennedy was able to advance to second on the play. With two outs, Luke Law reached on an error, which allowed Kennedy to score from second.

Southland relief pitcher Chase Ledger struck out the side in the bottom of the seventh to secure the victory for the Raiders.

Kennedy had the best day offensively for SA. He went 2-for-4 at the plate and scored two runs. Adam Smith started the game on the mound for the Raiders. Smith pitched two innings and allowed one run on three hits. He walked one batter and struck out two.

Luke Law came on in relief of Smith and ended up getting the win. Law gave up three runs on four hits and struck out two batters over three innings of work.

With the regular season behind them, the Raiders will now focus on the GISA Class AAA State Playoffs. They will travel to Newnan, GA to take on Heritage in the first round of the playoffs on Monday, April 29. First pitch for Game 1 is scheduled for 4:30 p.m. Game 2 on Tuesday, April 30, is scheduled for 2 p.m. If necessary, Game 3 will follow right after Game 2 at 4:30 p.m. on Tuesday.