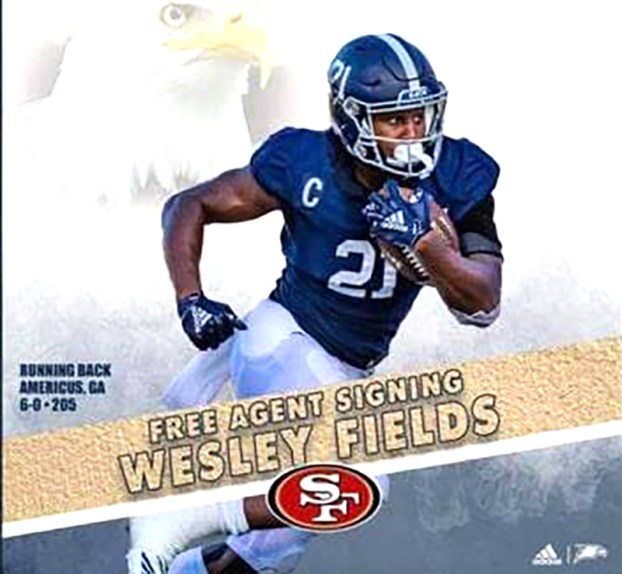 Georgia Southern running back and Americus native Wesley Fields has been invited by the San Francisco 49ers to attend their rookie minicamp as a rookie free agent. Photo by GA. Southern football twitter page

STATESBORO, GA – Georgia Southern senior running back and former Americus-Sumter football standout Wesley Fields signed as a rookie free agent with the San Francisco 49ers. Fields was not drafted in the recent 2019 NFL Draft, but has been invited by the club to attend a rookie minicamp.

There have been instances in which players who were not drafted ended up making an NFL roster. Former GA. Southern running back Matt Breida and former Colorado running back Phillip Lindsay were both undrafted rookie free agents, but are both currently playing in the NFL. Breida is with the 49ers. Lindsay made the roster of the Denver Broncos and became the first undrafted offensive rookie in NFL history to be voted to the Pro Bowl.

According to the university’s athletic website, www.gseagles.com. Fields became the first player in Georgia Southern history to lead the team in both rushing and receiving yards in the same season. The Americus native was a second-team All-Sun Belt Conference selection. During the 2018 season, Fields rushed for 1,050 yards on 250 carries and scored nine rushing touchdowns. He also caught 10 passes for 237 yards and had one touchdown reception.

During his high school career at Americus-Sumter, Fields ran for a total of 3,781 yards and scored 35 rushing touchdowns. Fields also played quarterback for the Panthers. During his senior year, he completed 38 of 67 pass attempts for 452 yards and three touchdowns. Fields was named Region 1-AAAA Offensive Player of the Year and was a three-time All-Region 1-AAAA selection. In addition to being a standout football player at ASHS, Fields also lettered in basketball and track.

Fields will graduate from GA. Southern this spring with a degree in Sports Management.

Southland Academy sweeps Heritage in first round of state playoffs