Southland Academy sweeps Heritage in first round of state playoffs 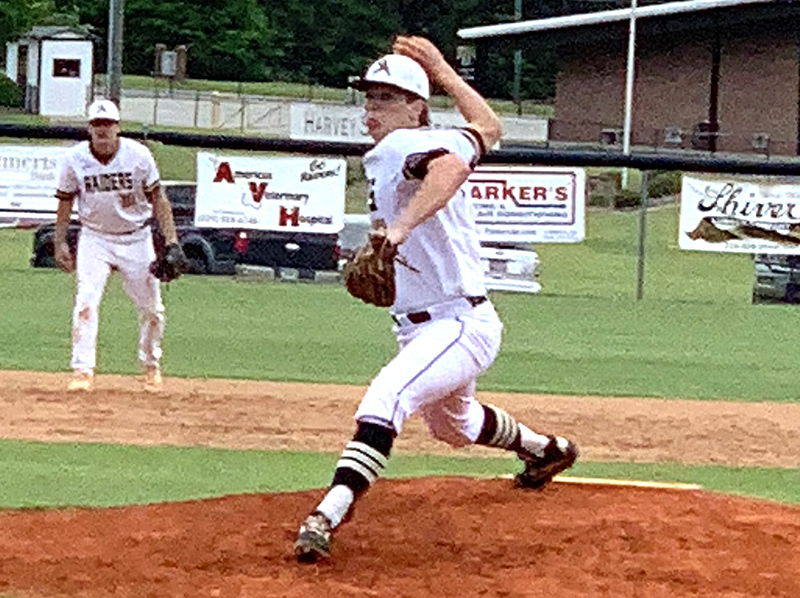 Southland Academy eighth grader Chase Ledger led the Raiders both on the mound and at the plate in Game 2 of their first-round series against the Heritage School. Photo by Ken Gustafson

NEWNAN, GA – The Southland Academy (SA) Baseball Team went up to Newnan, GA and won two-straight games over the Heritage School (HS) to sweep their first- round playoff series in the GISA Class AAA State Playoffs. The Raiders won Game 1 in a 10-2 blow out. In Game 2, eighth grader Chase Ledger led the way both on the mound and at the plate to guide the Raiders to a 4-1 victory.

In Game 1, both teams were tied at 1-1 going into the top of the fourth inning. That’s when the Raiders began their offensive onslaught. Owen Exley led off the inning with a single and stole second base. Nathan Duke then reached first base on a dropped third strike. With runners at first and second, Freddie Updike reached on an error by the HS second baseman. Exley scored on the play to give the Raiders the lead. It would be a lead that SA would not relinquish.

After Tyler Kennedy grounded out for the first out of the inning, George Wall belted an RBI single into center field, scoring Duke from third to give SA a 3-1 lead. After Wall stole second, Updike scored on an error by the Hawks’ catcher. At this point, the Raiders led 4-1.

SA added one run in the fifth, three in the sixth and two in the seventh to secure the 10-2 victory over the Hawks. The Raiders took advantage of five errors committed by HS. SA scored 10 runs on nine hits and committed no errors, while the Hawks scored two runs on six hits.

Hunter McCain went the distance for SA on the mound. McCain gave up two runs on six hits. He walked five and struck out three.

David White took the loss for the Hawks in Game 1. White surrendered four runs on four hits over four innings. He walked three SA batters and struck out four.

In Game 2, Chase Ledger took control on the mound for the Raiders and was also productive at the plate in SA’s 4-1 win. Ledger went the entire game, giving up one run on four hits. He walked three and struck out seven HS batters. The Raiders were the home team in Game 2. In the bottom of the sixth inning, Ledger belted a two-run home run over the left field fence to give the Raiders a 4-1 lead. That was the insurance SA needed. Ledger retired all three HS batters in order in the top of the seventh to give the Raiders the 4-1 win and the series sweep.