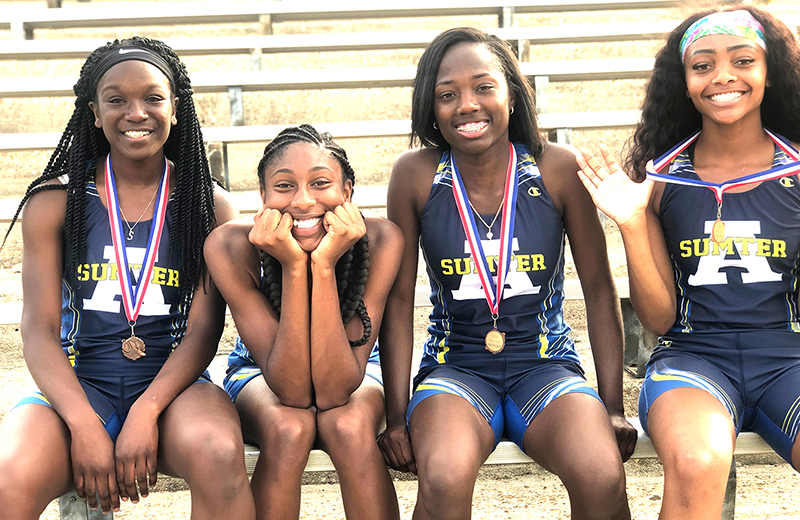 From left to right: The Americus-Sumter Girls’ 4x100 Meter Relay Team of Selliyah Owens, Adrienne Douglas, Ayesha Williams and Jamaya Young finished in eighth place at the GHSA track and field sectionals. That was good enough for them to qualify for the state meet in that event. Submitted Photo

The meet was held at Kinnett Stadium on the campus of Shaw High School.

The meet consisted of Class AAAA schools in regions 1, 2, 5 and 6. Americus-Sumter is in Region 1. Several ASHS male and female athletes qualified for the state meet, which will take place Thursday through Saturday, May 10-12, at Hugh Mills Stadium in Albany.

In the Boys’ 4×400 Meter Relay event, The ASHS team of Trevian Thomas, Rondravious Terry, Jaylen Mable and Braylon Green finished in fourth place and qualified for state in that event. They did it in a time of 3:24.35.

In the Boys’ Long Jump event, Thomas finished in eighth place, jumping a distance of 20-08.00 and qualifying for state. Thomas also finished strong in the Boys’ Triple Jump event, finishing in seventh place with a distance jump of 42-01.00. 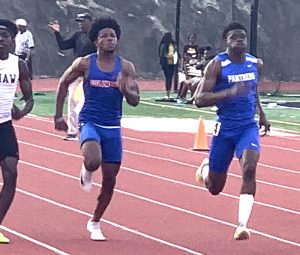 On the girls’ side, Selliyah Owens finished in third place in the High Jump. Owens jumped a distance of 5-00.00 to secure her spot in the state meet. She also broke an ASHS school record in that event. “This is her first year of jumping and she’s only a sophomore,” ASHS girls head coach Shanika Dyson said. “I’m very proud of Selliyah. She worked hard this season to get where she is. That’s what I like about her and all my girls.”

The ASHS 4×100 Meter Relay Team of Owens, Adrienne Douglas, Ayesha Williams and Jamaya Young finished in eighth place with a time of 50.26. They were not far off the time of the Shaw relay team. Shaw finished in fourth place with a time of 48.63. “The relay team faired ok. We haven’t surpassed our fastest time this season (50.09), which is the school record,” Dyson said. “We had to fight for that spot and I just know we are going to have to fight for that spot in the finals on Thursday. I know our girls have a lot more to give and it’s going to have to come out soon.”

Dyson went on to say that there was a discrepancy in the Girls’ 400 Meter Dash, which caused the event to have to be done again. “It caused Selliyah (Owens) not to be able to qualify for state in that event,” Dyson said. “We already agreed that next year, we won’t let an obstacle like that stop her again. Overall, I’m excited about everyone’s success, both boys and girls. I can’t wait to see what the upcoming week brings.”

ASHS boys head coach Ryan McKenzie was equally pleased with the performance of his team. “We are proud of our efforts that were displayed last Saturday,” McKenzie said. “We finished with some strong performances and we know that we have much work to do in order to achieve our ultimate goal of being state champions. We have prepared all year for this moment and we expect to compete in every event we have qualified in. We appreciate all the support this year and we look to end the season on a great note.”