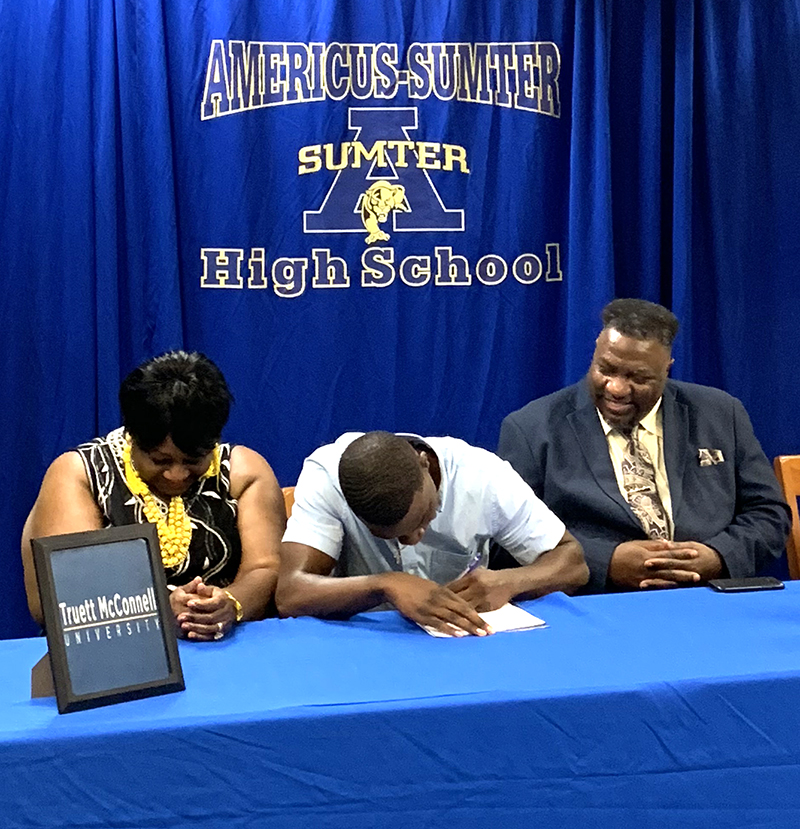 AMERICUS – On Monday, May 6, Henry Wilson, a football player and wrestler at Americus-Sumter High School (ASHS), became the first Panther in ASHS history to sign an athletic scholarship to compete in the sport of wrestling.

The signing took place in front of his classmates, coaches and family members in the media center on the ASHS campus.

“First of all, I want to thank the Lord above,” Wilson said. “If you had told me a few months ago that I would be signing this paper, I wouldn’t have believed you. I’ve gone through a lot in my high school years. Wrestling has been a sport that has been keeping me together. I’m so glad that God gave me this opportunity to sign this because I had talked with my mom at one time before she passed away. I told her that I was going to do it. I told her that I was going to either get a scholarship in wrestling or football. She said, ‘You don’t have any money to pay for college. The only way you’re going to go to college is a scholarship’. I told her that I was going to do it. I’m so glad that I’m signing this paper knowing that she is looking over me. I never though that I’d be signing this paper.” Wilson went on to thank all of the people in his support group: his family, classmates, teachers and coaches. 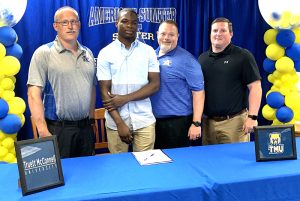 For Wilson, it came down to either Brewton-Parker or Truett McConnell, but in the end, he chose to head to the North Georgia Mountains and compete for the Bears.

“When I was at TMC, there was never a dull moment during the tour,” Wilson said. “The coaches were great. The team members were great. We sat, talked and laughed for most of the time. The food was great too. The dorms were nice. Everything about it was great. It felt like home when I was there. That’s why I made my decision to go there.”

ASHS head wrestling coach Mark Prater told the crowd assembled for the signing that he is proud of Wilson and that he has worked hard to get to this point. “He used to be a chubby kid, but he’s nowhere chubby now,” Prater said. “As we were walking around the campus at Truett McConnell, the only thing that he was reflecting back to was that he never thought that when he started wrestling in Middle School that he would ever get a chance to go to college to continue his education and do something that he likes to do. I’m proud of him.”

Wilson began wrestling in Middle School for former Sumter County Middle School wrestling coach Josh Hicks. However, Hicks credits Wilson’s development more to the tutelage of Prater. “Coach Prater had a lot more to do with this than me,” Hicks said. “Just to show you a testament to not only Henry, but Coach Prater, Coach Rechtorovic and all these guys. If I’m not mistaken, I believe this is the first Americus-Sumter guy to sign a college scholarship for wrestling.”

Wilson told the Americus Times-Recorder that his potential to be an outstanding wrestler really showed during his sophomore year. “I started getting better. I was practicing every single day to be the best I could be,” Wilson said. “During my junior and senior years, I made it to state.”

During his career as a wrestler at ASHS, Wilson won the individual region championship twice. He also qualified for the GHSA Class AAAA State Tournament and placed in state. Wilson placed in two major high school tournaments. He finished in third place at the Battle at the Rock two years in a row and finished in second place at the Last Man Standing Tournament. He placed sixth in the state during his junior year.

Wilson plans to major in Criminal Justice and minor in Psychology while in college. After his time at Truett McConnell, Wilson plans to either transfer to another college to play football or join the military.