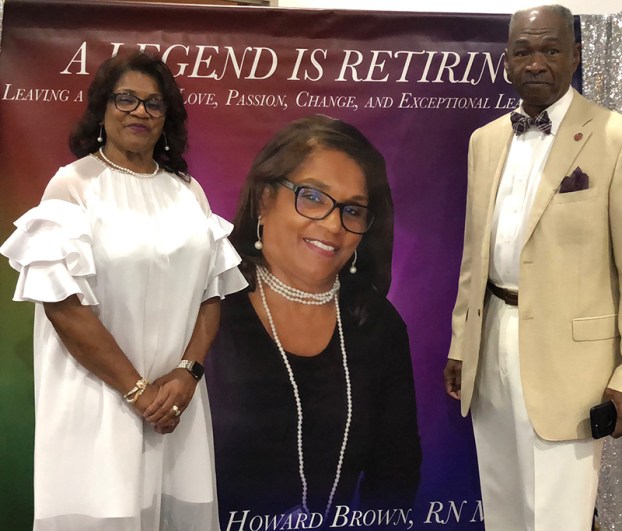 Luneda Brown and her husband Nelson Brown pose in front of the giant photo commemorating her retirement from the Sumter County Health Department after 34 years. The photo was taken recently during a retirement reception given in her honor at Union Tabernacle Baptist Church in Americus.

AMERICUS — Luneda Howard Brown has just retired after 34 years in public health. A large number of friends, family and colleagues gathered May 1 for a retirement reception at Union Tabernacle Baptist Church where she was the recipient of proclamations, awards and other recognition, and even had several songs sung for her.
Brown proudly acknowledges that she comes from humble beginnings. Born and raised in rural Randolph County, her childhood could be considered fairly average. She was brought up along with her six siblings — Gloria, Toledo, Carolyn, Vanetta, Larry, and Alvin — by her loving parents Johnny and Oneda Howard. While in her youth, she attended Henderson Elementary and High School. “I was chosen by the Randolph County NAACP {National Association for the Advancement of Colored People} to integrate the elementary school in 1968,” she explained. She graduated in the Class of 1975 from Randolph County Comprehensive High School. 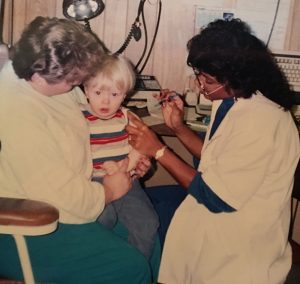 Luneda Brown, RN, talks with a young patient as she prepares. to administer a vaccination.

After graduating Georgia Southwestern College in the fall of 1984, Brown relocated in December of that year, and made Americus her permanent residence. She obtained an associate’s degree in nursing from Albany Junior College in 1981, a bachelor’s degree in nursing from Albany State University in 1986, and a master’s degree from Albany State University in 2000. She is the wife to Americus City Council member Nelson T. Brown. She is also the proud mother of three grown children: Raymarrius, Christopher, and Nelsondria Brown. She has touched many young lives, including her six grandchildren, one great-grandchild, and eight god children who all refer adoringly to her as “Nana.”
Brown is an active member of Union Tabernacle Baptist Church where she participates in the women’s ministry, mercy showing team, and serves as ministry leader for the youth ushers.
Brown is a charter member of the Rho Sigma Omega Chapter of Alpha Kappa Alpha Sorority Inc. where she has served dutifully and faithfully for 32 years. Her greatest asset is her ability to encourage, mobilize, and influence individuals because of her genuine passion for the well-being of people, she said. 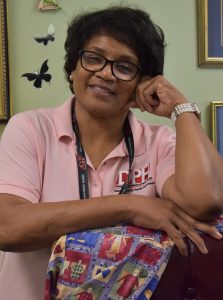 Luneda H, Brown, RN, in her office at the Sumter County Health Department.

Brown is a servant leader who leads by example. She is a veteran, professional registered nurse who holds more than 38 years of professional, clinical, and management experience. She has provided services in public health under the administration of six United States presidents, six Georgia governors, and four District Health directors. Currently, she serves as County Nurse Manager for the Sumter County Health Department. Prior to public health she was employed in the Phoebe Putney Memorial Hospital’s surgical intensive care unit in Albany.
Over her many years of serving at the public health department, Brown says that she and her co-workers have learned the meaning of “thriving on chaos.” She decided that the greatest change she has seen so far is, “moving away from the free public health services system because of the implemented billing for Medicaid services.” She has also noticed, “a decrease in the teen pregnancy rates, high-risk birth rates, and infant mortality rates in Sumter County.” Brown says, “The health department’s main focus and ongoing goal is to see a healthier generation of Sumter County residents and the citizens of Georgia.”
In May 2016, Brown was nominated for the Public Health Nurse Excellence in Public Health Award. She humbly received her 30 years of Faithful Service Award from the state of Georgia in August 2016. Being nominated and receiving these awards were quite an accomplishment for Brown, especially after almost losing her life in a car accident.
Brown’s tragic car accident occurred in 1993. The crash took place while she was on the job. She and a co-worker were headed to a training workshop when hit by a large truck coming off of the highway in Randolph County. Brown was able to maneuver the vehicle in such a way that doctors believe may have saved her life. Her co-worker and passenger, Christine, called and informed the health department that they had been involved in an accident, while Brown was unconscious at the scene. They transferred Christine to a Cuthbert hospital, and Brown to Phoebe Putney Memorial in Albany due to her critical condition. However, Christine was later taken to Albany where she died of a stroke. It was a long, difficult road to recovery for Brown, but she was determined.
As many know, Luneda Brown possesses the talent to leave every human being whose path she crosses with a feeling of being loved and nurtured. She truly does spread joy everywhere she goes. These characteristics have made a profound impact on a large portion of not only health department patients and service recipients, but also many other Sumter County residents. Her ability to persevere through some of life’s most challenging situations can be inspiring to all. Her hard work and dedication are reflected all across Sumter County and beyond. May she enjoy her years of retirement for a job well done!

By Beth Alston AMERICUS — If you ever have the opportunity to dine in one of the cafeterias of the... read more