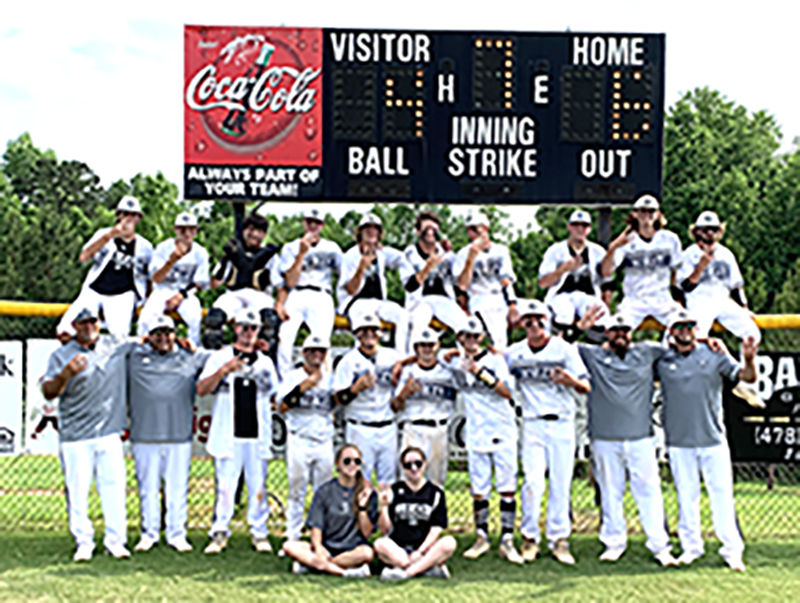 The Schley County HS baseball team poses for a team picture after their 6-4 victory over Commerce in Game 3 to take the series. Photo by Ken Gustafson

ELLAVILLE – When Schley County right fielder Ashton Goodin caught the final out of Game 3 against Commerce to secure the Wildcats’ victory in the rubber match of a best-of-three-game state playoff series, a burst of emotion and relief came from the SC dugout as they came on to the field to celebrate. The Wildcats outlasted the Commerce Tigers 6-4 to win the deciding Game 3 and punch their ticket to the GHSA Class A-Public State Semifinals on Thursday, May 9, at Schley County High School.

The two teams split the first two games of the series on Wednesday, May 8. The Wildcats won the first game by the score of 8-1. The Tigers returned the favor by blowing out SC 11-0 in Game 2. As a result, a decisive Game 3 was necessary.

“I was talking to Commerce Head Coach Steve Cotrell before the game. I told him that I though that after the last two games, the third one was going to be a nail biter,” SC Head Coach Chuck Cheek said. “It’s just how it goes. The first game really went our way and the second game really went their way. I just had one of those feelings that it was going to be one of those games that was just tight.” 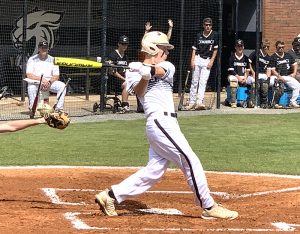 Schley County’s Dylan Taylor seen here belting the first of his two home runs in Game 1 to lead the Wildcats to an 8-1 victory.
Photo by Ken Gustafson

The Wildcats had a five-run lead going into the sixth inning, but the Tigers scored two runs in the sixth and one in the seventh. Trailing 6-4 with one out in the top of the seventh, the Tigers had the bases loaded and were poised for a multi-run rally to tie or take the lead. However, SC relief pitcher Trent Bivins was able to strike out Gray Hobrook for the second out and get Hayden Hutto to fly out to Goodin in right field to end the game.

“It felt like it was slipping away there at the end,” Cheek said. “The guys kept battling.” Cheek went on to say that he brought relief pitcher Garrett Peavy into the game in relief of starter Lorne Barineau. Barineau, who was recently voted the Region 4-A Pitcher of the Year, pitched five innings and gave up one run on four hits. He walked two and struck out two. “Lorne’s arm tightened up on him so we had to pull him quicker than we wanted to,” Cheek said. “He’s been a reliever all year. He was voted the Region Pitcher of the Year for a reason. He came out here and shoved it for five innings and then his arm tightened up on him. We went with Garrett and he got us through the sixth.” 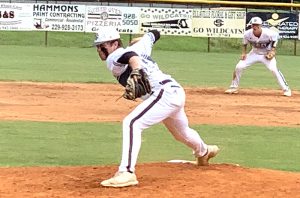 Schley County pitcher Lorne Barineau gave up one run on four hits and struck out two batters to lead the Wildcats to a 6-4 victory over Commerce in the deciding Game 3 of the best-of-three-game series.
Photo by Ken Gustafson

Bivins was brought on in the top of the seventh after Peavy walked the Tigers’ lead off hitter, Kody Mintz. Bivins walked the next two batters to load the bases for Chase Bridges. However, Bivins got Bridges to strike out swinging for the first out. The Tigers cut their deficit to two runs when Kane Goldman drew a walk, scoring Mintz from third. Fortunately for the Wildcats, Bivins was able to retire the next two batters to secure the game and the series for SC. “Trent came in and made the pitches when he had to,” Cheek said. “He was a little rusty. He had some arm tenderness earlier as well. There were base runners everywhere and the tying run was on base, but he came in and made the pitches. I was proud of him and proud of all of our guys. I told them that if we limit the walks and we cut down on the errors that we made, the game is really never close. We win 6-0 or 6-1. The good news is that we are moving forward. We’re back in the Final Four. That’s always a goal at the beginning of the season. There are a whole bunch of teams that wish they were where we are.”

Cheek went on to say that his club will face an extremely strong Irwin County team in the state semifinals. “Irwin County has had a good program for several years,” Cheek said. “It’s going to be a really good atmosphere next week.” 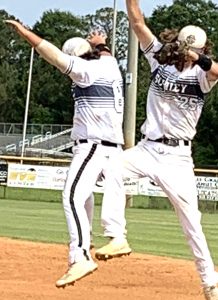 Dylan Windham (8) and Ashton Goodin (25) celebrate after the Wildcats defeated Commerce 6-4 in Game 3 to win the playoff series.
Photo by Ken Gustafson

The Wildcats scored the first two runs of the game in the bottom of the first inning. With one out, Dakota Albritton and Dylan Taylor both singled to put runners on first and second. Dylan Windham then drove in two RBIs on a single to left field.

The Tigers responded in the top of the second. With one out, Barineau walked Bridges. After Matthew Martin flew out to center field for the second out, Gray Hobrook drew a walk. Hayden Hutto then belted an RBI single to center field, cutting the Wildcats’ lead to 2-1.

Goodin increased SC’s lead back to two runs when he knocked a home run over the center field wall in the bottom of the fourth. With one out in the bottom of the fifth inning, Albritton, Taylor and Windham each singled to load the bases. Bivins then drew a walk, scoring Albritton and giving the Wildcats a 4-1 lead.

Goodin then reached on an error, allowing Taylor to score. Logan Wurtz lined into a double play, but Windham scored before the double play was completed, giving the Wildcats their sixth and final run of the game.

Taylor led SC’s offensive attack by going 3-for-3 at the plate and scoring two runs. Windham went 2-for-3, scored a run and drove in two more. Albritton also had a multi-hit game. He went 2-for-4 and scored two runs. The Wildcats committed two errors of their own, but took advantage of four errors committed by the Tigers.

Peavy, who came on in relief of Barineau in the sixth, pitched one inning. He gave up three runs on one hit, walked three batters and struck out one. Bivins came on in the seventh. He walked two and struck out two.

For the Tigers, Colby Rogers started on the mound. He pitched four innings, giving up three runs on five hits. He walked one SC batter and struck out four.

In Game 1 of the series on Wednesday, Taylor belted two home runs and pitched five scoreless innings to lead the Wildcats to an 8-1 victory. Taylor went 3-for-3 in the first game, scored two runs and drove in three RBIs. On the mound, he pitched the entire game, giving up one run on one hit. He walked two and struck out six batters. 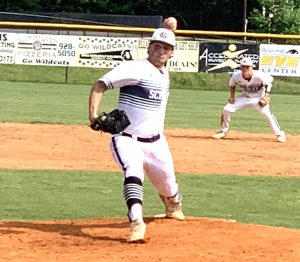 SC relief pitcher Trent Bivins came on in the seventh inning and was able to retire the last three outs to secure Game 3 and the series for the Wildcats.
Photo by Ken Gustafson

The Tigers responded in Game 2 by scoring five runs in the first inning en route to an 11-0 shellacking of the Wildcats. Goodin started on the mound for SC. He gave up five runs on four hits in one inning of work. Windham came on in relief of Goodin, but got roughed up as well. He gave up 6 runs on eight hits in two innings pitched. He walked one batter and struck out two. Michael Wainwright was the final pitcher used by the SC. He pitched one inning and gave up no runs or hits.

Chase Bridges led the Tigers in Game 2 by going 3-for-4 at the plate and driving in four runs.