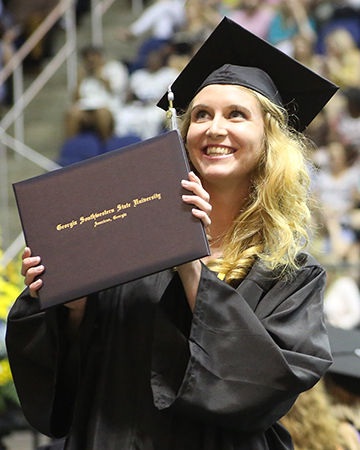 Savannah Peachey of Dawson looks up to family and friends as she celebrates earning her bachelor’s degree in elementary education.

AMERICUS — The Georgia Southwestern State University Class of 2019 took their final steps, and for some their first steps, on campus Wednesday at the Spring 2019 Commencement ceremony in the Convocation Hall. Approximately 307 students earned bachelor’s, master’s and specialist degrees.

“Twice each year we get to celebrate our most important and exciting event — commencement,” said GSW President Neal Weaver. “Georgia Southwestern’s campus is full of extraordinary men and women. We cherish our unique position from which we get to watch you grow and develop, both in knowledge and maturity, and because of this we take tremendous joy from your successes and great pride in your accomplishments. When we hear your name called, and we see the smiles on your faces, and we hear the shouts from the crowd cheering, we remember why we chose this profession. All of us at GSW are proud of you and are especially proud for you.”

In his fourth commencement address as GSW President, Weaver recognized the traditional students who graduated in an admirable four years who all earned a presidential gold coin. He also recognized those whose path to graduation took some different, less traditional routes.

“Maybe you’re a single mom, maybe you had a health issue you had to overcome, maybe you’re the first in your family to go to college … you all found a way to be successful even when things weren’t easy. For all of you who followed a broken road to our ceremony today, you may not be receiving a gold coin from me, but you certainly have my utmost admiration and respect.” 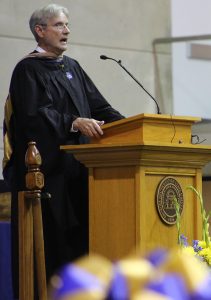 Ricky Arnold, president of GSW’s Alumni Association, spoke on the importance of joining the Alumni Association. He also gave special remarks about a former college classmate and close friend, Dr. George Bagley, who passed away a few years ago and whose daughter, Mimi Bagley Jennings of Soperton, was among those graduating in Wednesday’s ceremony with her master’s in nursing.

Weaver also recognized a few noteworthy graduating students that caught his attention. He starts with Chris Avery from Tyrone stating, “he has been on the Dean’s List for four years, was a member of the GSW soccer team, and earned Peach Belt Conference All-Academic Team recognition. Earlier this year, the Boy Scouts of America recognized Chris as the Top Male Peach of an Athlete Role Model, making him the first GSW student to earn this very prestigious award. He’s in an international honor society, a fraternity, and serves as a GSW marshal among other things. He was even selected as this year’s Homecoming King. Chris has done college very, very well. And he’s just one example of the outstanding students that are before us today.”

MeMe Harvey of Cordele “is a member of the Beta Gamma Sigma Business Honor Society, volunteers on campus as a Storm Spotter, and is a full-time employee of Chick-fil-A helping to open new restaurants all across the country. When her mother unexpectedly passed away this year, she took on a new role with her family and her siblings” all while maintaining her GPA and remaining active on campus.

Weaver continued, “Brandon Waters [of Pitts] returned to college to Georgia Southwestern after a successful career in ag sales and the business owner of a cow-calf cattle business, but the call to be a teacher never left his mind. He has maintained a 4.0 GPA and was named this year’s GSW Outstanding Scholar.”

Peagler’s message went on to impart some of the wisdom he’s learned over the years. He asked that all the graduates recognize their families and friends who supported them through their journey to this day. He urged them to realize they each of them possesses gifts and talents, and will make valuable contributions to the communities in which they choose to live, work, and raise a family. He said our society needs more people who are patriotic and willing to step up and volunteer in their communities.

“These are all great gifts,” Peagler said, “but the greatest gift I can think any of you can have is to see God in all people, and respect the peace and dignity of every human being. … I think that’s what Martin Luther King’s whole life story was about.”

In closing, Peagler offered, “If you remember only three things from this talk,” he said. “Remember that I urge you to be willing to take risks. I call upon you to be fully engaged and passionate about the commitments that you pursue. … You must be true to a set of values you can be proud of and which resonate with you. Be risk takers, motivators, and not self-centered. Have a servant’s heart. With these qualities, there will be infinite opportunities, varied possibilities, and a lifetime of happiness.”