Military wife and mother, daughter recall a lifetime of memories 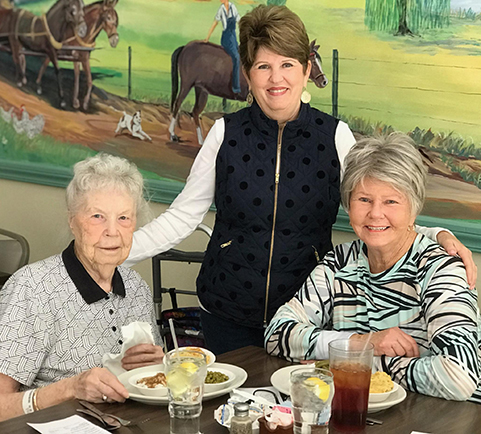 Sarah Bowles, at left, with her daughters, Judy Stinchcum, standing, and Sue Graber.

AMERICUS — While sitting in the sunroom of her villa at Magnolia Manor, Sarah Pitts Bowles, 97, mother of two daughters — Sue Bowles Graber and Judy Bowles Stinchcum  —surrounded by photographs and mementos of 75 years of marriage. As she enjoys a cup of coffee with her younger daughter Judy, the two share joyful memories of childhood and motherhood.

“As I think about Mother’s Day this year, I am so very thankful that I can still share another day with my mom,” said Stinchcum, as she explains being raised by a woman who gave of herself without hesitation or complaint.

“I am blessed to have been raised by a Godly woman,” Stinchcum said, adding that there were many Godly women in her family and this Godliness was handed down from generation to generation.

“She would always see that we children were in church on Sundays,” Bowles added of her memory of her mother, Carolyn Pitts. “She made God the center of our lives.”

Bowles described her mother as a very talented woman in all aspects. “My mother played the piano in church and taught Sunday school,” she said, describing days of hearing her mother play the piano and making sure they were well dressed.

“Cleanliness was next to Godliness,” she said. Her mother was a very fine seamstress who made sure she and her three sisters were well-dressed, groomed, and made use of their manners.

Stinchcum added, “My mother is the daughter of Earl and Carolyn Pitts of Griffin, Georgia.” She described her Grandmother Pitts as being a very clever seamstress for many years before opening a florist shop with a friend and then buying her out and running it herself.

“It was Griffin Florist shop,” Stinchcum, “and it was very successful, thriving for 40 years.”

“Sadly, my Grandad Pitts was murdered in 1969,” Stinchcum said. “She grieved hard but her faith held her,” describing her Grandmother, who, while left alone, rose to the hardship with resiliency, independence, and determination.

“She taught me so much about life,” Stinchcum said. “She always said that death was like a baby being born. It’s hard on that baby in the process, but once it’s born, it’s a whole, new life. Death is like that, in that it is painful and hard, but when you finally reach that death, a whole new life awaits.”

Bowles was not only a mother of two beautiful children, but a military wife to Col. Alvin Hoyt Bowles, who spent 35 years in the military. Often there were great challenges, but wonderfully exciting memories were made while raising their daughters.

“She was a young mother of my three-year-old sister, when my Dad got the orders to fly to an island in the Caribbean Sea,” Stinchcum related. “This island only had natives that lived there and a few American military people. It was a top-secret assignment, so Mom couldn’t tell anyone, including her parents, where she was going,” as she recalled a surprise as they arrived on the island. “They didn’t realize it at the time, but my sister was coming down with the measles. So, they were quarantined until she no longer could expose the natives who had never had the measles.”

Island life, whether in the military or not, was not easy. “When my mother was pregnant with me, she had to be flown to Puerto Rico to give birth, as there were no obstetricians or hospitals on the island,” Stinchcum said. “I remember mother telling me she had to check her shoes every morning for Gila monsters,” she said, adding that one night her mother said they were at the movies and they had to stop the movie and rid of the Gila monsters from the theater. “She certainly didn’t sign up for this, as a young wife and mother, but she made the best of it!” Stinchcum said, smiling in admiration.

Stinchcum described her childhood as exciting. “We moved so much when Sue and I were growing up,” she said, living in various places from Atlanta, Ga., Baltimore, Maryland, Jacksonville, Ala., Huntsville, Ala., and finally, to Paris, France. “We went to Paris for three years. Of course, my sister and I fought it since another move didn’t sound very exciting. But we made the move. I remember we traveled to Europe on the SS United States cruise liner. As I think about mother making another move away from her family, she never complained!” she said with amazement in her eyes.

As Bowles and her daughter sat finishing their coffee, they both agreed that the life of a military wife and mother was challenging, but there were exciting and very educational experiences along the way.

“We visited different counties with both, Mom and Dad,” Stinchcum said. “As a family, were able to go see the Dachau concentration camp in Germany. We were taught about the horrors that happened there, and must never happen again. My Mom and Dad wanted to be sure we learned that. and it has had such an influence on my life now and forever.”

Stinchcum explained she didn’t realize until she was grown how difficult the hardships were on her parents, especially the living conditions on the islands, without modern-day comforts. “We lived in an old French home which required dumping coal into a large furnace,” she said, adding the furnace would heat the whole house.

Stinchcum recalled a time when her Dad, after working, in the States, on an assignment at the Pentagon, came home one day and told her mother he was going to Vietnam. 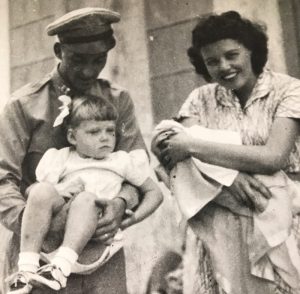 Col. and Alvin Hoyt Bowles and their young daughters. Dad is holding Sue, and mom is holding infant Judy.

“So, again, a new experience, but this time alone!” Stinchcum said. “My mother moved to an apartment in Annandale, Virginia, with two teenage girls who were beginning to branch out themselves. But, Mother never complained. She was like a single mom for a year.” That was a time when there was no internet, no Skype, no Snap Chat and no cell phones. “No email or telephone communication,” she said, adding there was just a couple of letters and cards a few times a month. “Mom handled it. Dad gave so much to our country. But, Mom made that possible for him.”

After her father returned home, he had a new assignment at Elon College, N.C., Stinchcum said, which was where her father would eventually retired and her mother would continue giving to others through her work volunteering with hospice and nursing homes. 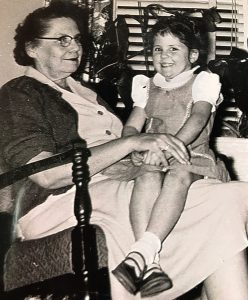 Sarah Bowles and her young daughter Judy. Notice that mom had taught Judy to cross her legs at the ankles.

Bowles and her husband, after the children were grown and on their own, eventually moved from North Carolina to Macon, Georgia, and then moved to the Villas at Magnolia Manor in Americus.

“They never missed the birth of their grandchildren/great-grandchildren, or a college graduation,” Stinchcum said, adding she was very proud to have had not only a phenomenal mother, but wonderful parents who loved their God and family.