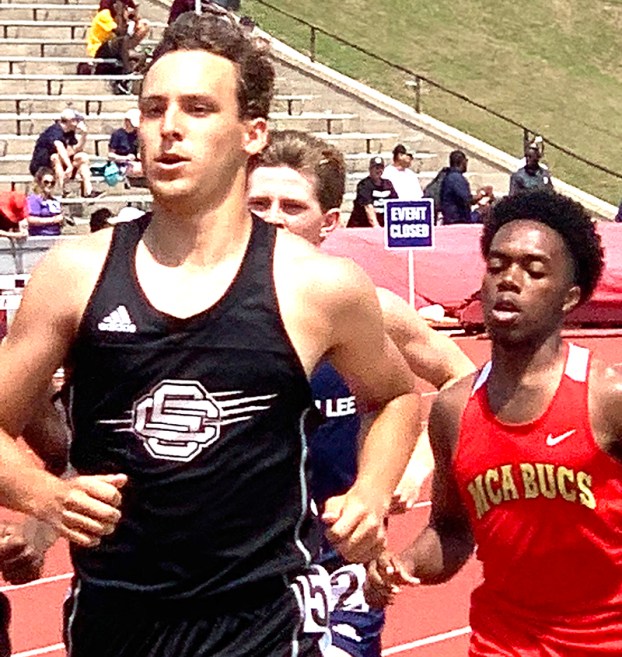 Schley County senior Noah Hammons competes in the 800 Meter Run with a time of 2:06.70. Hammons finished in fifth place in the event. Hammons was also a member of the Wildcats’ 4x100 Meter Relay team that finished in eighth place with a time of 44.52. Photo by Ken Gustafson

ALBANY – Both the Americus-Sumter and Schley County boys and girls track and field teams ended their 2019 seasons on a positive note as athletes from both schools turned in outstanding performances at the 2019 GHSA State Meet held Thursday through Saturday, May 9-11, at Hugh Mills Stadium in Albany.

The Schley County boys’ team finished in sixth place in the Class A-Public division with a total of 39 points. They finished just eight points behind fifth-place finisher Hancock Central (47) and they held off Greene County, who finished in seventh place with 36 points. Commerce won the boys’ Class A-Public state championship with 71.50 points.

“I am very proud of my guys,” SC boys’ head coach Scott Burgess said. “Anytime you can finish sixth out of 68 or so teams, it is a great accomplishment. A great percentage of our points this season came from seniors that have helped us win the region championship the last three years and have helped us finish in the top 10 at state the last three years. Therefore, we will have to have some younger guys step up next year if we want to keep those streaks alive.” 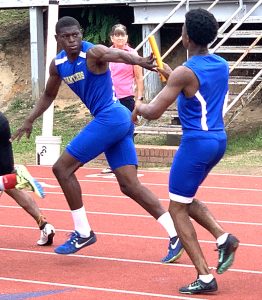 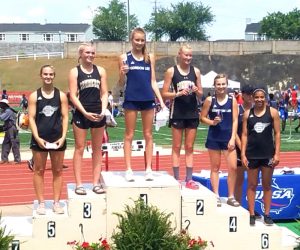 In the Pole Vault competition, SC’s Landon Dailey made it on to the podium by finishing in seventh place. Dailey vaulted a height of 9-06.00 to earn his spot. “I could have done a little bit better,” Dailey said. “I feel that I was thinking about it too much.” 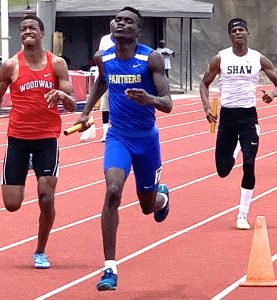 The Wildcats also had an athlete finish in the top eight in the Discus Throw. Zykevious Walker, a big-time college football prospect, showed that he has talent in this skill as well. Walker’s best throw was a distance of 120-05, good enough for a fifth-place finish. ”I did all right. I’ve just got to get better,” Walker said. “I’ve got to work on my spin. Right now, I’m just punching it. I don’t spin. I just need to work on my spin.”

The Americus-Sumter boys’ track team didn’t finish in the top eight of the Class AAAA standings as a team, but head coach Ryan McKenzie was extremely proud of the way his team performed. “I just love their effort. I love their determination and the fact that they just came out and worked,” McKenzie said. He went on to say that there is a lot to look forward to because everybody that competed on the final day of competition is a junior. “They have an opportunity to come back and to continue buying in to what we’re selling,” McKenzie said.

The Panthers finished in a four-way tie for 17th place with Marist, Northside (Columbus) and Cross Creek with 13 points. St. Pius X ended up winning the boys’ Class AAAA state championship with a total of 81 points. 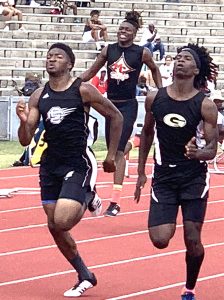 Individually, the Panthers had some athletes finish in the top eight of their respective events. Keyvonte Nelson finished in fourth place in the 100 Meter Dash with a time of 11.11. “I could have done better, but it’s good experience. This is my third year doing this,” Nelson said. “I was just happy to make it to the finals. Last year, I got put out. I was just happy to make it this far.”

In the 400 Meter Dash, Jaylen Mable was able to finish in sixth place with a time of 50.00. Mable ran a faster time of 49.76 in the preliminary round to get to the finals.

In the triple jump event, Trevian Thomas barely missed making it on to the podium. He finished in ninth place with his best jump being 42-11.00. Daniel Dorsey of West Laurens barely beat Thomas out for the eighth spot by jumping 43-04.25. 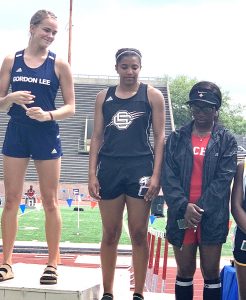 SC’s Nyiah Kelley finished as the state runner-up in the 100 Meter Hurdles.
Photo by Ken Gustafson

The 4×400 Meter Relay team of Breylon Green, Trevian Thomas, Rondravious Terry and Jaylen Mable finished in fourth place in the event with a time of 3:22.68. They improved their time from the preliminary round, which was 3:23.65. “We made changes in our run. We all started it out so we would have a better finish and drop down a couple of seconds,” Terry said. “We ran faster today. Our adrenaline was up.”

The Schley County girls’ track and field team finished in sixth place overall with 27.50 points. The Lady Wildcats were able to hold off both Claxton and Bowdon, who finished in a tie for seventh place (24.50). “Our girls have done very well. They competed hard in three days of oppressive heat,” SC girls’ head coach Jim McFather said. “Nyiah (Kelley) was in five events and did great. You can tell that the heat has taken a toll on all the girls out there. When you compete in five events, you don’t make excuses. It’s tough, but we’ve done well and we’re fortunate to have them back for next year.” 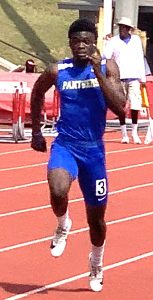 Kelley was the state runner-up in the 100 Meter Hurdles, finishing in a time of 16.37. In the preliminary round, Kelley qualified with a time of 16.62. Kelley also made it on to the podium in the 300 Meter Hurdles, finishing in seventh place with a time of 52.67. Kelley, along with her teammate Perri Devane, finished in the top eight in the Girls’ Pole Vault competition as well. Devane cleared a height of 8-0 (Eight feet) to earn fifth place and Kelley finished in sixth as she was able to clear a height of 7-6 (seven feet, six inches). Kelley was a member of the SC girls’ 4×100 Meter Relay team that finished in fourth place with a time of 51.00.

The 4×400 Meter Relay team, of which Kelley was also a member, did not qualify for the finals of that event, but finished in 10th place in the preliminary round with a time of 4:31.43. They finished six seconds shy of the eighth and final qualifying spot, which was claimed by Georgia Military College in a time of 4:25.76. 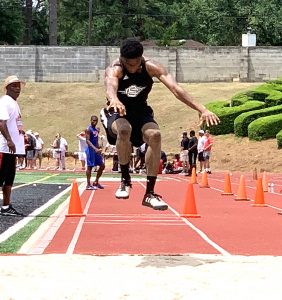 Schley County senior Jackson Fulks competes in the Triple Jump. Fulks finished as the state runner-up in this event in the Class A-Public division.
Photo by Ken Gustafson 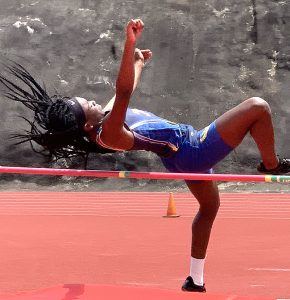 Americus-Sumter sophomore Selliyah Owens clears the bar in one of her jumps in the Class AAAA high jump competition. Owens finished in 14th place, jumping at a height of 4-08.00.
Photo by Ken Gustafson

For the Americus-Sumter girls’ team, no one finished in the top eight in any of the events, but head coach Shanika Dyson was not disappointed with her team’s effort. “This was a learning season and a great experience for the girls that advanced through the rounds,” Dyson said. “We didn’t have any PRs (personal records) at state, which was unfortunate, but that’s how it is sometimes.” Dyson went on to say that it was the first time and the last time for the seniors on her squad to qualify for the state meet and that they were happy to be there. “Honestly, no regrets. This season was awesome and a learning experience all around,” Dyson said. 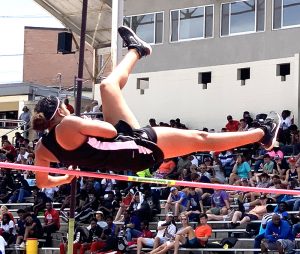 Selliyah Owens, who qualified for the state meet in the High Jump event, struggled during the competition due to an ankle injury. Owens finished in 14th place with her best jump being a distance of 4-08.00. “She was excited to have competed in state,” Dyson said. “She will be returning to defend her records and region championship title next year, which we are already looking forward to.” 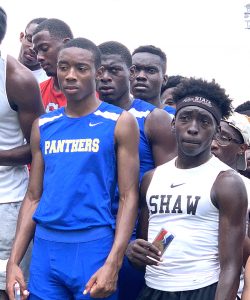 The ASHS boys’ 4×400 Meter Relay team of Breylon Green, Trevian Thomas, Rondravious Terry and Jaylen Mable stand on the podium as fourth-place finishers in the event.
Photo by Ken Gustafson

In addition to the success of the local schools here in the Sumter County/Schley County area, a long-standing record was broken in the Boys’ Class AAAA Shot Put Competition. Tanner Duffin of St. Pius X broke the state record of 66-07, which had stood since 1966. Duffin broke that record by throwing a distance of 66-10.5 (66 feet, 10.5 inches).