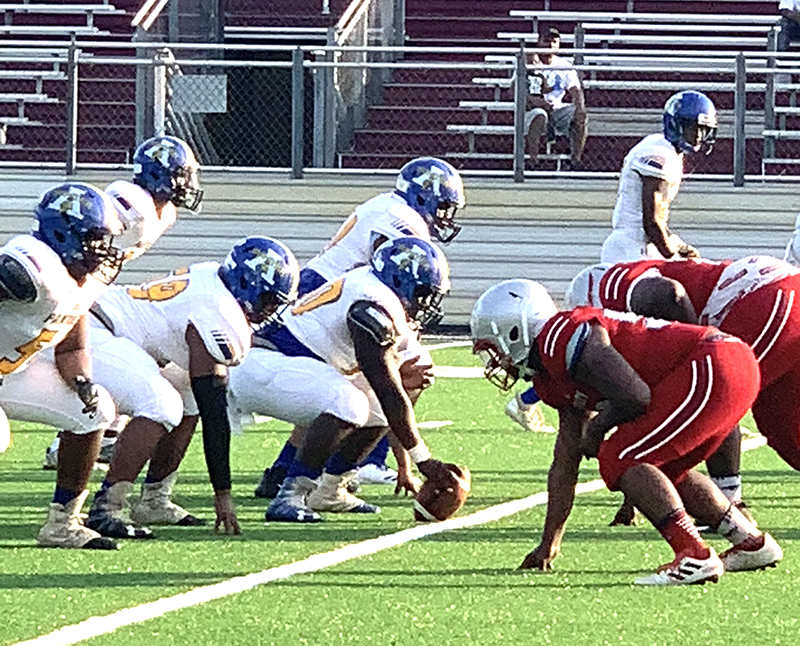 The Americus-Sumter Panthers are on offense during their spring scrimmage game against Southwest High School in Macon. Photo by Ken Gustafson

MACON – The Americus-Sumter High School football team traveled to Macon to conclude their spring season with a scrimmage game against the Patriots of Southwest High School in Macon. This was a time for the Panthers to demonstrate the skills they had been practicing over the last two weeks under first-year head coach Ross Couch. Unfortunately, three turnovers in the first half hurt ASHS, and the Patriots went on to win 26-13.

Being that it was just a spring scrimmage game, Couch was not worried about the scoreboard, but was more concerned about the overall improvement of his team.

“Every time you play in a spring scrimmage, the scoreboard means very little,” Couch said. “It’s up there to make sure that we are competing and to make sure that there is an end result, but our goal for this spring was two-fold: to get everything installed and to see how athletic we are across the board. We played some guys that we had to get film on early and then rolled a lot of guys in late. We will be able to see what we can and can’t do. We’re going to figure out who is going to fit in what places and figure out what direction we need to go. Anytime you can get out here and compete against somebody in a different color in May, it’s always a good thing. It’s a little closer to full football season.” 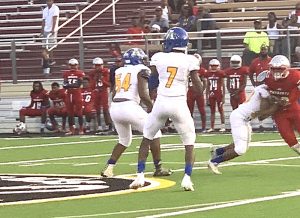 Early in the game, ASHS quarterback Kanova Willoughby fumbled the ball. The ball was recovered by Ty’Juhn Blash, who ran it back 35 yards for a Patriot touchdown. The extra point was good and the Patriots had an early 7-0 lead.

The Panthers responded positively by moving the ball down inside the SWHS 10-yard line. Willoughby was able to find his brother, Quevoluia Willoughby, for a five-yard touchdown reception. The extra point was no good, but the Panthers were back in the game, trailing 7-6. 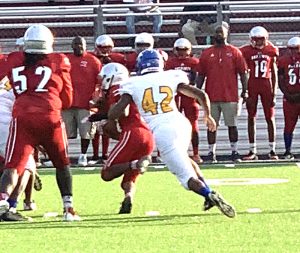 However, two fumbles and an interception plagued ASHS in the first half. The Patriots were able to take advantage as running back Marqavious Henderson scored two rushing touchdowns. Later on in the first half, the Patriots added to their lead when quarterback Travion Searcy completed a touchdown pass to Jaden Williams. The extra point was good and SWHS took a 26-6 halftime lead.

The Panthers responded positively to start the second half. They were able to move the ball inside Patriot territory thanks to a big gain by running back Brian Ross. A couple of plays later, Willoughby found Ross for a short 11-yard touchdown pass. The extra point was good and the Panthers cut their deficit to 26-13. 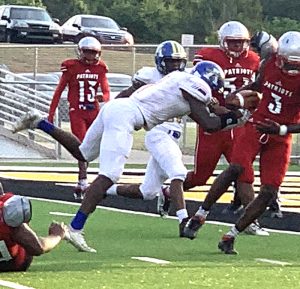 The Panther defense got a stop on the Patriots’ next possession and got the ball back. At about the ASHS 30-yard line, Willoughby ran the ball on a quarterback keeper for 26 yards down to the SWHS 44. After a short gain Mamadou Aeita and a reception by Ross, the Panthers were down inside the 30. However, an ineligible-man-down-field penalty pushed them back. They tried to go for it on 4th down, but were unsuccessful. 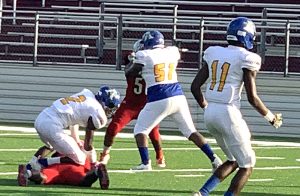 The defenses of both teams were able to hold each other’s offenses on their next possessions. Late in the first half, the Panther defense asserted itself as Michael Holt, Marcus Douglas and Hashim Haugabook all made plays.

The Panthers will continue their workouts throughout the summer before the season begins in August.