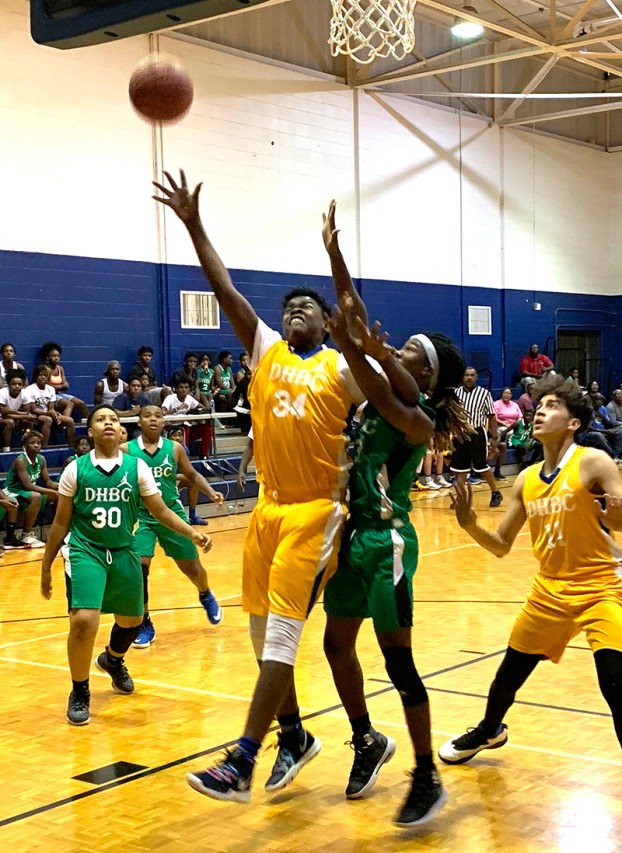 14u Warriors forward Canaan Jackson goes up for a rebound. Photo by Ken Gustafson

AMERICUS – It’s summer time. School is out. It’s time for kids to relax, have fun and to be involved in healthy activities. This is also a time for junior high and high school athletes to sharpen their skills in whatever sport they are playing.

For those athletes who love basketball, the Dwight Harris Boys Club Basketball League (DHBCBL) is just the thing they need to improve their individual talents to get ready for the upcoming season. More importantly, however, they’re in a positive, safe environment and off the streets.

When he started the league seven years ago, Dwight Harris, who serves as Athletic Manager for the Sumter County Parks and Recreation Department, had a goal of finding an alternative to keep kids off the streets during the summer. The league has given kids an opportunity to do something constructive and fun during the summer months. 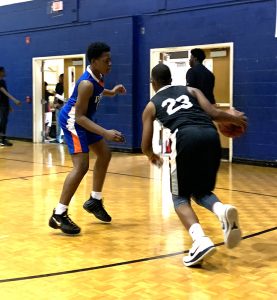 14u Raptors guard Devin Dowdell tries to drive baseline against the Thunder.
Photo by Ken Gustafson

On Tuesday, June 4, there were some exciting games played. In the 11u division, the Raptors defeated the Bucks 39-29 behind Briceton Terry’s 19 points. Amari Hubbard also scored in double digits for the Raptors by pouring in 16 points.

In the 14u division, the Warriors defeated the Bucks 46-25. Brandon Pope scored 20 points to lead the Warriors’ offensive attack. 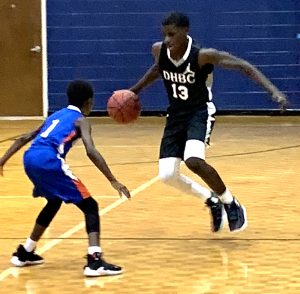 14u Raptors guard Cameron Evans advances the ball up the court against the Thunder.
Photo by Ken Gustafson

Several high school basketball players who play for Americus-Sumter, Southland Academy and Schley County play in this summer league for the purpose of getting ready for the upcoming season.

On Thursday, June 6, several of those high school players faced off against each other in the final game of the evening. It was between the 17u Bucks and the 17u Rockets. It was a close game throughout, but the Bucks ended up edging out the Rockets 47-42. Americus-Sumter guard Quevoluia Willoughby scored 20 points to lead the Bucks. Willoughby’s teammate, Trae Brown, is the Panthers’ three-point specialist. Brown scored 16 points to aid the Bucks in the victory. Shomari Gaines, who plays his high school ball at Macon County, led the Rockets with 13 points on the night. 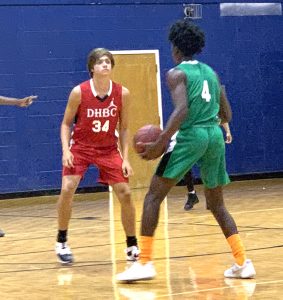 Americus-Sumter guard Kanova Willoughby dribbles the ball for the 17u Bucks against Southland’s Owen Exley, who plays for the 17u Rockets.
Photo by Ken Gustafson

Southland Academy head basketball coach Rundy Foster coaches the 17u Thunder in the DHBCBL. For Foster, coaching in the league gives him the opportunity to further his life’s calling and to coach in an extremely competitive environment. “I love working with children. It doesn’t matter if they’re from Southland, Americus-Sumter or Schley County. I love working with them and that’s the biggest benefit for me,” Foster said. “The best benefit for our kids is that we’re not going to play any better competition than what you see out here. As far as the kids from Southland are concerned, not only are they getting to play against good competition, they are also able to establish relationships with kids outside of Southland, which is a good thing. Dwight does a great job with this league. No one team is dominant. He mixes it up really well. It’s a good league.” 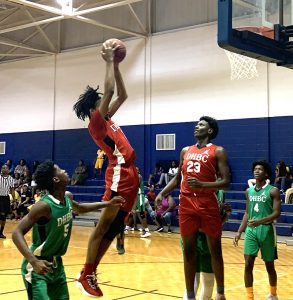 Shomari Gaines seen here rebounding the ball and going up for a put back for the 17u Rockets. Gaines plays his high school basketball at Macon County.
Photo by Ken Gustafson

Most of the players on these teams are residents of Sumter and Schley Counties, but there are also players and teams from nearby Macon County as well. 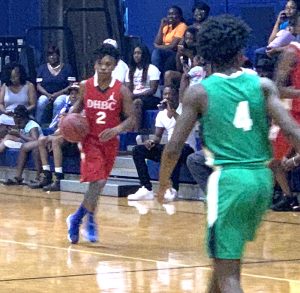 Guard Melton McCoy seen here with the ball for the 17u Rockets. McCoy is a guard on the Americus-Sumter basketball team that reached the state championship this past season.
Photo by Ken Gustafson

The DHBCBL will continue Monday through Saturday of every week from early June until Tuesday, July 16. That is when the regular season will end. During the regular season, four games will be played nightly every Monday through Friday and six games will be played on Saturdays. The only weekdays on which no games are scheduled are Wednesday and Thursday, July 3-4.

Once the regular season ends, each division will have their playoffs Wednesday through Friday, July 17-19. Championship Saturday will be on Saturday, July 20.