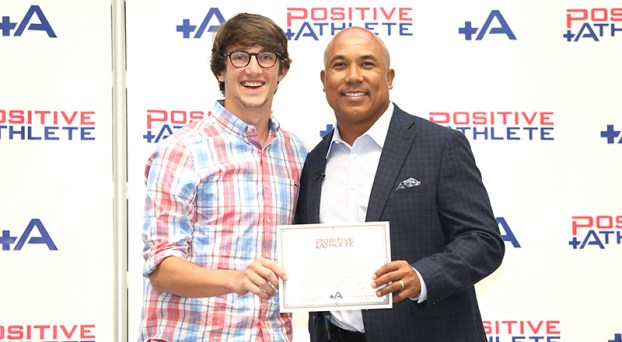 Southland Academy student-athlete Gabe Roland (left) is standing next to former University of Georgia and Pittsburgh Steelers football star Hines Ward (right). Roland was one of 29 high school student athletes to receive the Positive Athlete Award for the state of Georgia. Submitted Photo

Over 5.400 nominations from coaches, principals, athletic directors, teachers and parents were submitted. The nominations represented 415 public and private schools. Former Forest Park High School, University of Georgia and Pittsburg Steelers football star Hines Ward, along with Atlanta businessman Scott Pederson, created Positive Athlete as a movement for more positivity in youth sports. In addition to athletic excellence, each nominee was required to show characteristics of having an optimistic attitude, teammate encouragement, servant leadership, a heart for others, the ability to admit imperfections, giving 100 percent at all times and putting the team first before themselves.

“We did not put out a search for the best athletes in Georgia,” Ward said. “We put out a search for kids with positive attitudes whose efforts don’t necessarily show up on the stat sheets. These kids are also positive role models in their schools who get involved in charitable causes, have already learned the meaning of giving back at an early age and may have overcome difficult circumstances and remained positive.”

Roland represented the sport of Boys Alternative Shooting. While at SA, Roland received the State Farm Scholar Athlete Award during each of his four years of high school. Roland was also a Sumter County Chamber Champion and was voted Wittiest in his senior class. He was also the President of the Student Government Association and Treasurer of the National BETA Club. Roland was a three-year member of the SA track & field team, played varsity basketball for four years and was a co-captain his senior year. Roland also ran cross country for five years and was a member of the SA region championship and state championship Cross Country teams in 2014 and 2015. Roland was also an inaugural member of the SA Clay Target Shooting Team and was voted captain of the team during his junior and senior year.

Roland is a member of First Baptist Church in Americus, where he volunteers with Operation Christmas Child. He also volunteers with the DFACS Adopt a Family program as well as with the Sumter Humane Society’s dog and cat food drives.

In addition to those projects, Roland volunteers his time with Toys for Tots, Americus Welcome Center and the Magnolia Manor Glow Run. Roland also traveled to New Orleans, LA in 2016 to participate in the “Clean up New Orleans” project and volunteered with the Macon/Bibb County Teen Maze in 2018.

Roland is the son of Jamie and Missy Roland of Americus and plans to attend Georgia College & State University in the fall.

Positive Athlete Georgia is a subsidiary of its parent company, Celebrate Positive, LLC. It is made up of a group of high-character professional athletes who have teamed up to promote the benefits of positivity to young athletes around the world.