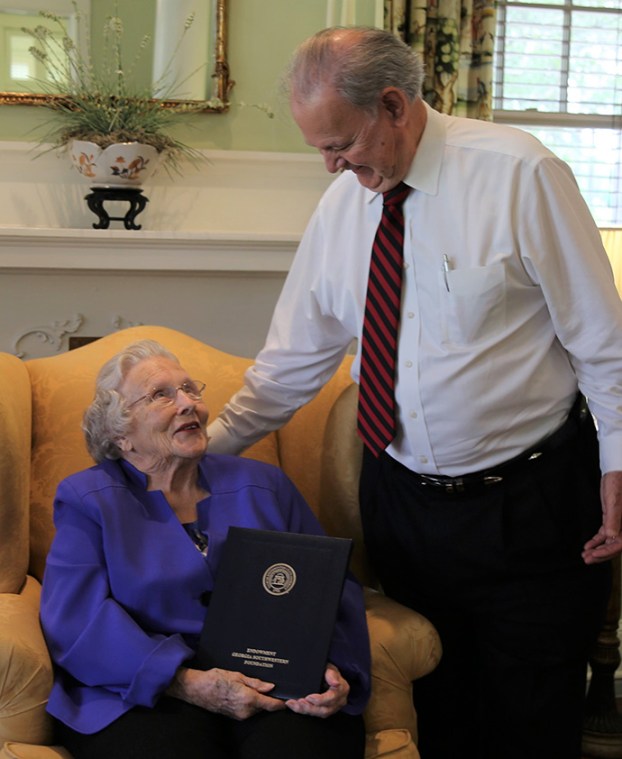 Sam Adams, Ph.D., established the Rebecca McNeill Scholarship at GSW in honor of his former teacher and the impact she had on his life as well as countless others.

Adams, a GSW alumnus (’73) who splits his time between homes in Buford and Americus, is a former assistant director for veterinary programs at the Centers for Disease Control and director of the Division of Comparative Medicine for State University of New York Downstate Medical Center. He created the scholarship in honor of McNeill because of the influence she had on his life as well as her service to education at the high school and collegiate levels.

McNeill, fondly known to many as “Mrs. Rebecca” and long-time Americus resident, was a beloved teacher and mentor to her high school students. She was also highly respected on GSW’s campus, where she served as a faculty administrator until her retirement in 1992.

Established less than a year ago, the scholarship has already helped its first recipient, Jackie Larsen of Americus, graduate with her bachelor of science in nursing. Larsen plans to take the boards in the coming weeks and start her career at Phoebe Putney Memorial Hospital.

“If not for this financial support, I would have had to put this path on hold,” Larsen writes in her thank you letter to Adams. “You have given my daughter and myself the chance for a brighter future. It wasn’t until I became a single parent that I realized I needed a career I was passionate about and was attainable.”

“Words cannot express how thankful I am for the opportunity to have continued pursuing my nursing education at GSW,” she continued. “Your support ensured my final two semesters were substantially less stressful, allowing me to focus on the curriculum and enter the workforce as a competent and confident nurse.”

McNeill dedicated herself to learning and teaching when she entered the field of education. She attended Abraham Baldwin Agricultural and Huntingdon Colleges prior to receiving her Bachelor of Science and Masters of Science Education degrees, and all but a dissertation toward her doctorate, at the University of Georgia.

The endowment is a permanent fund that will provide scholarships to enrolled students at GSW for years to come. Awarded annually, preference will be given to students majoring in nursing or science with at least a 2.8 grade point average (GPA) who are considered financially deserving.