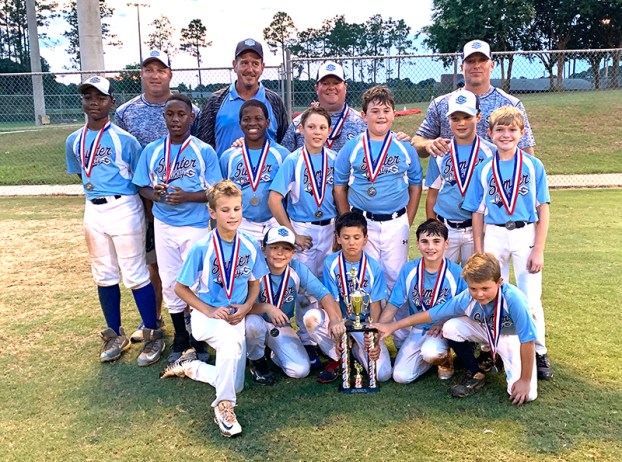 MOULTRIE, GA – The 10u Sumter County All-Star baseball team came very close to winning the Georgia Recreation and Parks Association (GRPA) District 3 Tournament. However, they fell short to the Moultrie 1 team by the score of 12-5 to finish as tournament runners-up at the Magnolia Sports Complex in Moultrie on Monday, June 10.

Moultrie had two teams competing in the 10u tournament.

It was a tough task for the boys from Americus. They defeated the Moultrie 2 team by the s core of 14-7. However, the Moultrie 1 team had not lost. The Sumter County (SC) All-Stars would have to beat them twice in order to win the District 3 Championship and earn a berth in the GRPA State Tournament. 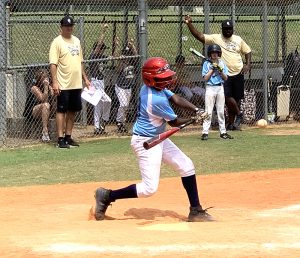 Austin Davis is at the plate for the SC 10u All-Stars.
Photo by Ken Gustafson

Sumter County started out strong in the top of the first inning as they scored four runs. Brooks Potter, Nolan Minter, Max Kelley and Jordan Minter each got hits to produce runs. Unfortunately for SC, the Moultrie 1 team responded with three runs in the bottom of the first, four in the second and one in the third.

SC responded with another run in the third inning. Jordan Minter singled in his brother Nolan to give SC its fifth run of the ball game. However, that would be it for SC as far as run production was concerned. Moultrie 1 added three more runs in the fourth and one in the fifth to seal the 12-5 victory and a berth in the state tournament.

“We played hard. I’m really proud of the boys,” SC head coach John Mixon said. “We worked hard this year. I think we put a great product on the field. I’m really proud of everybody. We came up a little short in the end, but hats off to Moultrie. They played a better game. I wish them luck in state.” 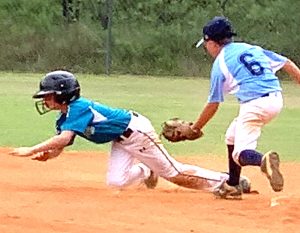 SC’s Noah Mixon tags out a Thomasville runner in the SC 10u All-Stars’ victory over the Thomasville YMCA All-Stars.
Photo by Ken Gustafson

To get to the point where they would be playing for the district championship, the SC 10u All-Stars first had to take down the Moultrie 2 team. They were able to do that by scoring six runs in the sixth inning to secure the 14-7 win. In this game, third baseman Jackson Wilder went 4-for-4 at the plate and the designated hitter, Nolan Minter, went 3-for-4 to lead SC’s offensive attack. Noah Mixon, Jordan Minter, Wes Brock, Max Kelley, William Webb and Brooks Potter also had multiple hits in this game. 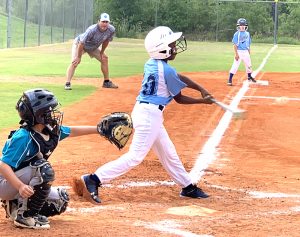 Vincent Kearse tries to make contact against Thomasville. Kearse had a single and an RBI double in the SC 8u All-Stars’ 12-9 loss to the Thomasville YMCA All-Stars.
Photo by Ken Gustafson

The SC 10u All-Stars would not have been playing on Monday had it not been for their strong performance on Saturday, June 8. The boys from Americus began the tournament with a 12-9 win over the Thomasville YMCA All-Stars. However, they lost their second game of the tournament to the Moultrie 1 team 11-5. This put SC in the losers bracket. They would have to win out in order to win the District 3 Championship.

In their third game of the tournament, SC responded with a vengeance by defeating Thomasville for a second time. This time, the SC All-Stars won 22-6. Jackson Wilder, Nolan Minter, Max Kelley, Noah Mixon and Wes Brock each went a perfect 3-for-3 at the plate in this game. 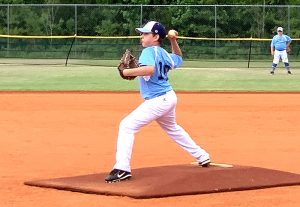 The Sumter County 8u All-Stars finished in third place in the 8u District 3 Tournament. They began the tournament on Saturday, June 8, with a hard-fought 12-9 loss to the Thomasville YMCA All-Stars. In that game, both Luke Lamberth and Pepper Lockhart went 3-for-3 at the plate with two singles and a home run.

SC rebounded in their second game by overwhelming Moultrie by the score of 18-3. This put the boys from Americus in a matchup on Monday, June 10, against their neighbors on the other side of Lake Blackshear: the Crisp County 8u All-Stars. Unfortunately for SC, they came up short as Crisp County won by the score of 12-8, eliminating SC from the tournament. In spite of the loss, SC still finished the tournament in third place. 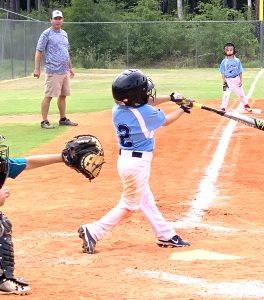 Gage Norman is at the plate for the SC 8u All-Stars. Norman went 2-for-4 with two singles in their 12-9 loss to the Thomasville YMCA All-Stars.
Photo by Ken Gustafson

The Sumter County 12u All-Stars had a rough go of it in their District 3 Tournament. They lost their opening-round game to Crisp County 20-4 and fell to Moultrie 13-4 in their second game. In spite of going 0-2 in the tournament, the SC 12u All-Stars still had a fine season.

AMERICUS – The Alternative Baseball Organization is a 501c3 organization that provides authentic baseball for teenagers and adults with autism... read more