Hawkins family members, former local and present city officials, and other were part of the official ribbon-cutting for the new South Jackson Street Depot, funded through SPLOST revenues.

AMERICUS — Americus has a rich and multi-layered history from its founding in 1832, through its recent past. On Saturday, June 15, the Sumter Historic Trust and the city of Americus commemorated part of this history by unveiling a new marker to the Savannah, Americus, & Montgomery (SAM) Railway and cutting the ribbon at the SAM Shortline Depot on South Jackson Street.

After a brief welcome from Americus Mayor Barry Blount and an invocation by the Rev. Keith Parks, Sumter Historic Trust President Meredith Banks Owen, Trust Archivist and Historian Lee Kinnamon, and retired Georgia state Sen. George Hooks each gave their own remarks. The plaque, erected by the Sumter Historic Trust with financial contribution from the Charles L. Mix Memorial Fund and the city of Americus, is part of a new marker program that promises to bring greater visibility to unique stories in the community’s shared past.

The SAM Railway marker is a useful addition to the city’s commemorative signage for a simple reason: railroads are key to understanding the first century of local history. As Kinnamon explained in his brief outline, railroads turned Americus from a “courthouse town” with a few hundred inhabitants in 1850, to the eighth largest city in Georgia by 1890. In the 1880s alone, the city’s population nearly doubled. During a second wave of railroad construction and amid conflict between Americus and existing railroad companies, Samuel Hugh Hawkins organized local investors to create the Americus, Preston, & Lumpkin Railroad in 1884 — rechartered as the SAM Railway in 1888. The railway contributed to a period of rapid local growth as well as the emergence of new towns, including Cordele, Leslie, and Plains.

As was common in the boom-and-bust economic cycles of the 19th century, the SAM Railway did not last for long. In December 1892, the same year the Windsor Hotel opened in downtown Americus, the railway faced a financial crisis that became known nationally as the Panic of 1893. By 1900, the Seaboard Air Line owned the old SAM Railway, but the significance of the SAM cannot be measured in merely whether it “failed” or “succeeded.” Americus continued to benefit from the increased rail connections in ways that are still evident more than a century later. From the downtown commercial district to the elaborate Queen Anne houses and cottages, much of the historic fabric of Americus rode the rails in pre-fabricated form. In the late-19th and early 20th centuries, railroads touched almost every aspect of economic, political, and social life in Americus. The fortunes of cities like Americus rested on having a favorable location along the nation’s entangled web of rails. The history is written in the streetscape. 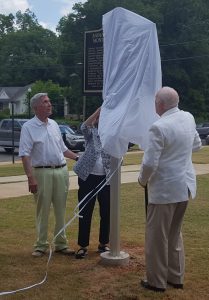 Place matters, and it is therefore fitting that the both the marker and the new Americus Depot on Jackson street are on the original location of the 1880s SAM depot. The modern depot serves as a gateway for thousands of visitors aboard the modern SAM Shortline, an excursion train that runs from Cordele to Plains. While the marker unveiling commemorated the city’s past, the ribbon cutting commemorated Americus’s prospects for the future as a tourist destination. The twin events drew nearly 100 people, including U.S. Rep. Sanford Bishop, D-Albany, and many Hawkins descendants from out of state.

Modern historical marker programs — like railroad construction in the 19th century — can be a risky venture. Markers are costly to build, nearly impossible to change after construction, and are liable to trigger spirited debates about their mentions and omissions. Yet historical markers can also be used to encourage contemplation about historical context and serve as a starting point for conversations about the past and its legacy for current and future generations. It is significant that the Sumter Historic Trust has chosen to make a marker program a key part of its new initiatives that also includes a lecture series on African American history, an annual summer camp for middle school students, and — later this summer — a new website.

With so much important local history still absent from the commemorative landscape, the Sumter Historic Trust and community partners have a great opportunity to tell a new history of an old town. The boosterism of the “New South” in the late-19th century promised prosperity through railroads and other forms of economic modernization. That promise went largely unfulfilled, but it left a rich historical layer that contributes to the “charm” or the intangible “sense of place” today. Honest memorialization and heritage tourism, including a reckoning with the tougher stuff of American history, makes fewer lavish promises, but has an even greater potential. It offers hope that through a better understanding of the past, the present generation can make better decisions for the future.