Evans and Dowdell lead 14u Raptors to victory in DHBCBL play 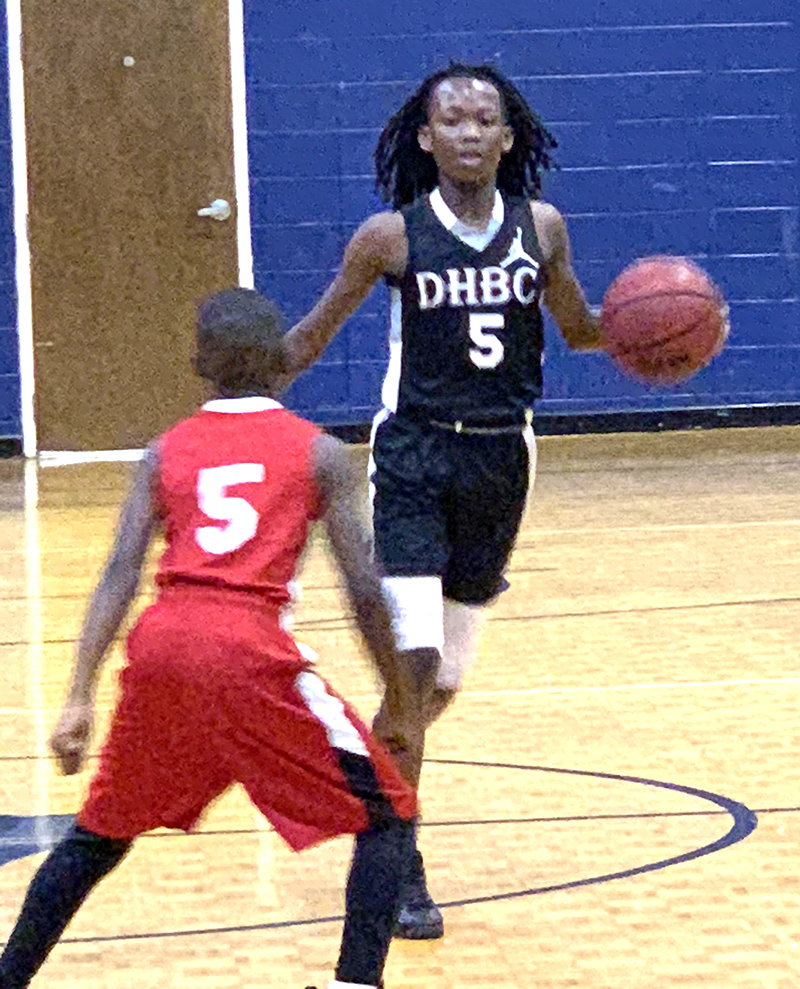 11u Raptors guard Amari Hubbard (5) scored 16 points to help lead his team to a 57-43 victory over the Rockets. Photo by Ken Gustafson

AMERICUS – Cameron Evans and Devin Dowdell each scored in double figures to lead the 14u Raptors to a 55-30 victory over the 14u Bucks in the Dwight Harris Boys Club Basketball League (DHBCBL) on Thursday, June 27, at the Americus-Sumter County Ninth Grade Academy.

The Bucks took an early lead in the first half, but the Raptors took over during the remainder of the half and went into halftime with a 24-17 lead.

In the second half, it was all Raptors. They scored 14 unanswered points to take a 38-17 lead before Braylon Terry ended the Bucks’ scoring drought with a basket.

14u Raptors guard Ja’Quavious Goober runs the offense. Goober scored three points in the Raptors’ win over the Bucks.
Photo by Ken Gustafson

However, that didn’t stop the onslaught of the Raptors. They continued to press the Bucks full court and created numerous turnovers. They were able to score baskets on numerous fast breaks and cruised to the 55-30 win.

Evans led all scorers with 15 points and Dowdell had 13. The Raptors also got scoring contributions from James White and Tylek Luster, who scored eight points each. Bryan Williams and Zyerre Williams each scored four points and Ja”Quavious Goober scored three points to round out the scoring for the Raptors. 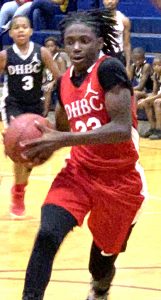 11u Rockets guard A.J. Kearse drives to the basket against the Raptors. Kearse scored 30 points in this game to lead all scorers.
Photo by Ken Gustafson

Terry led the Bucks in scoring with 12 points. Chris Luster, Jordan Mathis and Dakaryan Hurley each scored four points. Javion Terry, Jermiah Wright and Covery Hill each had two points to round out the Bucks’ scoring.

On Wednesday, June 26, D.J. Hurley of the 14u Thunder scored 34 points to try to will his team to victory over the Warriors, but it was not enough. The Warriors got 27 points from Brandon Pope and 10 points from Cannan Jackson and went on to win 66-51. Oscar Harris chipped in eight points. Kadarrius King scored six points and both Ashton Sims and Javin Lewis each scored five points for the victorious Warriors. Mike Terry scored nine points for the Thunder. Jaseph Jordan and Ashton Pope scored five and three points respectively to round out the Thunder’s scoring. 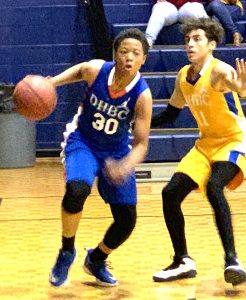 Mike Terry of the 14u Thunder (30) scored nine points in the loss to the Warriors.
Photo by Ken Gustafson 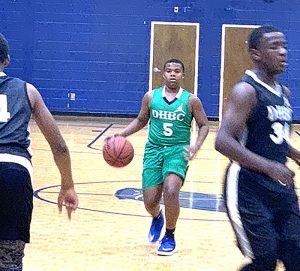 14u Bucks point guard Braylon Terry runs the offense. Terry scored 12 points in the loss to the Raptors.
Photo by Ken Gustafson

Both teams kept it close for the next few minutes. With the Raptors leading 37-32, Brenden Covin hit a three-pointer to bring the Rockets to within two points at 37-35. 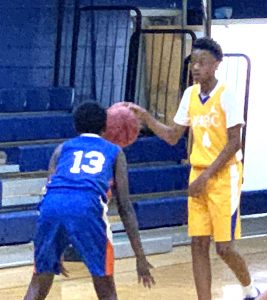 14u Warriors guard Brandon Pope scored 27 points to lead his team to a 66-51 victory over the Thunder.
Photo by Ken Gustafson

However, the Raptors were able to retake control of the game. They outscored the Rockets 20-8 the rest of the way to secure the 57-43 win. Amari Hubbard and Joshua Coleman were also in double figures for the Raptors. Hubbard scored 16 points and Coleman poured in 15. For the Rockets, A.J. Kearse led all scorers with 30 points and Britian Griffen chipped in 11 in the losing cause.