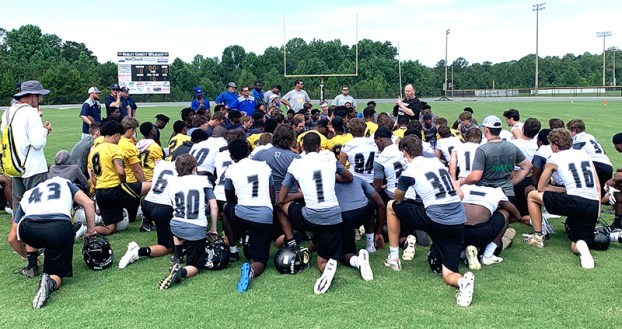 The Schley County, Chattahoochee County, Wilcox County and Taylor County football teams gather together for prayer after working and competing against each other at Schley County’s annual FCA football camp. Photo by Ken Gustafson

Learning to win at football and at the game of life: Schley County hosts annual FCA football camp

The Wildcats competed with high school teams from Chattahoochee County, Taylor County and Wilcox County in seven-on-seven passing drills and the teams competed against each other in a seven-on-seven tournament.

The Wildcats competed hard, but struggled at times on defense as they were beaten deep a couple of times. However, they did make some impressive plays offensively. Tight End Zykevious Walker made a nice catch at the five-yard line and Wide Receiver Zamon Ross also made a fine catch during passing drills against the defense of Taylor County. 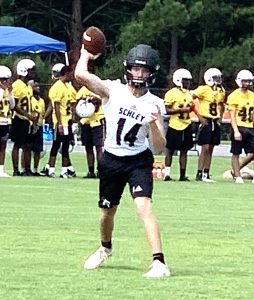 After the football was over with, Schley County head coach Darren Alford challenged his players to have fun and to have passion about playing the game. “You have to find a way to like football,” Alford said. He exhorted his team to have the same passion and fun that the Taylor County players were having. “Those guys over there are having a great time. They’re having fun. You need to do the same.” Alford then reminded his team that they will need to step up their effort and commitment in July by getting in shape and being at every practice no matter what the reason. “I love you, but we have to get better,” He said.

After the football drills were finished, all of the teams gathered in the school lunchroom for a time of food and fellowship. Most importantly, they heard a life-changing message from Coach Alford’s brother, the Reverend Warren Alford.

Warren Alford is a member of the Strength Team, a group of men who travel all over the world entertaining crowds by breaking bricks, ripping up phone books and running through brick walls. Most importantly, they use their platform of entertainment to preach the Gospel of Jesus Christ. 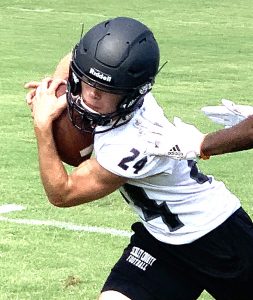 Schley County wide receiver Landon Dailey catches a pass near the sidelines during the FCA camp.
Photo by Ken Gustafson

Before Rev. Alford gave his speech, he invited a player to come up and try to rip up a phone book. Zykevious Walker volunteered and tried to do it, but was unsuccessful. Alford then took the phone book and was able to rip it in half. Alford went on to explain that there is a secret to ripping up a phone book and that there is a secret to having the strength to win in the game of life. “I guarantee you. If Zykevious knew the secret to ripping this phone book in half, he would be able to do it a lot easier than I can,” Alford said. “The real strength in my life is found in the fact the I have received Jesus Christ as my personal Lord and Savior. He’s been there for me through the tough times and the good times.” Alford went on to quote Psalm 25:14: “The secret of the Lord is with those who reverence Him.” 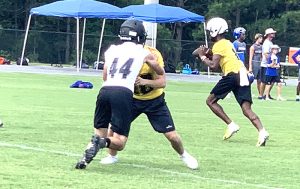 Schley County linebacker Carson Moore tries to get by his blocker during the Wildcats’ seven-on-seven game against Chattahoochee County.
Photo by Ken Gustafson

Alford went on to share his testimony about the circumstances that led to him receiving Christ as his personal savior when he was 12 years old. He then went on to describe how he had wanted to succeed in bodybuilding. “I had fallen in love with weights through football, so I started training with the weights and got bigger and stronger. I was trying to compete,” Alford said. 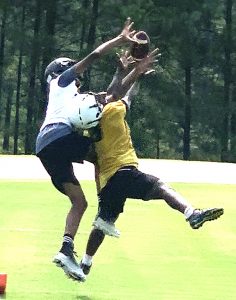 Schley County defensive back Clinton Jackson goes up to try to knock the ball away from a Chattahoochee County wide receiver during a seven-on-seven game.
Photo by Ken Gustafson

However, Alford went on to say that there was a group who came into his gym one day and tempted him to use steroids. Unfortunately, he fell prey to that temptation. “In life, we all make real mistakes. I made a real mistake that day,” Alford said. “These guys told me that if I would use steroids, then I could make it to the top in bodybuilding. I fell prey to that temptation because I was full of selfish ambitions. Instead of wanting to be a God pleaser, I wanted to be a man pleaser.”

Alford went on to tell the crowd that he won the Southeastern Bodybuilding Championship in 1993, thus qualifying for the national championships. Alford said that his success in Bodybuilding made him more prideful and arrogant, and that Bodybuilding became the number one thing in his life, even ahead of God and his family. According to Alford, this was the beginning of a downward spiral in his life. “My life started falling apart,” Alford said. “It got so bad that I went to compete in a competition and I came in fifth place. I thought I should have won it. When I got back home, I had a feeling of rejection because my identity as a weightlifter and a bodybuilder had been damaged.” 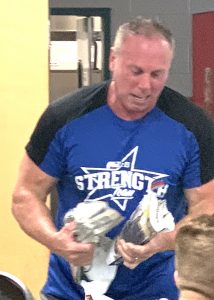 Rev. Warren Alford, a member of the Strength Team bodybuilding team, successfully rips a phone book in half with his bare hands.
Photo by Ken Gustafson

Alford went on to say that he tried to “drown his sorrows” by going out and drinking with his friends. “My life was at a bad place,” Alford said. “I was about to lose my marriage. I was about to lose my business.” However, after waking up one morning, Alford said he was flipping through the channels on the television and came across a preacher preaching a sermon. “Ill never forget when he pointed his finger into the television and said, ‘Have you been about your Father’s business?’ I knew right then and right there that I had not been about my Father’s business. I had been about Warren’s business. When I gave my life to Jesus when I was 12 years old, God had become my Father, but I had walked away from Him. Thank God, He had never walked away from me.”

Alford went on to say that he asked God that morning to forgive him for the way he had treated his wife, his family and to forgive him for using steroids. He then took the box of steroids he had and threw them into the trash bin outside what use to be the Piggly Wiggly store in Americus. “That day, I counted all of my selfish ambitions as rubbish and went after Jesus with all of my heart,” Alford said. “That was the biggest decision I had made in my life aside from giving my heart to Jesus as a 12-year-old boy.”

At the end of his message, Rev. Alford invited anyone in the room to accept Christ as their personal savior if they had never done so before. Those who prayed to receive Christ went over to the weight room for further counseling.

It was a day for four high school football teams to learn how to win at the game of football, but more importantly, they learned the secret to winning at the game of life.

AMERICUS – One of Sumter County’s top high school football players is on the verge of breaking a few school... read more