PANAMA CITY BEACH, FL – the Americus Travelers 14u Travel Baseball Team reeled off two straight victories and are off to a great start to their quest for a national championship at the 2019 Grand Slam World Series of Baseball at Frank Brown Park in Panama City Beach, FL.

On Monday, July 1, the Travelers began the tournament with a 5-1 win over the Cincinnati Patriots. The Travelers, who were the home team in this game, scored two runs in the bottom of the first inning to take an early 2-0 lead. Tripp Thomas led off the inning with a double. Jaxson Haire then knocked an RBI single into left field, scoring Thomas for the first run of the game. Thomas had already advanced to third base on a passed ball. Chase Ledger then reached on an error, allowing Haire to score the team’s second run.

In the bottom of the second inning, the Travelers added to their lead. Owen Lamb led off the frame with a single and then managed to steal both second and third base. Caden King then grounded into an RBI fielder’s choice, scoring Lamb from third and giving the Travelers a 3-0 lead.

After the Patriots scored one run in the top of the third, the Travelers responded with two more runs in their half of the inning. Thomas led off with a single to center field. Thomas then stole second and advanced to third on a passed ball. Haire then hit into an RBI fielder’s choice, scoring Thomas to give the Travelers a 4-1 lead. After Chase Ledger lined a double to left field, Thomas Willis singled to right field, allowing Ledger to score from second base. This would be all the scoring the Travelers needed in this game.

Caden King started on the mound for the Travelers. In three innings of work, King gave up one run, walked three and struck out five. Haire came on in relief of King and pitched the last three innings. He gave up no runs on four hits and struck out two batters.

Thomas and Ledger each went 2-for-3 in the game and Thomas scored two runs. Willis went 1-for-3 with an RBI and Landon Knight went 1-for-2 in the game. 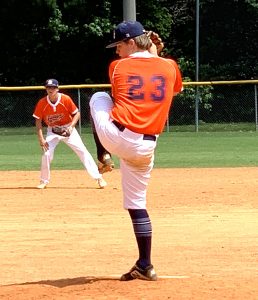 In their second game on Monday against the 14u Indiana Hurricanes from Brownsburg, IN, the Travelers exploded for two five-run innings, leading to a 14-1 win. They scored three runs in the top of the second inning to take a 3-0 lead. With the bases loaded and two outs, Thomas drew an RBI walk for the first run of the game. A pitch hit Jaxson Haire, allowing Peyton Tompkins to score. A balk was called against the Hurricanes’ pitcher, allowing Landon Knight to score for the Travelers’ third run of the game.

In the third inning, the Travelers exploded for five runs on three hits. They also took advantage of two errors committed by the Hurricanes, as well as a hit batsman. King, Thomas and Dylan Davis each had an RBI single in the inning.

After both teams scored a run in the fourth, the Travelers scored five more runs in the top of the fifth to put the game out of reach. Tompkins and Knight both singled to lead off the frame. After Thomas drew a walk, Haire belted an RBI single to right field, scoring Tompkins to make it 10-1 Travelers. Ledger then followed with a two-run single to increase their lead to 12-1. Both Willis and Davis drew walks, allowing another run to score. The Travelers got their final run of the game when Jack Clark drew an RBI walk. 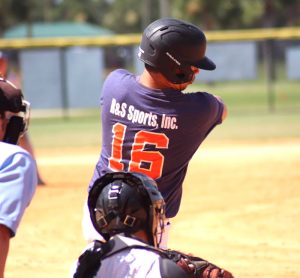 Jack Clark is at the plate for the Americus Travelers on Day 1 of the Grand Slam World Series of Baseball in Panama City Beach, FL. Clark went 2-for-4 with an RBI on the day.
Submitted Photo

Clark went 2-for-3 with an RBI to lead the Travelers’ offensive attack. Dylan Davis went 1-for-3, scored three runs and drove in an RBI.

Evans and Dowdell lead 14u Raptors to victory in DHBCBL play

AMERICUS – Cameron Evans and Devin Dowdell each scored in double figures to lead the 14u Raptors to a 55-30... read more