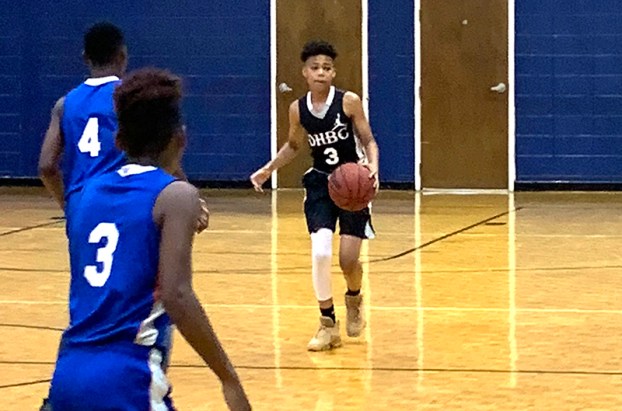 James White dribbles the ball up the court for the 14u Raptors. White scored the winning basket in overtime. Photo by Ken Gustafson

AMERICUS – As the season goes on, the games in the Dwight Harris Boys Club Basketball League (DHBCBL) continue to get more and more exciting with down-to-the-wire finishes. Monday night’s action was no exception as James White scored with four seconds left in overtime to give the 14u Raptors a 59-57 win over the 14u Thunder on the first day of July at Americus-Sumter County Ninth Grade Academy.

The Raptors had a large double-digit lead in this game, but the Thunder made a huge run in the second half to send the game into overtime.

“I knew they were going to come back,” 14u Raptors head coach Eric Hall said. “I just told our guys to keep executing, keep making easy shots, make the right passes and not force anything. They really did well. They pulled it out in the end. It was a hard-fought win.” 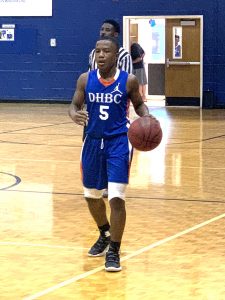 Point guard D.J. Hurley with the ball for the 14u Thunder. Hurley scored 21 points in the overtime loss.
Photo by Ken Gustafson

Three players were in double figures for the Raptors. Devin Dowdell led the team in scoring with 15 points. Kentravious Smith scored 13 and Tylek Luster scored 12 points in the winning cause. James White scored eight points, including the game-winning basket in overtime.

The Raptors could have won this game in regulation. They were leading 52-49 with time running down. However, just before the buzzer sounded, 14u Thunder guard D.J. Hurley gave a pump fake and faked out his defender. He then was able to get off a three-point attempt while being fouled. The referee called a foul on the shot, giving Hurley three shots with just 0.3 seconds left. Hurley made all three free throws and the game went into overtime with the score tied at 52-52. 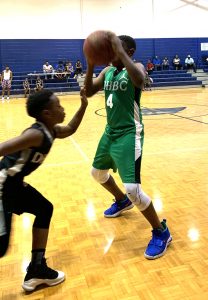 11u Bucks guard Austin Davis looks to pass. Davis scored 23 points to lead the Bucks to a 44-41 victory.
Photo by Ken Gustafson

In the overtime period, both teams traded baskets. However, with the score tied at 57-57 with about four seconds left, James White scored to give the Raptors the lead. The Thunder got off a desperation shot at the horn, but it was off the mark. The Raptors had escaped with a 59-57 overtime win.

Early on in the game, it didn’t look as if the game was going to be anywhere close to being the nail biter that it was. The Raptors jumped out to a 13-2 lead early in the first half. However, the Thunder outscored the Raptors 16-10 during the next several minutes. They cut the lead to 23-18 on a three-pointer by Jaseph Jordan with 5:13 left in the half. At that point, the Raptors called a time out.

Out of the timeout, the Raptors took control and went on a 10-0 run to regain their double-digit advantage at 33-18. 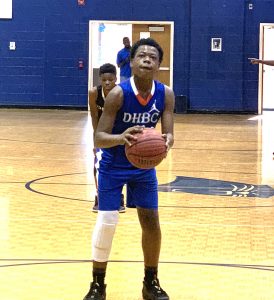 Quay Hurley is about to shoot a free throw for the 14u thunder. He scored eight points in the overtime loss to the Raptors.
Photo by Ken Gustafson

In the second half, however, the Thunder stormed back by outscoring the Raptors 19-10. This was capped off with a basket from Cedric Smith with under eight minutes to go, making the score 43-37 Raptors. With less than five minutes left in regulation, the Raptors maintained a 46-39 lead before Hurley scored to cut the lead to five. That was the beginning of a 4-0 run by the Thunder. However, Zyerre Williams nailed a three-pointer to put the Raptors back up by six at 49-43.

However, the Thunder would not go away. They scored six unanswered points, including a game-tying basket by Hurley. The game had all the makings of an overtime game or a game that would be won on the last shot.

With 24.6 seconds left, Tylek Luster scored for the Raptors and was fouled on the play. Luster made the free throw to give his team a 52-49 lead. All the Raptors needed to do was play solid defense without fouling. However, just before the horn sounded to end regulation, Hurley pump faked his defender and got off a desperation three-point shot. Hurley was fouled on the play and made all three free throws to send the game into overtime. 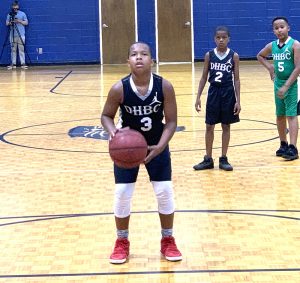 Briceton Terry is about to shoot a free throw for the 11u Raptors. Terry led his team in scoring with 15 points.
Photo by Ken Gustafson

Unfortunately for the Thunder, they were not able to pull out a miracle finish in the extra session and fell to the Raptors 59-57. Hurley led all scorers with 21 points for the Thunder. Cedric Smith was also in double figures, as he scored 16 points.

In other DHBCBL action on Monday, the 11u Bucks also won a close ball game by the score of 44-41 over the 11u Raptors. Austin Davis led the Bucks with 23 points and Le’Bron Brown chipped in eight. The 11u Raptors had three players in double figures. Briceton Terry led the Raptors with 15 points. Joshua Coleman scored 14 and Amari Hubbard chipped in 12 in the losing cause.