This shows the fire after it was greatly diminished by aggressive firefighting by members of Americus Fire & Emergency Services.

AMERICUS — Americus Fire & Emergency Services responded at 12:51 p.m. Saturday to a fire on the property of the Georgia Department of Transportation (GDOT), 1557 E. Lamar St. Heavy black smoke and orange flames could be seen leaping high into the sky by passers-by.

Upon arrival, they found a large pile of storm debris in flames behind a fence with a locked gate. They used bolt cutters to gain entry. They began their attack on the large blaze and also kept it from spreading to a nearby shed. Another engine responded from the neighborhood located off Cherokee Street. The cause of the fire is unknown.

A GDOT employee was contacted and once on site, suggested they use a loader to help in extinguishing the fire. The employee used the piece of equipment to spread the large pile and continued the process until the fire was out completely. 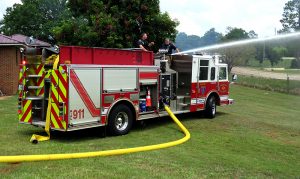 Firefighters with Americus Fire & Emergency Services used water from a hydrant to knock down the huge blaze.

Firefighters responded to the scene again shortly after 2:30 p.m. on Sunday to deal with the fire which had rekindled. They found a small area of rubbish burning and other smoldering areas. They extinguished those and searched for any other hot spots.

Shortly after 7 a.m. on Monday, firefighters responded again to the same location to a rekindling of the fire. On arrival, they found some smoldering material and smoke coming from the rubbish. They extinguished hot spots in the area.

According to the reports, there were some spots that couldn’t be reached so Public Works was called to bring in a backhoe to rearrange the rubbish. Firefighters continued to extinguish the hot spots and smoldering areas. They used the thermal imaging camera to make sure there were no more hot spots. No other hazards were found.