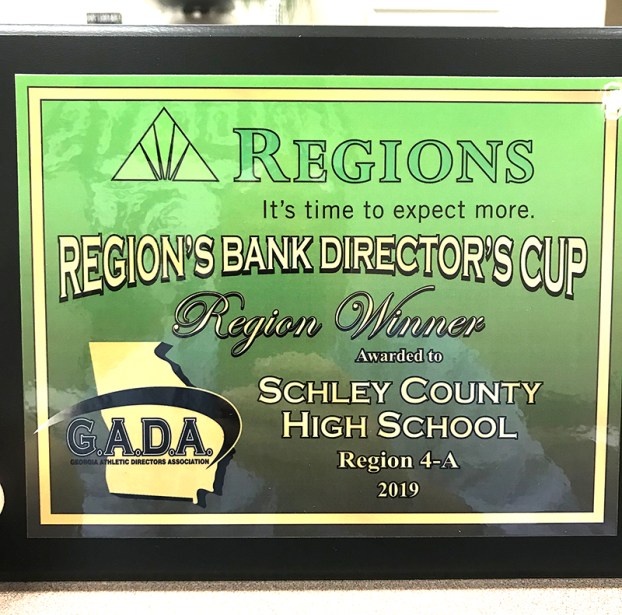 The Wildcats finished with a total of 745 points and beat out second-place finishers Brookstone, who had a total of 574 points.

The SC boys also finished first in the region with 402 points over Marion County’s 281 points. The SC girls finished in second place with 343 points, 28 points behind first-place finishers Brookstone, who finished with 371 points.

Boys team scores were broken down in this fashion: 90 points for Baseball, 85 points for Cross Country, 85 for Golf, 72 points for Track & Field and 70 for Football.

Girls team scores were broken down this way: 75 points for Competition Cheerleading, 72 for Track & Field, 72 for Golf, 70 for Softball and 54 for Cross Country.

“I am extremely proud of our coaches and athletes,” SC Athletic Director Gabe Theiss said. “It takes everyone working together to make this type of award happen. In a small school, we all have to pull on the same end of the rope because we share so many athletes between the programs in the school.”

Theiss went on to say that the teams who scored points toward this award are great examples of teams who work very hard to share athletes, while at the same time pushing their athletes to be the best they can be at their sport.

SC’s quest to not only defend their regional award, but to strive for the state award in their classification begins this fall when football, girls and boys cross country and girls softball all commence to kick off the 2019-2020 school year.

17u Bucks, 14u Thunder and 11u Warriors all roll in DHBCBL play

AMERICUS – From the start, the 17u Bucks took control early and dominated their way to a 72-48 thrashing of... read more