Willoughby pours in 34 to lead 17u Bucks to victory 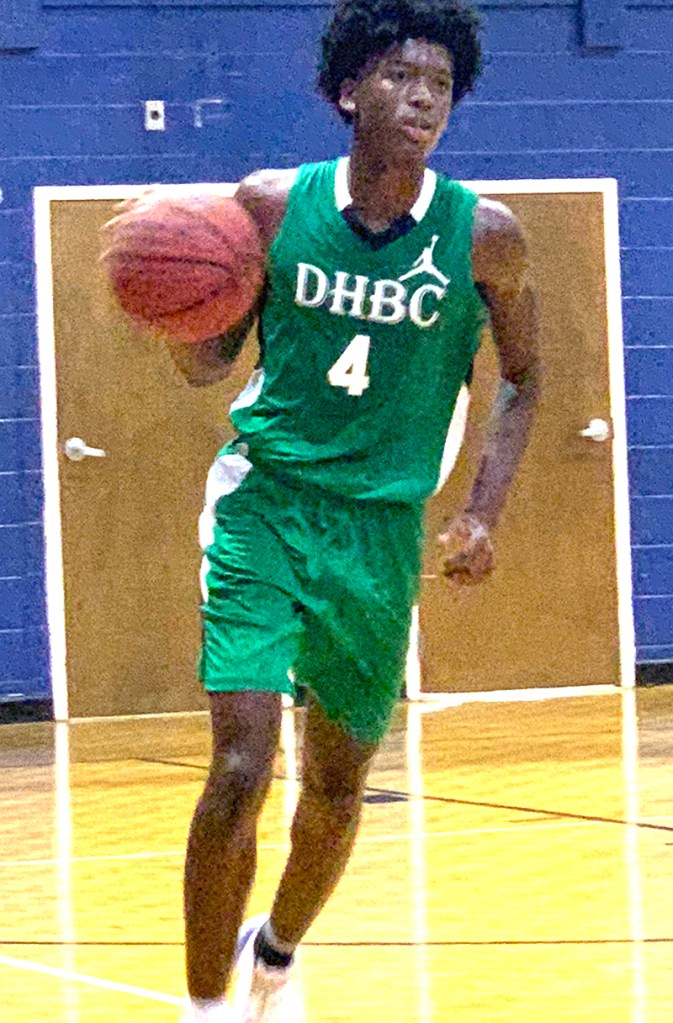 Kanova Willoughby scored 34 points to lead the 17u Bucks to a 59-55 victory over the 17u Rockets in DHBCBL action. Photo by Ken Gustafson

AMERICUS – Kanova Willoughby may have had his best game ever as a high school player when he poured in 34 points to lead the 17u Bucks to a 59-55 victory over the 17u Rockets in the Dwight Harris Boys Club Basketball League (DHBCBL) on Thursday, July 11, at Americus-Sumter County Ninth Grade Academy.

The game went down to the wire, as expected between two very talented and athletic teams. Both teams have players that play varsity basketball for local area high schools.

The game began with a player from each team hitting three-point shots. Melton McCoy, who plays his high school ball at Americus-Sumter (ASHS), knocked down a three-pointer to score the first basket of the game. Willoughby, who is McCoy’s high school teammate and the starting quarterback on the ASHS football team, responded in kind for the Bucks with a three-pointer of his own to tie the game. 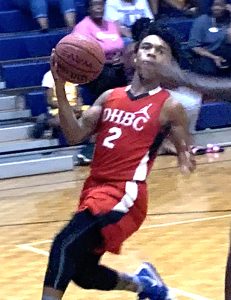 17u Rockets guard Melton McCoy drives to the basket for a layup.
Photo by Ken Gustafson

From then on, it was a back-and-forth affair between both teams. In the first half, each team scored on almost every possession, making it fitting that the game was tied at 32-32 at the half.

Willoughby scored 22 of his 34 points in the first half. Nine of those points came on three-pointers from beyond the arc. 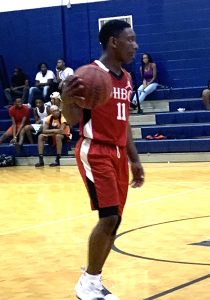 Anthony Tyson scored 27 points to lead the 14u Rockets to a 65-62 win over the 14u Thunder in DHBCBL action.
Photo by Ken Gustafson

The Bucks asserted themselves during the first few minutes of the second half by outscoring the Rockets 15-5 to take a 47-37 lead. The Bucks maintained at least a six-point lead for much of the second half until the Rockets cut the lead down to two when McCoy made two free throws with 45 seconds left. The Rockets had a chance to tie the game when McCoy drove to the basket with 26 seconds left. However, his shot was off the mark and Willoughby was fouled. Willoughby sank two free throws to seal the victory for the Bucks.

Willoughby’s other ASHS teammate, Trae Brown, chipped in 10 points for the Bucks in the winning cause.

The Rockets had three players score in double figures. McCoy and Zacheus Kendrick each scored 17 points to lead the Rockets and Quendarious Hightower scored 13 points in the losing cause. 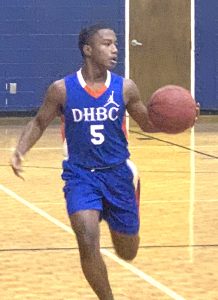 Quay Hurley led the 14u Thunder with 22 points in their loss to the 14u Rockets.
Photo by Ken Gustafson

In the 14u division, Anthony Tyson scored 27 points to lead the 14u Rockets to a hard-fought 65-62 victory over the 14u Thunder. The Rockets jumped out to a 25-12 lead in the first half, but the Thunder closed the gap by going on a 15-9 run to get to within seven at halftime.

Early in the second half, the Thunder went on a 4-0 run to cut their deficit to three. However, Tyson scored, was fouled and converted the three-point play to put the Rockets back up by six at 37-31. The Rockets made another big run in the second half to go back up by double digits. However, with the Rockets leading 64-52, the Thunder made one last attempt at a come-from-behind victory. They went on an 8-0 run, which was capped off by a three-pointer from D.J. Hurley with 20 seconds left. 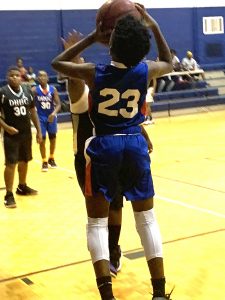 Javarious Scott shoots a three-pointer. Scott scored 12 points in the 11u Thunder’s loss to the Raptors.
Photo by Ken Gustafson

Tyquan Robinson and Cordera Leverett also scored in double figures for the Rockets. Robinson scored 14 points and Leverett chipped in 13. 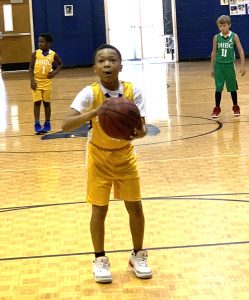 Chaston Green at the foul line shooting free throws. Green led the 8u Warriors with five points in their 15-11 win over the Bucks.
Photo by Ken Gustafson

In the 11u division, the 11u Raptors jumped out to a 33-16 lead at the half and dominated from then on to earn a 54-25 win over the 11u Thunder. The Raptors had three players score in double figures. Amari Hubbard led all scorers with 19 points and Briceton Terry had 18. Joshua Coleman also chipped in 11 points in the winning effort. The Thunder squad was led in scoring by Javarious Scott’s 12 points. 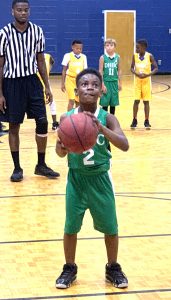 Jamarion Pride at the foul line shooting free throws. Pride led the 8u Bucks with six points in their 15-11 loss to the Warriors.
Photo by Ken Gustafson

In the 8u division, it was a close, hard-fought game between the 8u Bucks and the 8u Warriors. However, the Warriors ended up coming out on top 15-11. Chaston Green led the Warriors in scoring with five points and Jordan Holloway had four. Malik Paul, Ayden Arnett and Jaydin Galloway each scored two points to round out the Warriors’ scoring.