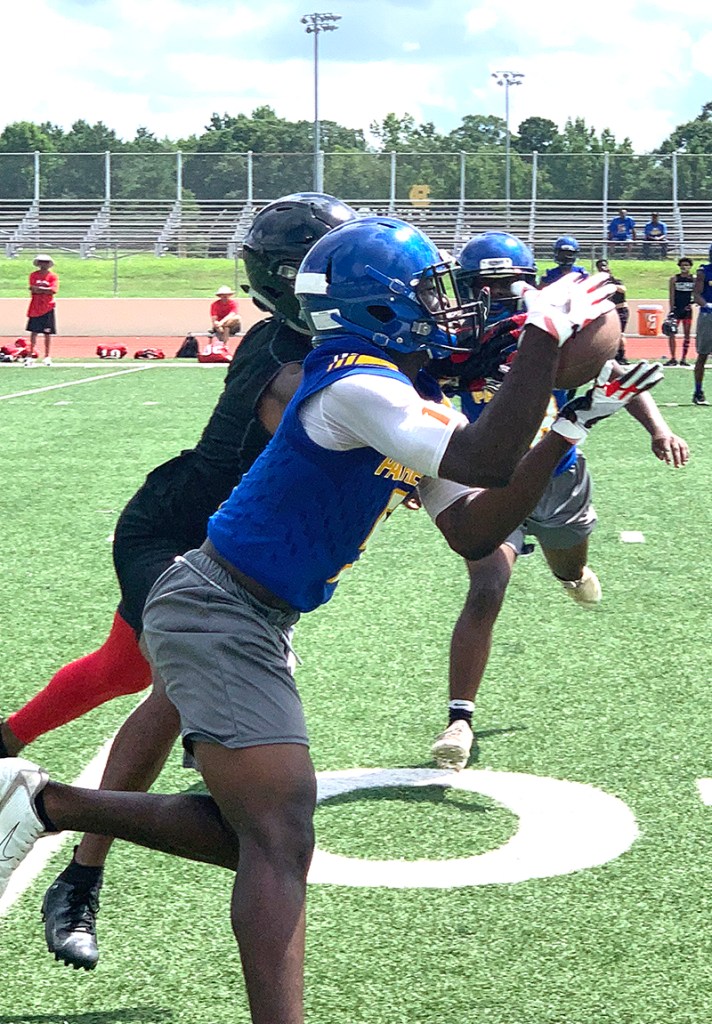 It was a time for the Panthers, along with the teams from the other three schools, to get use to hitting with pads and to get ready for what their upcoming football seasons will bring.

“It allows you to do more with your run game. It lets you see some physicality that you haven’t seen since spring and just clean some things up in the box,” ASHS head coach Ross Couch said. As far as Couch was concerned, he was pleased with how his club competed, but he knows that the team still has much work to be done before the season starts, particularly in the trenches. 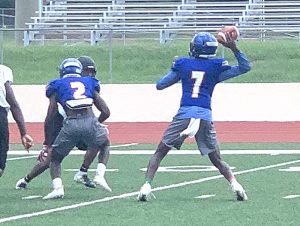 ASHS senior quarterback Kanova Willoughby is back to throw during a seven-on-seven passing drill against Harris County.
Photo by Ken Gustafson

To begin the camp, the Panthers worked on their running game. They then worked on just the passing game. Near the end, they mixed it up with their full team.

There was also a period during the camp in which the wide receivers and defensive backs worked by themselves in seven-on-seven drills against HC, while the offensive and defensive lines worked on blocking drills. 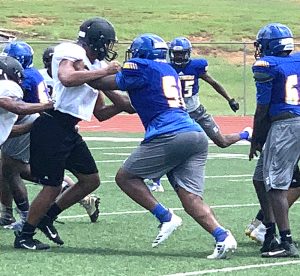 ASHS starting quarterback Kanova Willoughby was pleased with not only his performance, but also that of the offensive and defensive lines and the wide receiving corps. “I did good. The O-line was blocking good. The receivers were catching good,” Willoughby said. “The defense got some good stops. We just have to fill the holes better.”

For the young freshmen on the team, this was a good opportunity to see and experience the type of scenario that they will experience in a real varsity football game. Being that this camp was conducted during the intense summer heat, it also taught them the importance of persevering and pushing through it. That fact was not lost on freshman offensive lineman Donovan Hunt. “I’m doing all right. It’s hot and physical out here,” Hunt said. “You know you’ve got to do your best. You got other players who are coming here. You come here to be your best.” 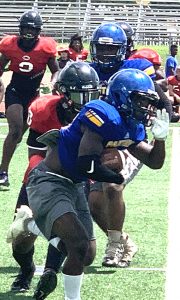 Junior running back Christian Waymon fights for yardage during a scrimmage against Calloway at the Harris County contact camp.
Photo by Ken Gustafson

Senior wide Receiver Quevoluia Willoughby believes that the contact camp at HC has given his team the opportunity to get physical and to be ready for the regular season by practicing in pads. The Georgia High School Association (GHSA) has strict guidelines on when teams can have full-contact practices in pads during the off-season. Willoughby did not participate because he is recovering from a groin injury, but based on what he observed at the camp and what he has seen during the summer, the team is going to be better this year. “It looks like our team is going to be better and more disciplined than last year,” Willoughby said. “Now that we’re playing with each other and we know a whole bunch about each other, we have chemistry with each other. I feel like the season is going to go better than it was last year.” Willoughby went on to say that 20 seniors are back this year and that six defensive starters are back from last year’s squad, as well as seven starters on offense. “We’re going to teach the young people how the game works so they can get use to it,” Willoughby said. 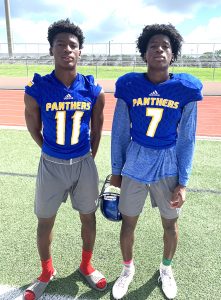 In addition to the wide receivers, linebackers and defensive backs getting valuable work at the camp, the offensive line also got reacquainted to what it is like to hit somebody up close. While there is still much work to be done, offensive line coach Kentrell Mercer was pleased with how his guys performed during the camp, as well as their progress during the summer. “We’re finally being able to get contact against another team,” Mercer said. “We’ll see how we will shape up early in the season. We’re testing our physicality and they’re being a little physical today, but I’ve been looking for how they gel together as a team and how they communicate. We still have a lot to work on. We’ve got a lot of young guys and a lot of inexperience, so we’re just trying to give them a little experience with contact against somebody else. They’re great kids. We’ve got a good bit of size out here. It’s shaping up pretty good.” 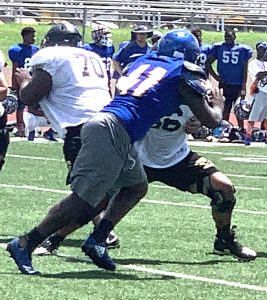 While the offensive and defensive lines worked on their skills, the wide receivers and cornerbacks worked on their craft during the seven-on-seven sessions. While the Panthers were on defense against HC, senior defensive back Lemario Larry earned himself an interception. For Larry, the contact camp was a good way for him and his team to improve. Overall, he was pleased with his personal progress, as well as that of his teammates. “I think we’re doing very well,” Larry said. “I think we’re standing up and holding our own. We’re getting good contact, getting good licks and stopping on the whistle. I think it will help us communicate as a team and talk on the field and get everything done and do our job.” 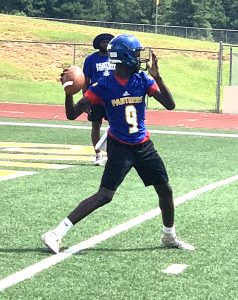 The summer workouts will continue all the way into fall practice, which begins on Thursday, July 25. The first day for practicing in pads will be on Thursday, August 1. The Panthers will host a scrimmage game against Dooly County on Friday, August 9, at 7:30 p.m.

The Panthers will begin the 2019 season on Friday, August 23, with a home game against Crisp County. Kickoff is scheduled for 7:30 p.m.