Champions are crowned on Championship Saturday 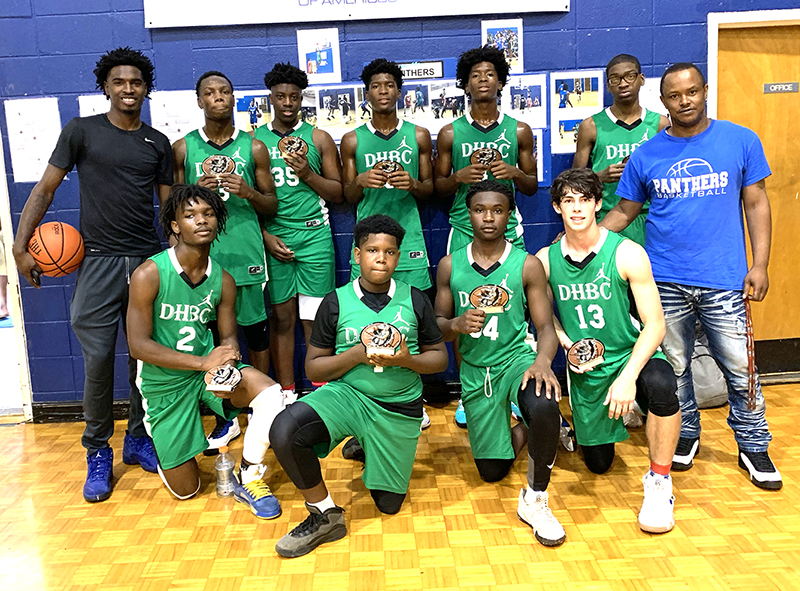 It was a fitting end to an exciting summer of DHBCBL basketball.

The day began with the 8u division championship between the Bucks and the Warriors. Ayden Arnett and Chaston Green each scored seven points to lead the Warriors to a 23-18 victory and the 8u division championship. Malik Paul scored four points, Ryan Peck scored three and Jaydin Galloway scored two points to round out the Warriors’ scoring. Elijah Fuller led the Bucks with 10 points. Kyle Robinson scored six and Jamarion Pride scored two points in the losing cause. 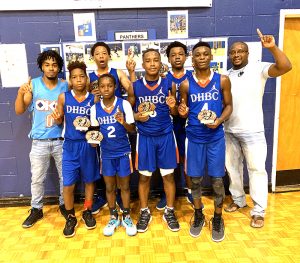 The 11u division championship featured the 11u Thunder against the 11u Bucks. The Thunder had a 20-14 lead in the first half until the Bucks went on a 6-0 run to tie the game. Ishmael Jones capped off that run with a basket. Near the end of the half, Javarious Scott scored to give the Thunder a 22-20 halftime lead.

However, with the Bucks trailing 34-33 midway through the second half, Jones scored five unanswered points, including a three-pointer, to give the Bucks a 38-34 lead. That proved to be the turning point of the game. The Bucks would never again relinquish their lead and they went on to win 42-35 to claim the 11u division championship. 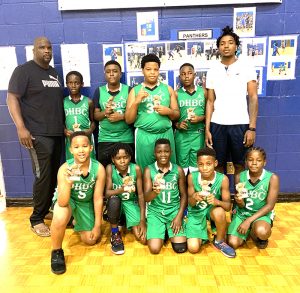 Omari Woodard led the 11u Thunder in scoring with 23 points. Scott scored 10 points and Kendall Thomas scored two points to round out the Thunder’s scoring. 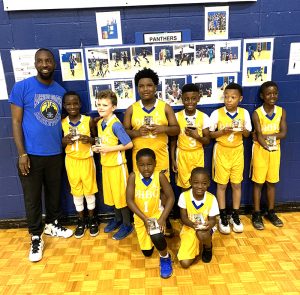 The first half was a back-and-forth affair between the two teams, but the Thunder went into halftime with a 28-27 lead. Hurley scored 20 of his 36 points in the first half.

However, Hurley and his teammates were able to assert themselves in the second half. As a result, the Thunder ended up claiming the title. 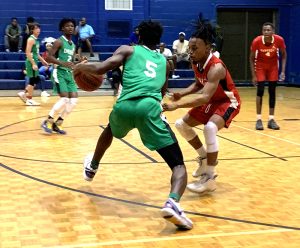 Quevoluia Willoughby with the ball for the 17u Bucks. Willoughby scored 18 points against the 17u Rockets in the championship game.
Photo by Ken Gustafson 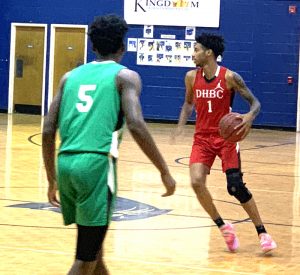 17u Rockets guard Shomari Gaines (1) led the 17u Rockets with 17 points in their loss to the Bucks.
Photo by Ken Gustafson

The Rockets outscored the Bucks 21-12 the rest of the way, but it would not be enough as the Bucks held on to win 54-44 to claim their championship. 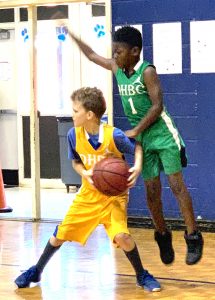 Ryan Peck of the 8u Warriors looks to pass.
Photo by Ken Gustafson

Shomari Gaines led the 17u Rockets in scoring with 14 points and Daquan Brown had 10. Melton McCoy scored eight points. Zacheus Kendrick had seven. Quendarious Hightower scored three points and Pete Banks chipped in two points in the losing cause.

On Friday, July 19, there was a three-point shooting contest amongst the top three-point shooters from each division, as well as a slam-dunk contest for players in the 14u and 17u divisions. 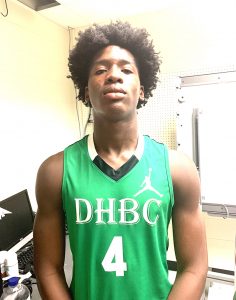 Kanova Willoughby won the DHBCBL slam-dunk contest for the 17u division.
Photo by Ken Gustafson

Kanova Willoughby was the winner of the slam-dunk competition. Willoughby competed against his twin brother Quevoluia and Shomari Gaines. On his first dunk, Willoughby tried a self-ally, one-handed tomahawk dunk and missed it. However, he was able to make his second dunk. “In the second go-round and the third round, I did a two-handed self-ally,” Willoughby said. According to Willoughby, Gaines tried an ally-oop, one-handed dunk off the backboard and missed it. His brother Quevoluia missed both of his dunk attempts, meaning that either Willoughby or Gaines would be the winner. 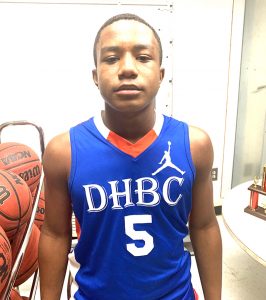 14u Thunder guard D.J. Hurley won the three-point contest for the 14u division.
Photo by Ken Gustafson

Both contestants got one dunk attempt each. Gaines went first and tried a windmill backwards dunk and missed. All Willoughby needed to do to win was nail his dunk attempt. “I came with a self-ally wind mill and I made mine,” Willoughby said. 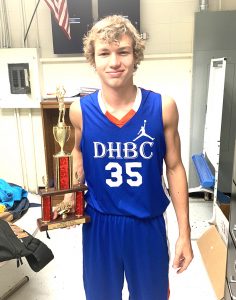 Max Foster III, a member of the 17u Thunder team, won the three-point shooting competition in the 17u division. In this contest, there were only two rounds of competition. 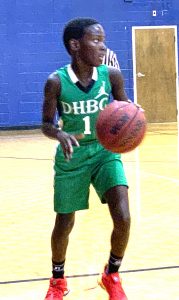 Travian Jordan dribbles the ball for the 11u Bucks in the championship game against the 11u Thunder.
Photo by Ken Gustafson

Foster and Le’Shannon Ross of the 17u Raptors team made it to the finals. “I made 15 in the qualifying round and 19 in the championship round,” Foster said. Foster is also a member of the Southland Academy Raiders basketball team and plays for his father, head coach Rundy Foster.

While some of these players will be playing youth and high school football this fall, it can be safely assumed that all of them will be playing either youth or high school basketball in the winter. The skills that they have developed while playing in the DHBCBL should serve all of them well during the school year. A year from now, most of them will be back for another exciting summer season of DHBCBL basketball.