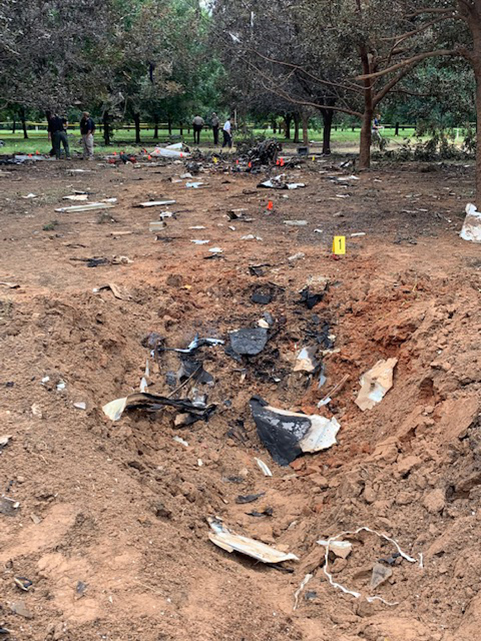 A portion of the debris field at the plane crash site about a mile north of Jimmy Carter Regional Airport.

Heidi Kemner, an air safety investigator with the National Transportation Safety Board (NTSB) in Virginia, gave a brief overview of the investigation. She said all the debris from the wreckage of the single-engine aircraft was being collected and moved to another location for analysis. She said her report should be complete and made public within 10 days.

Kemner said her office is working with the Sumter County Coroner’s Office to identify the remains. Sumter County Chief Deputy Col. Eric Bryant said the Georgia Bureau of Investigation Region 3 Office, which is also working on the crash, said that process could still take about one to one and half weeks. Bryant said the plane was registered as owned by Edd Anthony of Americus.

“Meanwhile,” Bryant said, “the Cochran and

Anthony families feel certain it is their loved ones and are making funeral arrangements.” That would be Mike Cochran and Edd Anthony, pilot of the plane, who were enroute to Wisconsin to attend the Oshkosh Air Show. Cochran’s celebration of life is schedule for 11 a.m. Saturday, July 27 at Central Baptist Church. Arrangements for Anthony were incomplete as of press time Friday.

The NTSB is also in charge of the wreckage clean-up, according to Bryant, and the property was turned back over to the property owner by the end of day on Thursday.

Bryant said a resident in the area of the crash had advised authorities that they had heard a loud explosion between 5:30 to 5:45 a.m. Wednesday. The wreckage was found some time after 9 a.m. by workers on the pecan farm and first responders were notified at 9:30 a.m.