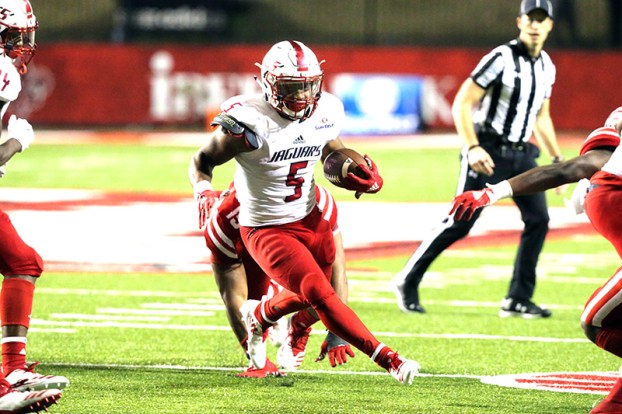 Former Schley County High School and current University of South Alabama football player Tra Minter has established himself as one of the most versatile NCAA Division 1 college football players in the country. He is a preseason candidate for the Paul Hornung Award. Photo by Scott Donaldson South Alabama Strategic Communications

MOBILE, AL – Former Schley County High School (SCHS) standout and current University of South Alabama senior running back Tra Minter has been working his way towards greatness ever since he graduated from SCHS back in 2015. According to the university’s athletics website, www.usajaguars.com, Minter has been named by the Louisville Sports Commission as a preseason candidate for the Paul Hornung Award. The award is named after former NFL Hall-of-Famer Paul Hornung, who was a star player for both the University of Notre Dame and the Green Bay Packers. According to Wikipedia.com, the award is given to the player who best demonstrates versatile, high-level performance in major college football.

AS a senior at SCHS in 2014, Minter was the top running back in the state of Georgia in all classifications. He rushed for 2,456 yards and tallied 106 tackles as a linebacker. In spite of his efforts, the Wildcats did not make the playoffs that year. While in high school, Minter participated in the All-American Bowl in Houston, TX and the Rising Senior Bowl in Atlanta.

Coming out of high school, Rivals.com listed him as a two-star athlete, but in spite of his tremendous success on the field, very few of the “big name” schools expressed interest in him. 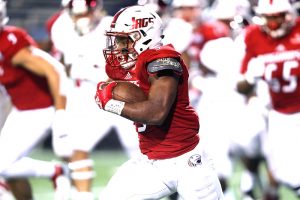 Tra Minter seen here running the ball against the University of Troy. In 2018, Minter led the Jaguars in rushing with 801 yards on 183 carries.
Photo by Scott Donaldson
South Alabama Strategic Communications

Minter decided to begin his college football career at Garden City Community College (GCCC) in Garden City, KS. Back in 2015, Minter told the Americus Times-Recorder his reasoning for going to junior college to begin his college football career. “I chose to attend Garden City Community College because they have a very good football program,” Minter said. “They help their players enhance their skills on the field and a lot of their players move on to Division 1 schools. Many of their players have gone on to play in the NFL. This is part of the reason that I chose to go to a junior college before transferring to a larger school.”

The decision to go to junior college paid off for Minter. While at GCCC, Minter rushed for 1,255 yards on 291 carries and scored 10 touchdowns to help lead the Broncbusters to the National Junior College Athletic Association (NJCAA) national championship in 2015. Minter also led GCCC with 1,293 all-purpose yards after adding five catches for 38 yards. For his efforts, Minter earned second-team All-America honors. Minter was ranked second in the nation in rushing yards, sixth in yards per game and 11th in rushing touchdowns. 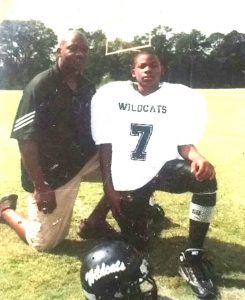 This is a picture of Tra Minter as a youngster when he was playing rec ball. To the left is his father and rec league coach, Thomas Minter.
Submitted Photo

In 2017, Minter transferred to the University of South Alabama, where he would begin his assent to becoming one of the best players in the Sun Belt Conference. According to usajaguars.com, during his sophomore season, Minter played in 12 games and finished second on the team with 341 rushing yards on 107 carries and scored one rushing touchdown. He also became the first Jaguar running back to catch more than 20 passes in a season, finishing the 2017 season with 22 catches for 247 yards and one touchdown reception. Minter was third on the team with 676 all-purpose yards and led the team with 123 all-purpose yards in a 19-14 loss to Louisiana.

On the ground, Minter got the job done for the Jaguars. He led the team in rushing with 801 yards on 183 carries. He also ran back 29 kickoffs for 701 yards and returned six punts for another 91 yards. Minter had nine games in 2018 in which he tallied 100 or more all-purpose yards. On three of those occasions, he surpassed 200 all-purpose yards.

Going into his senior season, in addition to being on the watch list for the Paul Hornung Award, Minter will be expected to be the top running back for the Jaguars and the team’s top punt returner. He has been named second-team preseason All-American as an athlete by the Sporting News and has earned preseason all-Sun Belt Conference honors by Phil Steele Publications as a kickoff returner, punt returner and running back.

Ever since he graduated from SCHS four years ago, Minter has shown himself to be one of the more versatile players in NCAA Division 1 College Football. If he continues on the current track that he’s on and has a strong senior campaign, he will no doubt attract the interest of NFL scouts if he hasn’t already. In a couple of years, SCHS and the city of Ellaville may very well have its first ever NFL product in Tra Minter.

The Jaguars begin their 2019 season with a difficult road game at Nebraska on Saturday, August 31, at 12 p.m. EST. Their first home game will be on Saturday, September 7, against Jackson State. Kickoff is scheduled for 7 p.m. EST.