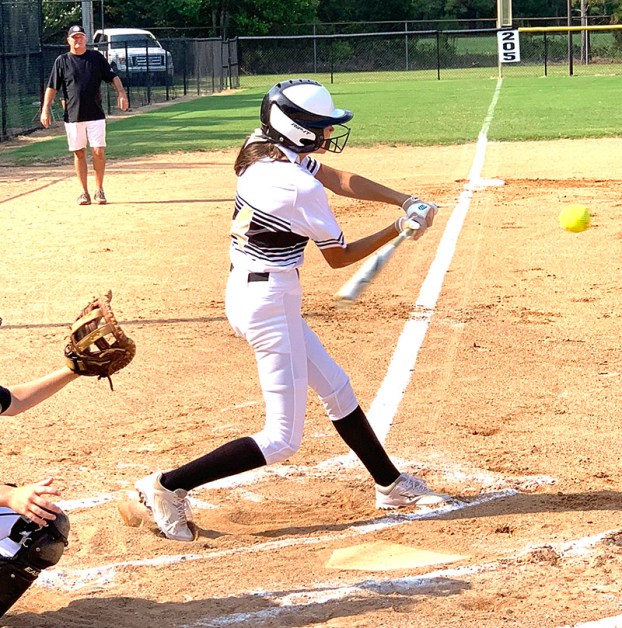 “We did some good things on the field and at the plate today, but we also did some things that we know we can get better at,” SA head coach Rusty Tondee said. “Our bats were a little behind today, but that is common in the early part of anyone’s schedule and it was also against some pretty good pitching.”

However, the Lady Raiders responded in the top of the third inning. Morgan Minick led off with a single and both Morgan Weaver and Abby Lightner drew walks to load the bases. Alli Dent then hit into a 6-4-3 double play, but Minick scored on the play to cut the SA deficit to 5-1. Holly McCain then belted a two-run home run over the left center field fence to bring the Lady Raiders closer at 5-3. With two outs, SA was still not done. Sara Beth Storey then knocked an RBI double over the head of the War Eagles’ center fielder. This scored courtesy runner Jadie Burrell, bringing SA to within one run at 5-4. 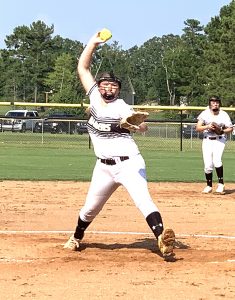 Southland Academy starting pitcher Rylan Youngdale seen here in a preseason game against Stratford Academy. Youngdale struck out a total of eight hitters in the two games she pitched in the TCS-Dublin Tournament.
ATR Archive

However, the War Eagles responded with three more runs. They scored three runs on three hits and took advantage of two errors committed by the Lady Raiders to take an 8-4 lead. That would end up being the final score as SA could only notch three more hits over the next four innings.

Storey and Minick led the Lady Raiders with two hits each and McCain tallied her first home run of the season. SA starting pitcher Rylan Youngdale took the loss. Youngdale pitched six innings and gave up four earned runs. She walked one batter and struck out two.

In Game 2, the Lady Raiders took on a very familiar foe: the Panthers of Tiftarea Academy (TA). Both teams are in GISA Region 3 AAA. In this game, the Lady Raiders struggled to figure out TA starting pitcher McKenna McCard. McCard was dominant on the mound, striking out the first six and seven of the first nine batters she faced. TA got on the board first in the third inning when Sara Beth Royal drove in a run on an RBI single. The Panthers scored four more runs in the fourth inning to take a 5-0 lead.

The Panthers were not done as they scored three more runs to take a 7-0 lead. SA got on the board in the top of the seventh when Minick doubled to left center field. Sara Beth Storey then singled to right field, scoring Minick to give the Lady Raiders their only run of the game in a 7-1 loss.

Alli Dent took the loss for SA. Dent pitched six innings and struck out six batters, but walked five, along with giving up six earned runs.

The final game of the day for the Lady Raiders was against the host team: Trinity Christian School (TCS). The Crusaders ended up winning 4-2 in a hard-fought contest between both teams.

With one out in the bottom of the first inning, SA starting pitcher Rylan Youngdale hit TCS catcher Sunni Wages. This was followed by a walk and an infield single to load the bases for Audrey Bryan. Youngdale got Bryan to hit into a fielder’s choice, but Macy Canady belted a two-run double with two outs to give the Crusaders an early 2-0 lead.

The Lady Raiders scored their first run of the game in the top of the third inning with one out. Alli Dent doubled to left field and scored on an error by the TCS second baseman. SA would later tie the game in the top of the sixth inning when Storey doubled and Holly McCain drew a walk. Courtesy runner Jadie Burrell then scored on another TCS error.

However, the Crusaders responded by scoring two runs in the bottom of the sixth inning to take a 4-2 lead. The Lady Raiders were unable to rally in the top of the seventh inning and fell to TCS 4-2.

Storey led the Lady Raiders with two hits. Both Brookland Weaver and Alli Dent contributed one hit each.

Youngdale took her second loss of the year. She pitched six innings and struck out six batters. However, she walked three, hit two batters and gave up four earned runs. In spite of the rough start to the season, Tondee is confident that his club will bounce back.

“It’s early in the season and I know our girls and they will work even harder to get to their own expected level of play. They are a committed group with a focus on being the best they can be,” Tondee said. “We will go back to practice, work hard, stay focused and get better.”

The Lady Raiders will try to earn their first win of the season when they travel to Camilla on Thursday, August 8, to take on the Westwood School. First pitch is scheduled for 4:30 p.m. On Saturday, August 10, SA will play in a tournament at the Georgia Southwestern State University softball complex. Their first game will be against Southwest Georgia Academy at 10:30 a.m., followed by a game at 2:30 p.m. against Westfield. The Lady Raiders’ first home game of the season will be on Thursday, August 15, against Westwood. First pitch is scheduled for 4 p.m.

AMERICUS – They’ve been training all summer. They’ve been running in the sweltering heat and humidity in preparation for the... read more