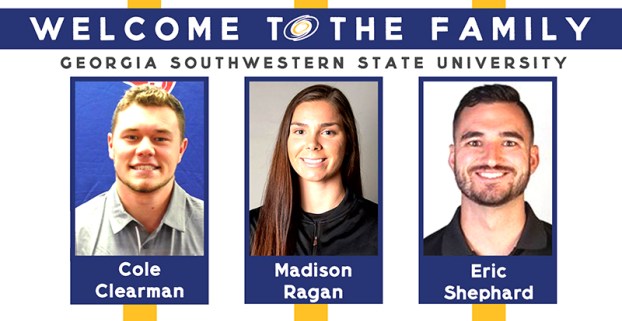 Clearman comes to GSW from Oklahoma Panhandle State University, an NCAA Division II school in Goodwell, OK. While at OPSU, Clearman served as the men’s assistant basketball coach under Coombs, who was the men’s head basketball coach at OPSU during the 2018-19 season. Both Coombs and Clearman guided the Aggies to a 16-14 record and earned the program’s first conference playoff berth since the 2005-06 season. During his playing career, Clearman was a four-year letter winner at Missouri Western from 2014-18.

Madison Ragan comes to GSW from Andrew College in Cuthbert, GA, where she served as the assistant softball coach. Ragan will serve in that same capacity in the GSW softball program. A native of Coleman, GA, Ragan was drafted to play professional softball in the first American Softball Association (ASBA) draft in 2018 by Team Outkast, who won the regular season championship. While playing in the ASBA, Ragan was the 2018 leader in games finished in the circle with a 1.043 slugging percentage and hit five home runs.

Ragan played college softball at Jacksonville University in Jacksonville, FL, where she was selected to the All-ASUN First Team in 2017. She led the Lady Dolphins in doubles and had the team’s top batting average (.346) her senior year. Prior to attending JU, Ragan went to Chipola College in Marianna, FL. While at CC, Ragan was a two-time First Team All-Panhandle selection and was also named as a First Team All-State selection as an At-Large player. Ragan is second in CC history in home runs and recorded the nation’s lowest ERA during her freshman year.

Ragan graduated from Jacksonville University with a Bachelor’s degree in Social Sciences and a minor in Marketing and Criminal Justice.

Shepherd was a three-year letter winner with the River Hawks and was named to the 2013 All-MIAA Honorable Mention Team as he played in 22 matches with 15 starts in goal. Shepherd recorded a career record of 10-3-4 and owns a career 1.04 goals against average, along with a .759 saving percentage. Shepherd ended his career with 63 saves, while only allowing 20 goals in 1,726:35 minutes played.

Shepherd was the winning goalkeeper for NSU in the 2012 Round of 16. It was the first victory in NSU’s history in the NCAA Championship.

As I’m sure you are well aware of, we live in a “win at all costs” world these days. People... read more