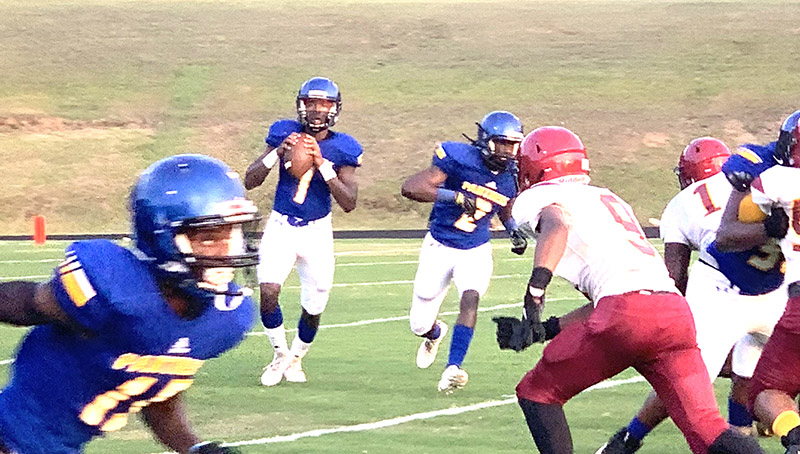 Americus-Sumter quarterback Kanova Willoughby threw for two touchdowns and ran for one to lead the Panthers to a 47-7 win in a preseason scrimmage against Dooly County. Photo by Ken Gustafson

AMERICUS – They’ve been practicing, working out and hitting all summer long, mostly against each other. Finally, the Americus-Sumter football team got a chance to demonstrate their growth and progress over the off-season when they hosted a preseason scrimmage against the Bobcats of Dooly County on Friday, August 9, at Alton Shell Stadium. It was the last time to work out the kinks in a game-like situation before the season opener against Crisp County on Friday, August 23.

Fortunately for the Panthers, they were able to capitalize on turnovers forced by their defense and won the scrimmage by the score of 47-7. ASHS running back Jarod Lewis scored three rushing touchdowns on the night to lead the Panthers to victory.

It was a dominating performance on both sides of the ball by the Panthers.

“I think we played very fast, which was a key point that we made during this game,” ASHS head coach Ross Couch said. “If we screw up, we’ll screw up going 100 miles and hour. I think that on both sides of the ball, our tempo was good. We’ve got to clean up our technique, especially with changing personnel out on both sides of the ball. That was not very well organized. That’s on me. I’ll get that fixed. Overall, I liked the effort and intensity. Obviously the result was pretty good. 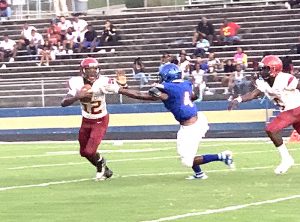 Before the game began, there was a moment of silence to honor the late Alton Shell, who passed away Thursday morning due to complications following a stroke a week ago. Shell led Americus High School to two state championships during the 1974 and 1975 seasons as the head football coach.

The Panthers got the ball to start the game. They were able to move the ball all the way down close to the DC five-yard line and were ready to score. However, a bad snap over quarterback Kanova Willoughby’s head resulted in a fumble recovery for the Bobcats. Fortunately for the Panthers, they were able to hold DC and get the ball back. 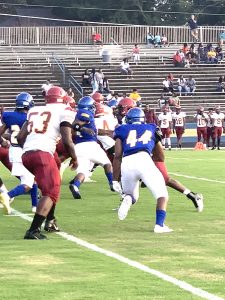 On their next possession, the Panthers moved the ball all the way down to the DC 11-yard line. On the next play, Willoughby threw a short touchdown pass to Michael Johnson with a little under six minutes left in the first quarter. The extra point was good, and the Panthers owned a 7-0 lead.

The Bobcats were able to move the ball down inside the ASHS 20-yard line. However, the Panthers got an interception near the end zone, forcing a turnover. 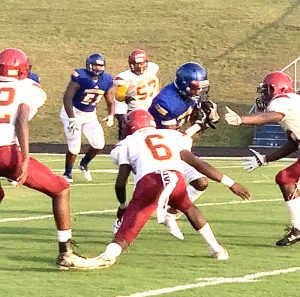 The Bobcats would later move the ball all the way down to the ASHS two-yard line. However, the Panthers forced a fumble and recovered their second turnover of the game. With about three minutes left in the half, the Panthers struck for a big play. The Panthers had the ball on their own 23-yard line. Willoughby threw a short pass to Johnson, who broke through the DC secondary and scampered 77 yards for his second touchdown of the game. There was a penalty on the play, but it was against the Bobcats. The extra point by Alexis Vasquez was good, and ASHS led 14-0 with a little over two minutes left in the first half.

The Panther defense got another stop and got the ball back for the offense. Willoughby and his mates responded by orchestrating a drive down inside the DC 10-yard line. On first and goal, Willoughby rolled to his left and scored on a quarterback keeper. The extra point was good, and the Panthers found themselves up 21-0 at halftime.

Throughout the game, the Panther defense made plays and gave the offense opportunities to score. They forced at least four turnovers on the night. Early in the second half, one of those turnovers was a fumble recovery, as defensive lineman Quindarius Walker was able to recover the fumble. 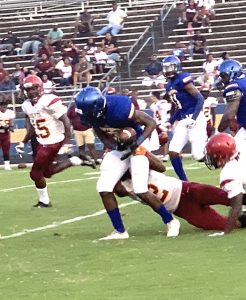 The Panthers took advantage by marching down the field and scoring another touchdown. Lewis ran it in for the first of his three touchdowns on the night.

The ASHS defense came up with another turnover later in the third quarter as Trevian Thomas came up with an interception. The Panther offense responded by driving the ball down into the red zone once again. Lewis would later score the second of his three touchdowns to give the Panthers a 35-0 lead.

The Panthers were still not done, however. The defense was able to stop DC once again and got the ball back. On their next possession, ASHS moved the ball down inside the 10-yard line. Lewis would then score the third of his three rushing touchdowns from 10 yards out to put the Panthers up 41-0. 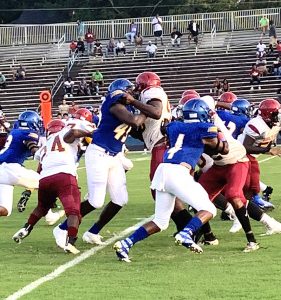 Defensive lineman Darion Mitchell (43) and defensive back Bradley Perry Jr. (4) are both trying to shed their blocks.
Photo by Ken Gustafson

The varsity team played during the first three quarters. The fourth quarter was dedicated to getting the junior varsity players some experience. During this portion of the game, each team scored a touchdown.

The Panthers will now spend the next two weeks preparing for their season opener against Crisp County in the annual “Battle of the Flint” on Friday, August 23.

Kickoff from Alton Shell Stadium is set for 7:30 p.m.