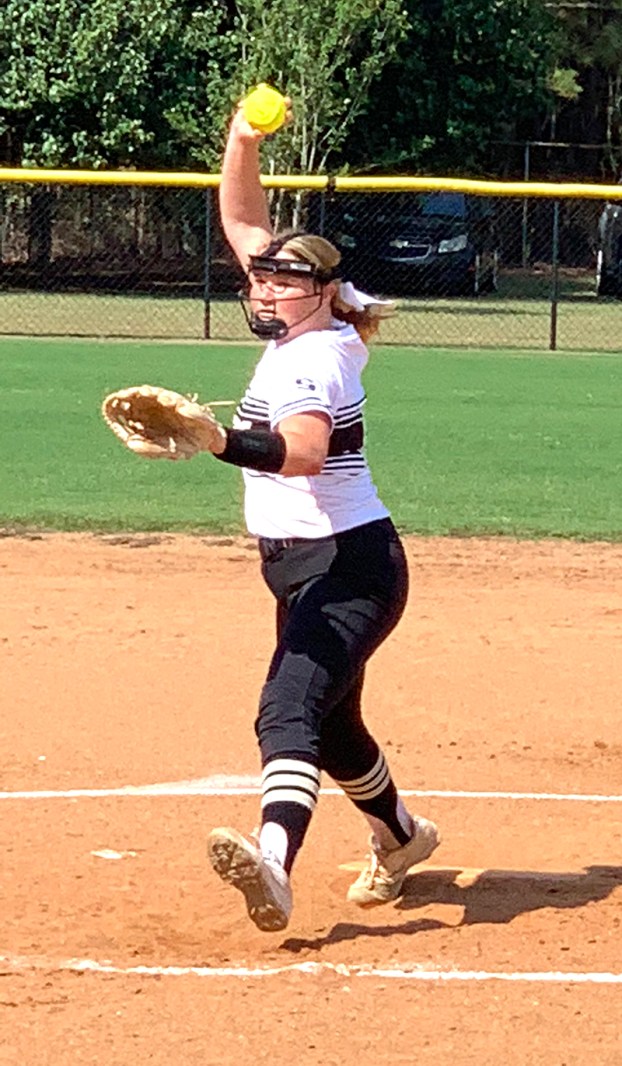 Southland Academy starting pitcher Rylan Youngdale struck out five batters and gave up one run to lead the Raiders to a 9-1 win over Westwood. Photo by Ken Gustafson

AMERICUS – The Southland Academy (SA) Raider softball team (3-4) got multiple hits from several players and defeated the Wildcats of Westwood 9-1 in the team’s first home game of the season on Thursday, August 15.

With the win, the Raiders sweep the season series between the two teams. SA defeated the Wildcats 4-1 in Camilla on Wednesday, August 7.

In addition to the Raiders’ offensive output from the plate, SA starting pitcher Rylan Youngdale was once again dominant in the circle, striking out five and giving up one run on four hits. “She (Youngdale) did a great job. She pounded that strike zone and she just kept it around the plate,” SA head coach Rusty Tondee said. “The balls that were hit in play, we made plays on today…exactly like we should.” 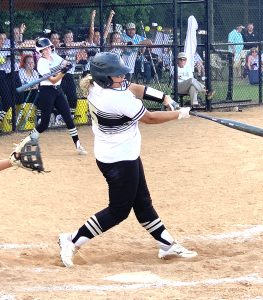 SA catcher Sara Beth Storey went 2-for-3 at the plate with a double, a single and two RBIs in the Raiders’ win over Westwood.
Photo by Ken Gustafson

The Wildcats scored first in the top of the first when Robbie Vann led off the game with a single. McKinley Faircloth doubled to left field, scoring Vann, but the Raiders were able to tag out Faircloth as she tried to reach third base. That would be the only run of the game for the Wildcats.

From there, it was all Raiders. In the bottom of the first, SA scored three runs on three hits, including doubles by Weaver and Morgan Minick and a two-run RBI triple by Sara Beth Storey. The Raiders added another run in the bottom of the second inning. Jadie Burrell led off with a single. Abby Lightner and Alli Dent both grounded out, but Burrell was able to advance to third as a result. With two outs and a runner on third, Minick drove home Burrell on an RBI single to give the Raiders a 4-1 lead. 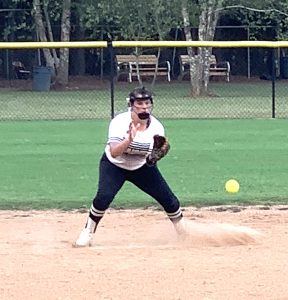 SA shortstop Holly McCain fields a ground ball. McCain went 1-for-3 at the plate with a single and drove in two runs in the 9-1 win over Westwood.
Photo by Ken Gustafson

The big blow came in the bottom of the fourth. SA scored four runs on three hits and took advantage of two errors and a walk committed by the Wildcats. The Raiders began their four-run explosion with two outs in the inning. Storey, Holly McCain and Katie Rogers each had RBI singles in the inning.

SA put the icing on the cake in the bottom of the fifth. T.J. Bowdon came into the game in relief of Lightner. Bowdon led off the inning with a double to left field. Dent then executed a bunt single, advancing Bowdon to third. After Minick drew a walk, the bases were loaded for Storey. She promptly finished the game by belting an RBI single to left field. The game ended with the Raiders winning 9-1. According to GISA rules, a game ends when one team is ahead by eight runs after five innings. 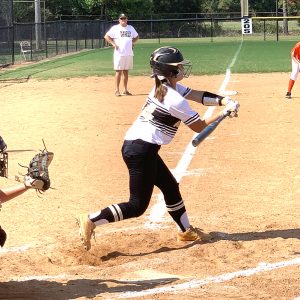 SA third baseman Alli Dent at the plate. Dent went 1-for-4 with a single in the win over Westwood.
Photo by Ken Gustafson

Minick, Storey, Weaver and Roland each had two hits on the day. Storey, Roland and McCain each drove in two RBIs in the winning cause.

With the loss, the Wildcats drop to 1-3 on the season. 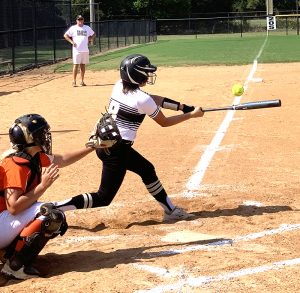 Southland’s Jadie Burrell went 1-for-3 at the plate with a single in the Raiders’ win over Westwood.
Photo by Ken Gustafson

The Raiders will try to stay in the win column when they travel to Cordele to take on Crisp Academy on Monday, August 19. First pitch is scheduled for 4 p.m.

ELLAVILLE – The Schley County boys’ and girls’ cross country teams are ready for another exciting and successful year of... read more