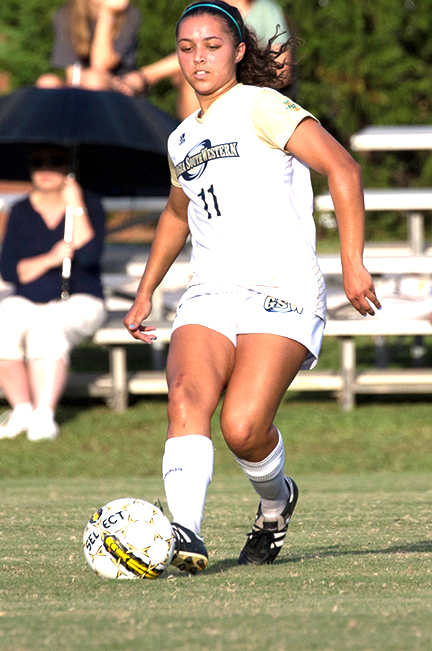 GSW junior midfielder Leila Hamed is one of several returning players who will be expected to provide leadership for the Lady Hurricanes this season. Photo by GSW

AMERICUS – Georgia Southwestern State University Women’s head soccer coach Enrique Rodriguez is optimistic about the upcoming 2019 season. With 10 upperclassmen coming back, he is hoping that the experience these juniors and seniors have will translate to leadership and success on the field.

While Coach Rodriguez is expecting leaders to emerge out of the 10 returning upperclassmen, right now, he says it’s hard to figure out who they will be at this point. “It’s hard to tell. Year by year, it changes,” Rodriguez said. “I try to give the responsibility to the seniors of the team. We’re going to have three starters from last year that I believe are leading right now. They’re showing that they want to lead.”

One of those three players Rodriguez singled out is senior midfielder Alison Rugel.

In 2018, Rugel started 15 games, scored two goals and tallied one assist for GSW. She is the sister of GSW men’s soccer player Julian Rugel. 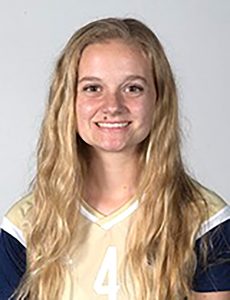 Senior midfielder Michelle Gustavsen is one of three seniors on the Lady Hurricanes’ squad that are already providing the necessary leadership for the upcoming season.
Photo by GSW

As a junior, Mendonca played in 15 games with seven starts and scored one goal.

In addition to Gustavsen, Rugel and Mendonca, other upperclassmen will be counted on to use their past experience to provide leadership and production. One of those players is junior midfielder Leila Hamed. In 2018, Hamed played in 16 games for the Lady Hurricanes and started 15 of them. She gained valuable experience, which should serve her well during the 2019 campaign. 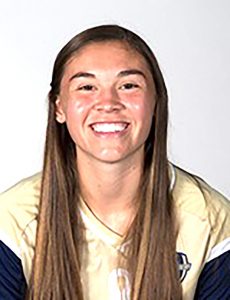 Senior midfielder Alison Rugel scored two goals during her junior season. As a senior, Rugel, along with seniors Michelle Gustavsen and Brenna Mendonca, are providing senior leadership for the Lady Hurricanes.
Photo by GSW

Rodriguez is also very excited about the newcomers to the program. Laura Duran Blanco, a native of San Vicente, Costa Rica, is transferring into GSW from Navarro College (NC) in Corsicana, TX. According to the school’s athletic website www.navarrocollege.edu/athletics, Blanco scored a total of three goals and assisted on six more during her two-year career at NC and helped lead the Lady Bulldogs to a 31-4-2 record and two Region XIV Finals appearances.

Another international player that will be joining the Lady Hurricanes is freshman Geraldine Alvarez. Alvarez is a native of Bogota, Colombia and will expected to provide goal production on the forward line. “Geraldine can give us that flavor of international soccer, which is, I think, what we need,” Rodriguez said. 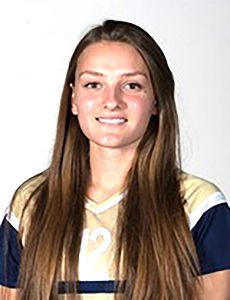 GSW senior defender Brenna Mendonca, along with seniors Michelle Gustavsen and Alison Rugel, will be expected to provide senior leadership for the Lady Hurricanes this season.
Photo by GSW

Another junior college transfer that Rodriguez is excited to have joined is Gabrielle Sainsbury. A native of Salt Lake City, UT, Sainsbury is transferring in from Utah State Eastern College. Sainsbury will be expected to contribute right away as a midfielder.

In addition to the incoming junior college transfers and freshmen from other parts of Georgia, the Lady Hurricanes will also have some local talent coming in as well. Jenna Cuff comes to GSW from Terrell Academy in Dawson, GA. During her high school career, Cuff scored 53 goals and tallied 19 assists. She was also a 2nd Team All-Area field goal kicker on the football team during her junior and senior years and was an all-state basketball player as well. Cuff will provide depth for the Lady Hurricanes on the forward line.

Haley Sells comes to GSW from the Deerfield-Windsor School in Albany, GA. While at DWS, Sells was an All-Region Honorable Mention selection and helped lead the Lady Knights to the GISA state finals her senior year. Sells will be expected to provide depth along the Lady Hurricanes’ back line. 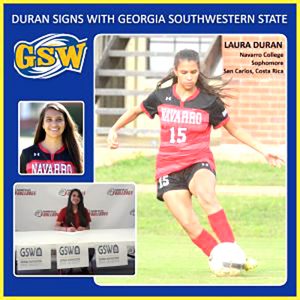 GSW junior defender Laura Duran Blanco is transferring in from Navarro College in Corsicana, TX, where she scored a total of three goals and tallied six assists.
Photo by Navarro College

GSW struggled in 2018. They went 3-14 overall and were winless in the PBC. However, Rodriguez believes that the team is closer to solving the weaknesses that were evident last year. He believes that the incoming freshmen and transfers, as well as the returning players, will help address those weaknesses. “We were very aware of what we needed and I think this class is going to help us close the gap a little bit,” Rodriguez said.

The PBC is an extremely tough conference. It’s one of the toughest women’s soccer conferences in NCAA Division II. A year ago, six PBC teams earned berths into the NCAA Division II national tournament. While Rodriguez is well aware of the difficult task at hand, he and his squad are not afraid to challenge themselves against top-notch competition. “The way that I see it, I love to be in the Peach Belt because of that. Every game is an opportunity. We cannot just see it as ‘Oh it’s too tough and that’s it’. No. It’s a great opportunity for us because that’s what everybody will love playing against the best. We try to get closer and closer,” Rodriguez said. 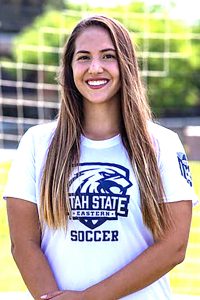