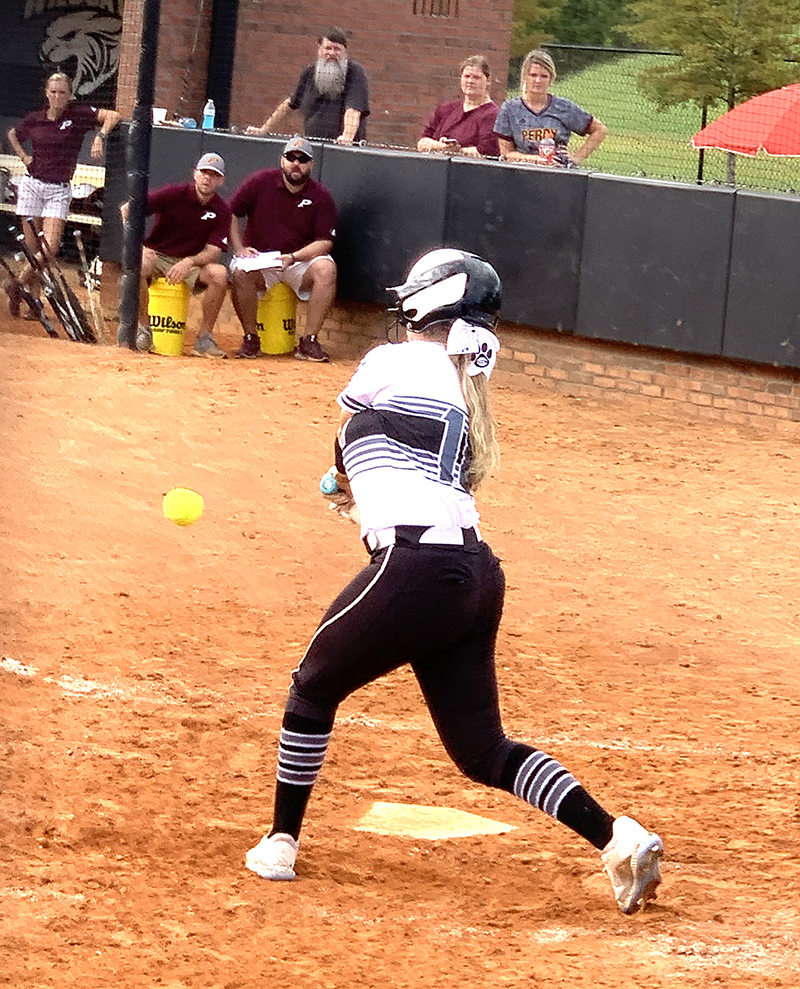 Schley County’s Rene Rix drove in the winning run with an RBI single in the bottom of the sixth inning to help lead the Wildcats to a 4-3 victory over Perry. Photo by Ken Gustafson

ELLAVILLE – For Schley County’s Rene Rix, there was no better way to introduce herself as a varsity player on the Schley County Wildcat softball team than to drive in the winning run. In her first-ever varsity start, Rix went 2-for-3 at the plate, including an RBI single in the bottom of the sixth inning, to help give the Wildcats a 4-3 win over Perry (PHS) on Monday, August 19, at Schley County High School (SC).

“She’s a strong girl. She had a good day at the plate,” SC head coach Jody Sellars said. “She hit the ball hard every time she came up.”

The score was tied 3-3 with one out in the bottom of the sixth inning. Landry Whaley drew a walk off of PHS starting pitcher Madison Homen. Maddie Walker followed that up with a single, setting the stage for Rix. With runners at first and second and one out, Rix hit a line drive into right field, scoring Whaley from second to give the Wildcats a 4-3 lead. That would prove to be the winning run for SC.

SC starting pitcher Saige Whaley was able to hold the Panthers in the top of the seventh to secure the win. 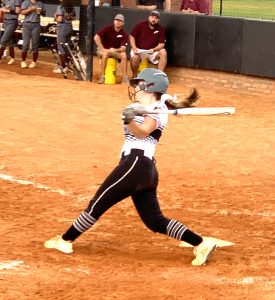 Schley County catcher Landry Whaley belted a solo home run in the bottom of the second to help lead the Wildcats to the 4-3 victory.
Photo by Ken Gustafson

The Wildcats hit the ball extremely well in this game. They scored four runs on 11 hits and committed two errors. “Defensively, we did a great job until the fifth or sixth inning. I can’t remember what inning it was,” Sellars said. “We had a walk and ended up with two or three errors in the inning. I’ve been telling the girls we’ve always pitched and played defense and if we don’t do those things, we usually don’t win. We’ve been preaching offense recently because we haven’t been hitting it very good and I thought we swung the bats a lot better today than we have been in the last couple of games. Hopefully, we’re starting to trend in the right direction. The idea is not to peak right now. The idea is to peak in a month. It’s a work in progress. I like where we’re at and I like where we’re headed.”

The Panthers scored the first run of the game in the top of the first inning when Raegan Stella belted an RBI double, scoring Terra Odom from second base. However, Stella tried to reach third and was thrown out. That would end up being a key play in the game. 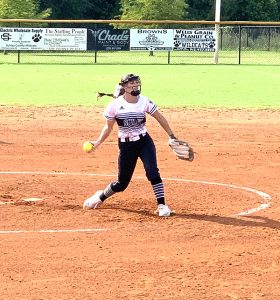 Schley County starting pitcher Saige Whaley gave up only three runs on three hits to help lead the Wildcats to a 4-3 win over Perry.
Photo by Ken Gustafson

The Wildcats countered with two runs in the bottom of the first. Alexis Bradshaw belted a lead off triple into right field. Tamia Kelley then hit into a fielder’s choice, scoring Bradshaw from third. After Nyiah Kelley singled and Saige Whaley flew out for the second out, Hannah Crawford drove home Kelley to give the Wildcats a 2-1 lead.

Saige Whaley pitched another strong game for the Wildcats. She pitched the entire game and gave up three runs on three hits. She walked five and struck out one. 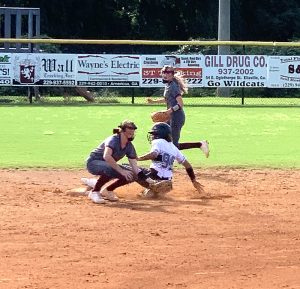 For the Panthers, Raegan Stella, Abby Usery and Madison Homen each tallied one hit. Homen was the starting pitcher for the Panthers. She pitched six innings and gave up four runs on 11 hits while walking two batters. 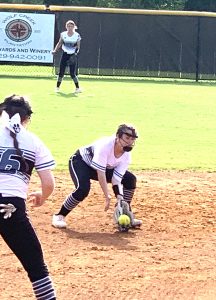 Schley County shortstop Hannah Crawford fields a ground ball and throws out a runner in the Wildcats’ 4-3 victory over Perry.
Photo by Ken Gustafson

With the win, the Wildcats improve to 6-1 on the season and are 2-0 in region play. With the loss, PHS drops to 6-2 on the season.

The Wildcats will take the field on Wednesday, August 21, when they host Bleckley County at 5 p.m.