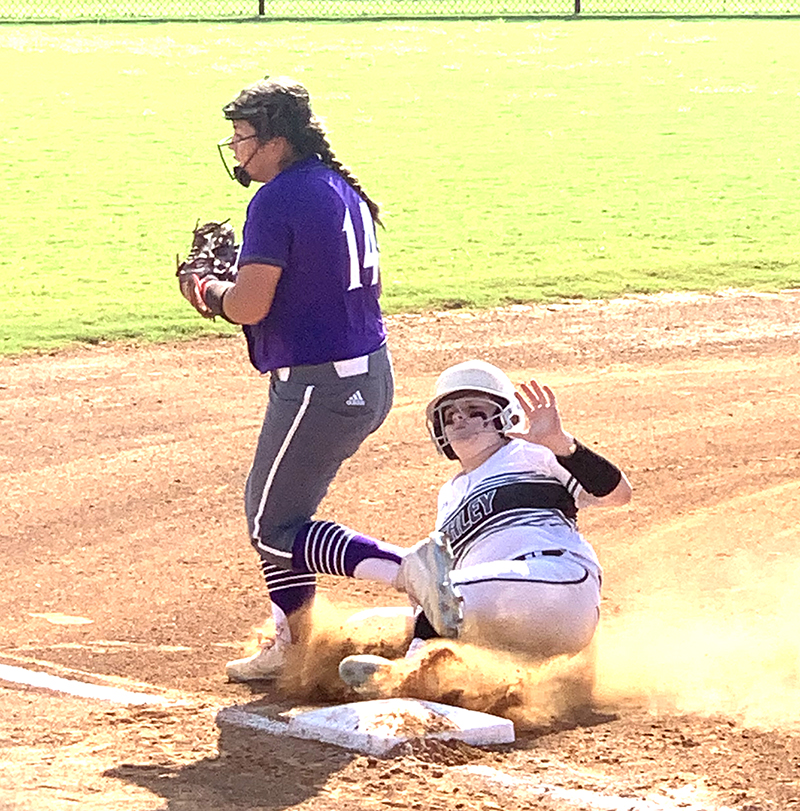 Schley County’s Maddie Walker slides into third base safely. Walker drove in two runs on an RBI single and scored two runs as a courtesy runner. Photo by Ken Gustafson

ELLAVILLE – On Wednesday, August 21, the Schley County Wildcat softball team did what they normally do to their opponents. They used aggressive base running and timely hitting to score nine runs in the third inning on their way to a 13-1 rout over Bleckley County (BC) at Schley County High School.

“We had a few dink hits early and we got the bunts down. When we get the bunts down and we hit the ball a little bit, we’re really dangerous,” SC head coach Jody Sellars said. “I’ve been saying to the girls to play good defense and pitch well. The last thing I told them was that you have to play at a high level in every facet of the game and I thought we did that. We executed everything that was called. We played a pretty solid game. When we do that, we usually have a pretty good result.” 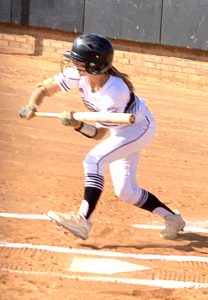 SC starting pitcher Saige Whaley had a normal day in the circle for the Wildcats. Whaley pitched three innings, allowing only one run on three hits. She walked none and struck out three batters. Ashlyn Childs came on to pitch in relief of Whaley. Childs pitched one inning and allowed no runs on one hit.

The Wildcats jumped on the board first in the bottom of the first inning. Alexis Bradshaw led off the game by reaching on an error and then stole second base. Tamia Kelley then hit into a fielder’s choice, advancing Bradshaw to third. Nyiah Kelley then drove home Bradshaw on an RBI single to give the Wildcats an early 1-0 lead. 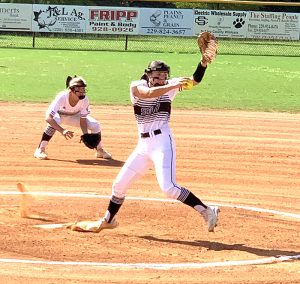 Schley County starting pitcher Saige Whaley gave up one run on three hits and struck out three batters to help lead the Wildcats to a 13-1 victory over Bleckley County.
Photo by Ken Gustafson

SC added their second run of the game in the bottom of the second inning. Landry Whaley led off the inning with a walk. Maddie Walker was brought in as a courtesy runner to run for Whaley. Devane then executed a bunt single, but the Royals committed an error, which allowed Walker to score. DeVane tried to reach third on the play, but was thrown out for the third out of the inning.

The Royals were able to score a run in the top of third inning, but the Wildcats scored nine runs on seven hits in the bottom half of the inning. They also took advantage of two errors committed by the Royals. The Wildcats would later score two more runs in the bottom of the fourth inning to end the game. Landry Whaley led off with a double and DeVane drew a walk, putting runners on first and second with one out. Both Whaley and DeVane advanced to third and second respectively on a passed ball. Walker was brought in to bat for Rene Rix, who was 1-for-2 on the day. Walker then drove in both Whaley and DeVane on an RBI single to give SC a 13-1 lead. At that point, the game ended due to rules on run differential.

With the win, the Wildcats improve to 7-1 on the season. Since their 6-5 extra-inning loss to Southwest Georgia Academy on Tuesday, August 6 to open the season, the Wildcats have won seven straight games. They will try to increase their winning streak to eight when they head to Macon on Monday, August 26, to take on Mount de Sales Academy. First pitch is scheduled for 5:30 p.m.