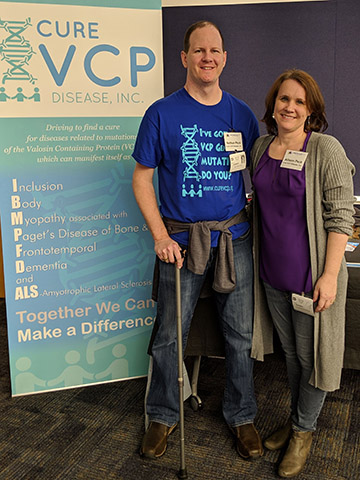 Nathan and Allison Peck at Rare Disease Day in February at the NIH in Washington, D.C.

Peck, 43, is the CEO of Cure VCP Disease Inc. Peck and his wife are both Georgia Tech engineers. He went on to earn an MBA and master of science in civil and environmental engineering from MIT. Peck is one of only about 500 people worldwide who have been diagnosed with VCP disease.

In his presentation to Kiwanis, Peck explained that he retired a year ago after being diagnosed with adult-onset VCP disease. Now, he is focusing on patient advocacy work.

He shared these facts about rare diseases:

Peck told the club that he grew up knowing about the disease because it inflicted his mother, but he was only diagnosed a few years ago. The symptoms of VCP disease took the lives of his mother and aunt. His two uncles also currently have the disease.

Peck explained what VCP is. VCP disease is a mutation of the VCP gene. When the VCP gene malfunctions, “trash” accumulates in the cells and may cause diseases in the nervous system, neuro-muscular system, skeletal system, among others. He said the first symptom of VCP disease is often muscle weakness (myopathy) which can also affect the respiratory and heart muscles. VCP mutations can also result in some Parkinson’s disease, Paget’s disease of the bone, ALS or Lou Gehrig’s disease, and frontotemporal dementia.

The only way of diagnosing VCP disease/IBMPFD is through genetic testing. More people are now being diagnosed with the disease as doctors become aware of the disease and genetic testing becomes more readily available. He said that genetic testing was recently done across Iceland and found 1 in 7,000 had the VCP mutation, so VCP disease is probably more common in the global population than was previously thought.

He and his wife started the nonprofit in 2018, with the challenge of finding people who have been diagnosed with VCP. The disease is autosomal dominant, meaning that if a parent is a carrier, offspring have a 50-50 chance of also developing the gene mutation. He also shared the following facts:

Peck says patients need to be organized in their fight to find answers about VCP disease. “The value of a patient advocacy group is you have all these researchers and science, and they’re all working independently; they cite each other’s articles. You have different organizations globally who are doing this stuff but they’re not talking to each other. You have the patients and caregivers … who are all looking for help. You have the FDA and the NIH providing funding or doing their own thing. You have biotechs and pharma … doing their thing. You have other nonprofits such as the Muscular Dystrophy Association, and other different entities. And the patient advocacy organization is the one interfacing with all of these organizations … and making sure they’re all talking to each other,” he said.

Peck said he and Allison have been “blown away” with what they are learning. They are thankful that so many researchers and scientists are willing to work with them. He had conversations with three different VCP researchers earlier in the week and they didn’t personally know each other. “They know of each other’s science, but they’ve never met each other, and we’re going to fix that,” he said.

The Pecks have attended many conferences in the past 18 months, across the nation, and found that some neurologists had never heard of VCP disease. “We’ve got to put materials in their hands,” he said. He said VCP disease was recently recognized on the MDA website which is “a big feather in their cap” because now primary care physicians and patients looking for answers can find Cure VCP Disease.

Through Cure VCP Disease, the Pecks have also created a patient registry. When researchers at different institutions have their own patient registries, “it’s fragmented and segmented.” Cure VCP has the official patient registry for the disease. “We’ve been working our tails off trying to get patients to register … because what happens is, you go to a drug company or you go to a research outfit, and you can present the patient list … they get much more excited about working with you,” he said.

Fundraising is of course another piece of the Pecks’ nonprofit. “Our goal is to continue to stimulate interest in VCP with the researchers with the NIH and the FDA. We’re fundraising but our goal is to be able to offer grants to researchers,” he said, adding that research into nutrition has already found that some diets can offset some of the symptoms or “delay the inevitable.”

During Rare Disease Week on Capitol Hill in Washington, D.C., Nathan and Allison met with several members of Congress including Congressman Sanford Bishop. They wrote an appropriations request which has received House approval. He recently visited the offices of Senators David Perdue and Johnny Isakson in an attempt to push funding through the Senate and advocate for the rare disease community.

Cure VCP now has patient calls that reach patients worldwide. “A lot people feel alone,” he said. “They’re spread out and they don’t know that other people (patients) exist.”