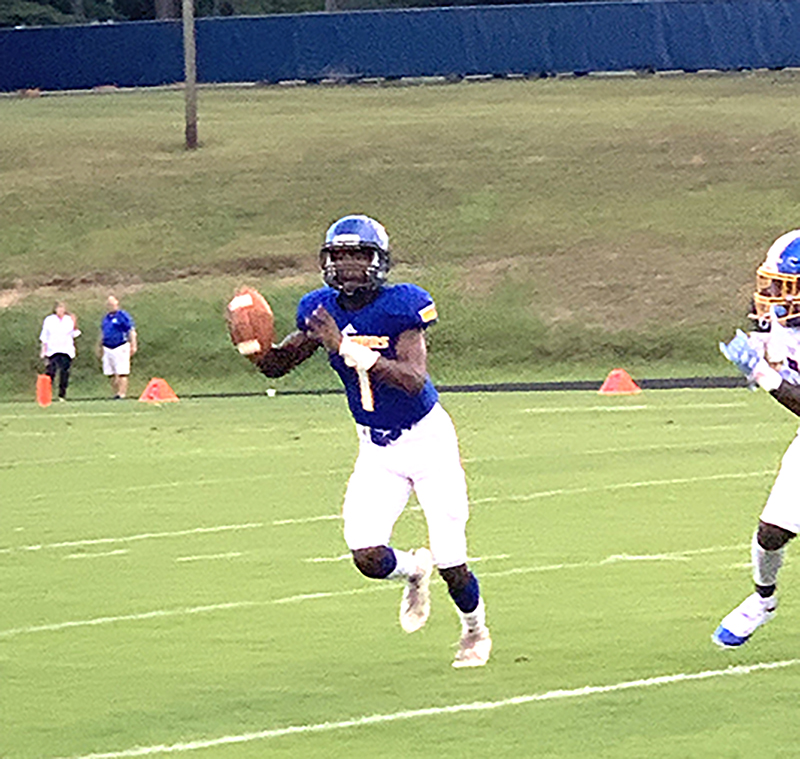 AMERICUS – The Americus-Sumter football team (ASHS) came into Friday night’s season opener against Crisp County (CC) hoping to avenge last year’s 17-14 overtime loss to the Cougars. They wanted to give first-year head coach Ross Couch his first victory as the Panthers’ head coach. Unfortunately, the “Battle of the Flint” went the way of the Cougars once again. Despite having the ball in the red zone (inside the opponent’s 20-yard line) on more than one occasion, the Panthers were unable to come up with points. On the other hand, the Cougars were able to take advantage of their opportunities. Those two factors led to a 29-14 home loss to the Cougars at Alton Shell Stadium.

The Panthers couldn’t have gotten off to a better start to begin the game. Having won the toss, Crisp County elected to defer till the second half, allowing the Panthers to take the ball to start the game. On the first play of the game from scrimmage, ASHS running back Keyvontay Nelson broke through the Cougars’ defensive backfield and scampered 80 yards for a touchdown. The extra point by Alexis Vasquez was good and the Panthers enjoyed a 7-0 lead with 6:44 left in the first quarter. 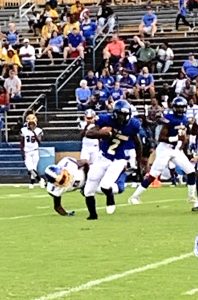 ASHS running back Keyvontay Nelson ran the ball 80 yards for a touchdown against Crisp County.
Photo by Ken Gustafson

However, the Cougars struck back as they were able to move the ball all the way down to the ASHS five-yard line. CC quarterback Jack Carter threw a short touchdown pass to Chris Paul Jr. to get the Cougars on the board. CC decided to go for two points, and Kamron Moate was able to score the two-point conversion to give CC an 8-7 lead.

The Cougars would later add to their lead when running back Marquise Palmer scored from 10-yards out. The extra point was good and CC owned a 15-7 lead by the end of the first quarter. 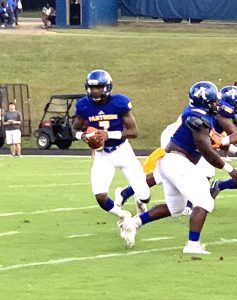 On their last offensive possession before halftime, the Cougars had the ball at their own 20-yard line. However, they made a big play when Carter threw a long pass to Sirad Bryant inside ASHS territory. From that point, the Cougars proceeded to move the ball down to the ASHS 10-yard line. Carter would eventually score on a quarterback keeper with 32 seconds left. The extra point was good and the Panthers trailed at halftime 22-7. The Panthers had a chance to get points during the first half, but a 47-yard field goal attempt by Vasquez was no good. 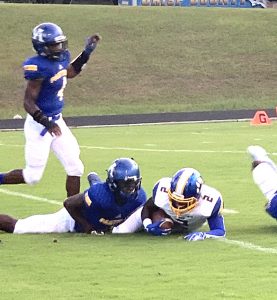 The Cougars got the ball to start the second half, but a penalty pushed them back inside their own five-yard line. They were unable to move the ball against the Panthers’ defense and were forced into a long fourth down situation. They decided to run a fake punt, but the Panthers were able to stop it, getting excellent field position in the process. ASHS was able to move the ball down to the CC 15 yard line, but the CC defense forced them into a fourth down situation. The Panthers decided to try a 34-yard field goal, but Vasquez’s kick was no good once again.

However, the Panther defense was able to stop the CC offense on their next possession and got the ball back for the offense. On third-and-eight from the CC 49, ASHS quarterback Kanova Willoughby completed a pass to Michael Johnson for first-down yardage at the CC 20. A facemask penalty against the Cougars moved the ball down to the CC nine-yard line. Unfortunately for ASHS, they were not able to take advantage of a golden opportunity. On fourth and goal from the four, Willoughby was stopped just shy of the goal line and the ball was turned over on downs to the Cougars. 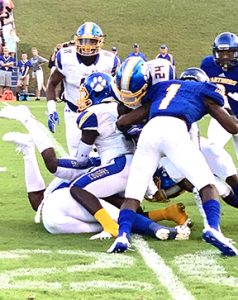 ASHS defensive back Trevian Thomas (1) tries to get into the backfield of the Cougars.
Photo by Ken Gustafson

However, the Panther defense was able to stop CC on offense again to get the ball back for the offense. Willoughby made a big play when he threw a long pass to Johnson, who ran the ball down to the CC eight-yard line. The Cougars stopped the Panthers on three running plays, forcing a fourth-and-goal situation from the CC two-yard line. On fourth-and-goal, Willoughby tried to run for a touchdown, but was stopped by the Cougar defense. The Panthers once again failed to come away with points when they were down inside the Cougars’ 10-yard line.

The Cougars put the game on ice when Willoughby’s pass was intercepted by Preston Lavant. Lavant ran the ball back for a touchdown to give the Cougars a 29-7 lead. Then with 2:57 left in the game, Willoughby threw his second interception of the night when his pass was picked off by J’kobe Harris. 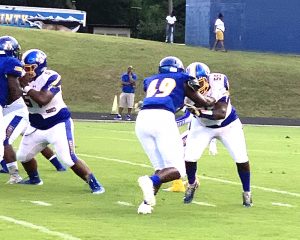 Americus-Sumter defensive lineman Jawarren Lewis (49) fights his blocker to get to the Crisp County quarterback.
Photo by Ken Gustafson

ASHS will try to bounce back when they travel to Albany next Friday night, August 30, to take on Dougherty in their first Region 1-AAAA game. Kickoff from Hugh Mills Stadium is scheduled for 7:30 p.m.