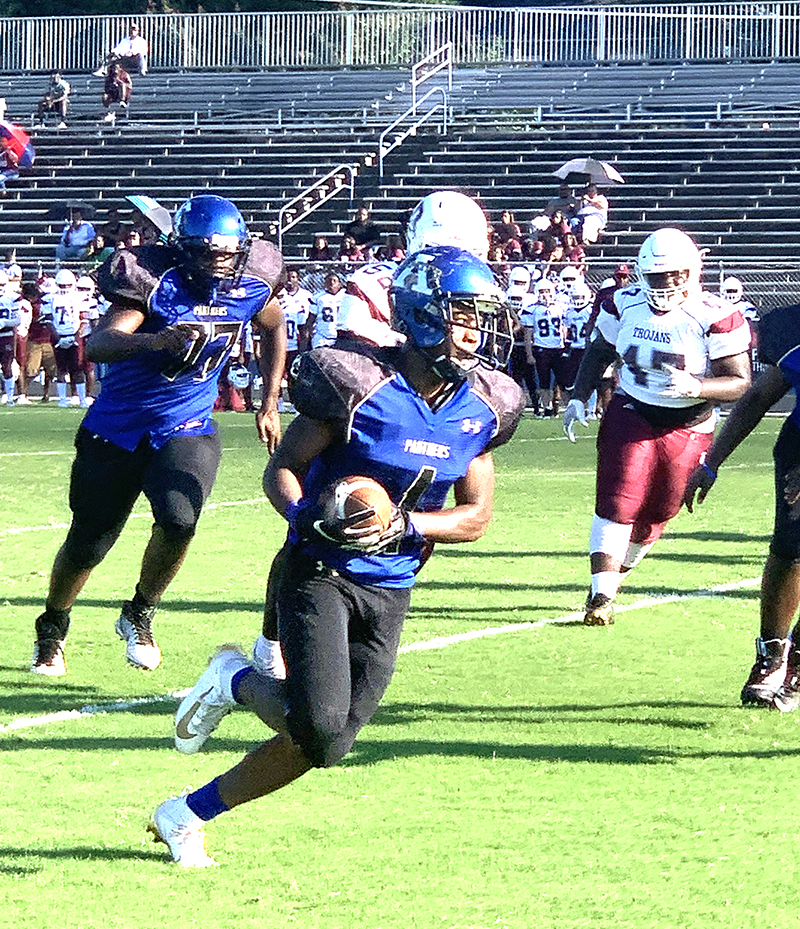 Americus-Sumter JV running back Raikwan Oliver runs the ball in for an apparent touchdown, but it was called back due to a holding penalty. Photo by Ken Gustafson

AMERICUS – These are the Panthers of tomorrow and the future of Americus-Sumter football. They make up the Americus-Sumter junior varsity football team (JV) and they opened their season by battling their way to a 14-6 win over the Dougherty Trojans on Thursday, August 29, at Alton Shell Stadium.

“We played pretty well. There were spots where we can definitely get better, but we’ve got a lot of young guys. It was their first JV game today,” ASHS JV coach Kentrell Mercer said. “They’re grinding during the week. They’ve helped our varsity out. They’re playing scout, so they get a lot of reps during the week. This was the first chance to test it out. I was overall pretty satisfied with them.”

It was a defensive struggle during the first quarter as neither team could put points on the board. Early in the second quarter, the Panthers were able to move the ball down inside the DHS 10-yard line. ASHS running back Raikwan Oliver ran the ball into the end zone for what was thought to be a touchdown, but it was called back due to a holding penalty against the Panthers. Then ASHS quarterback Cameron Evans threw a short pass to Jarod Lewis, who dragged several DHS tacklers with him until he fumbled the ball just shy of the goal line. The Trojans, negating a scoring opportunity for the Panthers, recovered the ball. 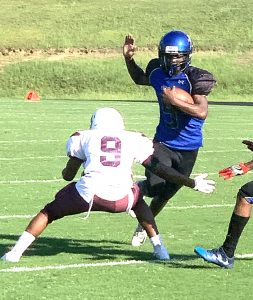 Running back Trauntavious Robinson carries the rock and tries to break a tackle.
Photo by Ken Gustafson

However, the ASHS defense was able to stop DHS on their next possession and got the ball back for the offense. The Panthers were able to move the ball down to the DHS 25-yard line. Evans then scrambled 25 yards on a quarterback keeper for a Panther touchdown. The two-point conversion attempt was no good, but the Panthers had a 6-0 lead.

However, the Trojans struck back. With the ball near midfield, DHS running back Steven Weaver ran the ball 50 yards for a touchdown to tie the game. The extra point attempt was no good, and the score remained tied 6-6 with 1:29 left in the first half.

The Panthers responded by moving the ball down into DHS territory once again. Then Lewis broke several tackles and went about 40 yards for another ASHS touchdown. Lewis scored on the two-point try, giving the Panthers a 14-6 halftime lead. 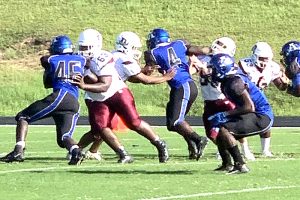 ASHS defensive backs Michael Holt (46) and Jordan Wiley (4) try to get into the Dougherty backfield to make a play.
Photo by Ken Gustafson

In the third quarter, the Panthers caught a break when the DHS punt returner muffed (fumbled) the punt. The Panthers recovered the ball inside the DHS 20-yard line. However, the Trojans’ defense held the Panthers, forcing them to turn the ball over on downs.

The Trojans were moving the ball on their next possession by using a steady ground game, but ASHS defensive end Michael Holt made a tremendous play, tackling a DHS running back in the backfield for a loss.

The Panthers would eventually get the ball back and would once again march down into DHS territory. However, they were not able to capitalize.

With 1:40 left in the game, DHS quarterback Malachi Greene threw a short pass to Jacob Stallworth, who broke a tackle and ran the ball 60 yards for a touchdown. However, the play was nullified due to a block in the back penalty against the Trojans. The Panthers would eventually secure the victory when defensive back Chidery Agbasi intercepted Greene’s pass.

The JV Panthers will take the field next Thursday afternoon when they host Macon County. Kickoff is scheduled for 5:30 p.m.