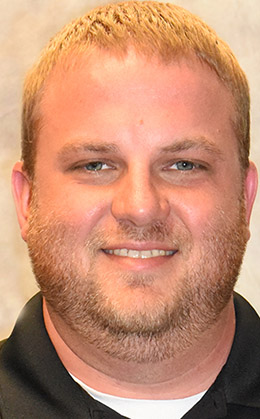 AMERICUS — David Kyle Hartsfield has been hired as a heavy equipment dealers service technology instructor at South Georgia Technical College (SGTC) in Americus, announced SGTC President John Watford, Ed.D., recently. Hartsfield worked with SGTC from 2012 until 2017 until he moved to the Atlanta area to become a full-time training instructor with Yancey Brothers in Austell He and his family are now relocating back to this area.

Hartsfield is a graduate of the SGTC heavy equipment dealer service technology program and received his associate of applied science degree from SGTC in 2008. He was employed as a heavy equipment technician intern at Yancey Brothers in Albany from June 2006 until May 2008. Upon graduation from SGTC in 2008, Hartsfield was employed as a technician at Yancey Truck Centers in Albany, until his appointment to the SGTC faculty in 2012.

He worked as a heavy equipment dealers service technology instructor at SGTC for four years before heading up the college’s new Caterpillar Electric Power Generation Program. He and his family relocated to the Atlanta area and he worked as a training instructor for Yancey Brothers in Austell for approximately a year and a half before returning to this area to rejoin SGTC as an instructor.

As a training instructor for Yancey Brothers, Hartsfield was in charge of conducting training classes for Yancey technicians as well as organizing and preparing training materials needed for each weeks training sessions.

During his time as a technician at Yancey Truck Centers in Albany, Hartsfield was responsible for rebuilding engines and performing general maintenance on different makes and models of diesel engines as well as troubleshooting various mechanical and electrical problems. He also completed all required online International training.

“We are very pleased that Kyle Hartsfield has re-joined the South Georgia Technical College faculty,” said President Watford. “He did an excellence job for us prior to moving to Atlanta. As a graduate of our program and a former instructor with Caterpillar dealer training experience, we believe that Kyle will be an outstanding addition to our heavy equipment dealers service technology program.”

“I would like to thank President Watford and South Georgia Technical College for this opportunity,” said Hartsfield. “I look forward to this new challenge and I am excited to be working with instructors Don Rountree and Keith McCorkle to provide training for CAT technicians not only for Yancey but also for all of our Caterpillar dealers. This is an excellent program and I appreciate the opportunity to return to South Georgia Technical College and provide training for the students and Caterpillar Dealers from across the Southeastern United States.”

He is a 2004 graduate of Schley County High School in Ellaville, and is the son of David and Sharon Hartsfield of Americus. He and his wife, Katelyn, have three children, Merritt, 8; Cason, 5; and Reid, four months.