Whaley shuts down Brookstone’s offense to lead Wildcats to victory 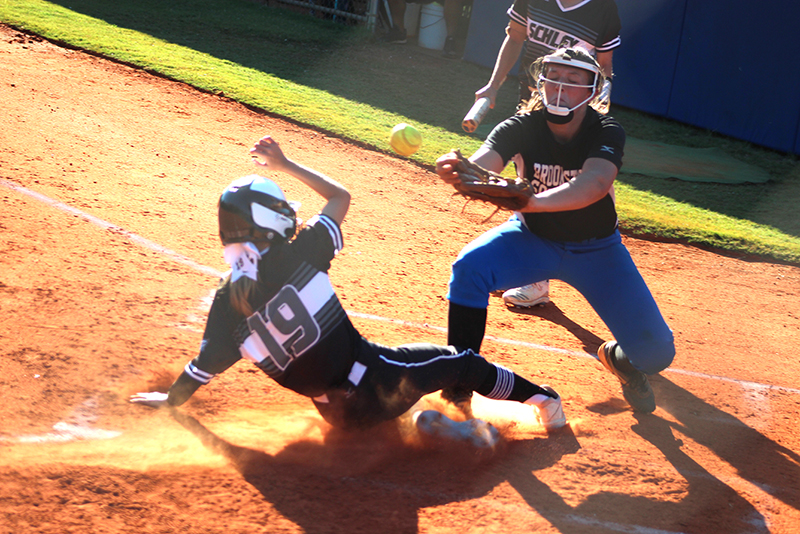 COLUMBUS – Schley County (SC) starting pitcher Saige Whaley allowed only one run on four hits and struck out six batters over seven innings of work to lead the Wildcats to a 5-1 victory over Brookstone on Thursday, August 29, at the Brookstone School (BS).

Whaley also got it done at the plate by going 2-for-3 with two singles and a walk, along with one run scored.

The Wildcats jumped on the board with three runs in the top of the third inning to take a 3-0 lead. With one out, Rene Rix singled to center field and Nyiah Kelley reached on an error by BS first baseman Cydnee Harrison. The error allowed Rix to score and for Kelley to advance to second base. Tamia Kelley then singled to center field, advancing her sister Nyiah over to third. 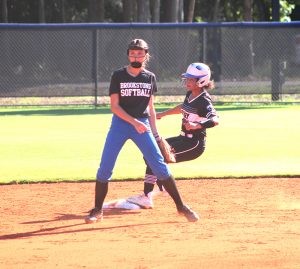 Schley County right fielder Tamia Kelley rounds second and heads to third on her way to scoring one of the Wildcats’ five runs in their 5-1 win over Brookstone.
Photo by Sheila DeVane

Both Tamia and Nyiah Kelley would eventually score as the result of an error committed by BS pitcher Molly Gayles. At this point, the Wildcats had a 3-0 lead.

SC added two more insurance runs in the top of the fifth inning. With one out, Whaley singled to right field. Landry Whaley followed that up with a single to center field, putting runners at first and third with one out. Maddie Walker then hit into a fielder’s choice, allowing Saige Whaley to score from third. The Wildcats got their final run of the game when courtesy runner MacKenzie Pugh scored on a passed ball by the BS catcher.

Neither team had a good day defensively. The Wildcats committed three errors, while the Cougars committed four.

Long led the Cougars’ offense by going 2-for-3 with a single and a double.

Gayles took the loss for the Cougars. She gave up five runs on seven hits and only one of those runs was earned. She walked two and struck out four.

With the win, the Wildcats improve their overall record to 10-1, while the Cougars drop to 3-7. SC returns to action on Tuesday, September 3, when they host Crawford County at 6 p.m.