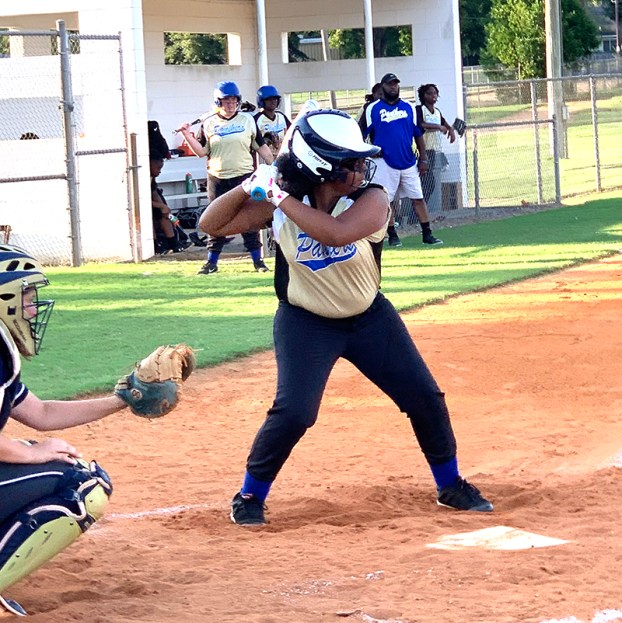 Karina Santos got the only hit of the game for the Panthers in their loss to Pelham. Photo by Ken Gustafson

Lady Panthers struggle to score in home loss to Pelham

AMERICUS – The Americus-Sumter Panther softball team (ASHS) tried desperately to earn their first win of the season when they took the field against the Pelham Hornets (PHS) on Wednesday, September 4, at Americus-Sumter high School. However, the accumulation of walks and hit batsmen led to another ASHS loss. The Hornets were able to take advantage of those things and defeated ASHS 18-0.

The Panthers are now winless on the season at 0-9.

In spite of the loss, assistant coach Eric Brown saw some progress in the team’s fundamentals. “There has been a bunch of improvement, especially on the pitching,” Brown said. “We just have to calm down and make routine outs and we’ll be good.”

Brown was filling in for head coach Coleman Price, who was out with an illness. 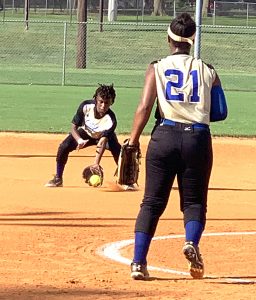 The Hornets scored 11 runs in the first inning, mostly as a result of walks and hit batsmen by ASHS starting pitcher Trinity O’Neal. However, O’Neal was able to find the strike zone on a few occasions and struck out two PHS hitters.

Unfortunately, the Panthers were not able to mount a serious offensive attack. The Panthers had two chances to score a run, but both O’Neal and Tiffany Goodman were thrown out at home while trying to score.

The Hornets went on to score four more runs in the second inning and three in the third to end the game early due to run rules.

The Panthers’ only hit in the game came off the bat of Karina Santos in the second inning when she singled.